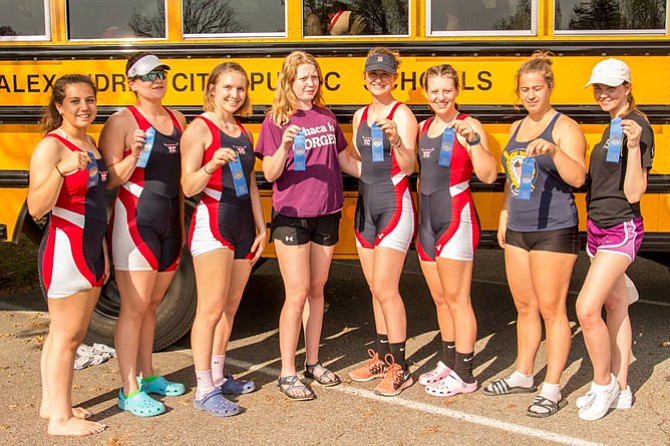 After many veteran women on the TC Williams crew team missed the chance to compete at the weather-shortened April 8 Walter Mess Regatta, the Titan Women came roaring back to the water at Occoquan on April 15 for the Darrell Winslow Regatta. TC also altered their mix of boats and rowers in this still-early season competition.

“It was a fabulous day with many, many close and challenging races,” said TC Women’s Head Coach Patrick Marquardt. “Many of the team’s top rowers raced in the First 4, Second 4, and Junior 4 categories, which was a big change up for them and a great way to end a spring break full of water time.”

The TC Women also showed their versatility and strength in a combined First 8/Second 8/Light 8 race category, with the Titan Women First 8s taking the win with a time of 5:08.0, 2.8 seconds ahead of Woodson. “The whole boat was very relaxed for the race,” said senior Lily Warden. “It was the best race I have had so far this season.”

Senior teammate Ella Benbow agreed, stating that she and her crewmates “really benefited from our spring break of 2-a-day practices. The boat was really in time, and keeping calm and together definitely helped us win by the margin we did.” In addition to Warden and Benbow, Saturday’s First 8 included rowers Hope Parsons, Grace Vannatta, Blythe Markel, Emma Carrol, Grace Hogan, and Grace Fluharty, and coxswain Paige St. John.

Challenging themselves to “race up” against more senior boats, the surging TC Frosh Women, who have posted wins in their first two races of the season, rowed in the same race as the First 8s and finished third with a solid time of 5:19.8. In Women’s Novice 8 racing, the TC Women’s 8A boat won their heat with a time of 5:43.7.

Anxious to compete after their victory two weeks earlier at the Noxontown Regatta, the Women’s JV 8 won their heat early in the afternoon and cruised to victory less than two hours later in the Women’s JV 8 final with a time of 5:16.5, 8 seconds ahead of Walter Johnson High School. The TC Women’s JV 8 rowers include Rachel Sedehi, Cleo Lewis, Marley Osborne, Charlotte Milone, Elspeth Collard, Piper Bucholtz, Chloe Marsh, and Anna Jane Guynn, and coxswain Paula Filios.

On April 22, the TC Women’s Crew team travels to Delaware for the St. Andrews Regatta on Noxontown Pond, while the Titan Men descend on Occoquan for the Ted Phoenix Regatta.