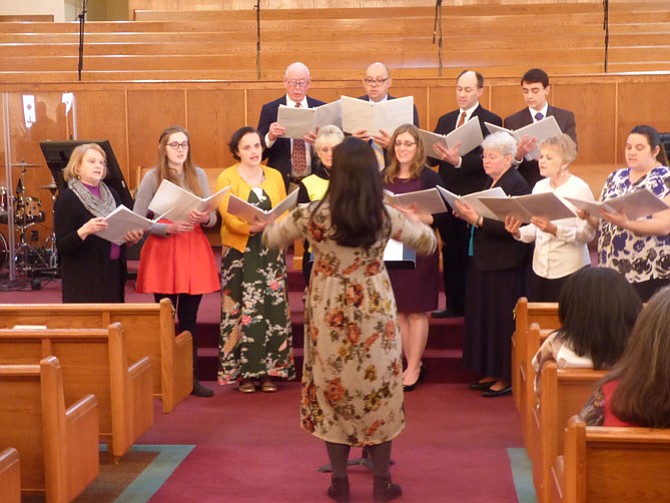 The choir from the Church of Jesus Christ of Latter-day Saints, Mount Vernon, with its director, Mary Nelson. Photo by Mary Paden

The choir from Mount Vernon Unitarian Church with its director, Mark Zimmerman.

Lee District Supervisor Jeff McKay and the Rev. Abraham Smith Jr., pastor of the First A.M.E Church, with three students who read their essays on racism at the service: Grace Hobson, Victoria Laffittie, and Cassandra Burdick.

Mount Vernon and Lee residents commemorated the life and influence of Dr. Martin Luther King Jr. on the 50th anniversary of his death at Bethlehem Baptist Church, Saturday, April 7, at a ceremony that featured essay readings by local students and choir presentations, including an original composition, “Eulogy for Martin Luther King, Jr.,” by Mimi Gonigam Stevens with lyrics based on Dr. King’s sermon “The Drum Major Instinct.” Stevens is a member of the Mount Vernon Unitarian Church choir.

The event was sponsored by Ventures in Community (VIC), a local coalition of about 60 faith communities and nonprofits.

Interspersed with choir presentations, three high school students — Grace Hobson, Victoria Laffittie, and Cassandra Burdick — read their essays answering the question, “How to End Racism in America: What Would Dr. King Do?”

The Rev. Dr. Kate Walker, pastor of Mount Vernon Unitarian Church and co-facilitator of VIC, read a statement from VIC opposing racism and asked the audience to recommit to oppose racism. The statement read, “This community organization of churches, nonprofits and government agencies, recognizes the continued existence of racism in our community and country. Based on the long accepted principles of universal dignity, liberty, equality, and basic human rights, we recommit ourselves to the eradication of racism in all of its insidious forms.

“As people of faith who believe all people are valued, we pledge to look for systemic and individual oppression, and speak up and take action when appropriate. We reaffirm our commitment to respect and encourage unity in diversity — of race, ethnicity, culture, faith and worship, economic status, education, household structure, gender, age, or viewpoint.”

For the finale, two choirs — Mount Vernon Unitarian and the Church of the Latter Day Saints — combined to lead the audience in the Civil War abolitionist song, “Battle Hymn of the Republic.”

VIC was formed 45 years ago to provide shelter for local homeless people. Its members now provide volunteers to staff the hypothermia shelter at Rising Hope Methodist Mission Church from December through March. It holds monthly meetings and sponsors other events. See Ventures in Community – VIC on Facebook.