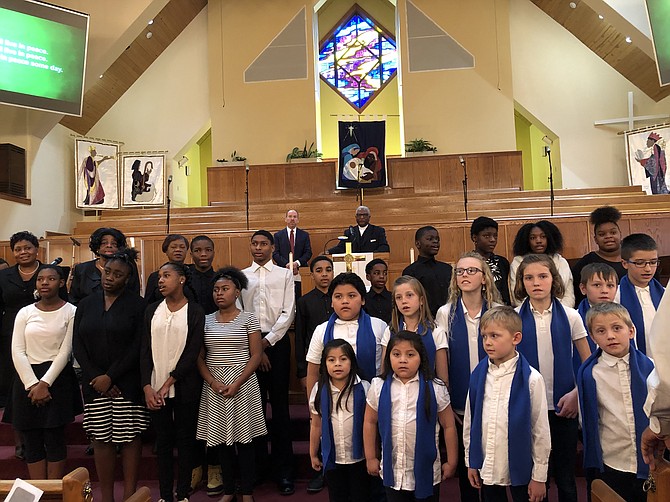 The choirs combined for the finale. Photo by Mary Paden

The 2019 Martin Luther King Celebration at Bethlehem Baptist Church Saturday, Jan. 19, was especially inspiring because of the participation of area youth — both as speakers and choir members.

The winners of an essay contest entitled "What would the world be like if Dr. Martin Luther King had never lived?" read their work interspersed with performances by choirs — two of them youth choirs — and remarks by Rev. Abraham Smith, master of ceremony and pastor of First AME Church of Alexandria, and Joe Fay, Ventures in Community co-facilitator.

The event was sponsored by Ventures in Community, a 50-year-old faith-based group in Mount Vernon.

The winning essay was by Obinna Ekeagwu, a Mount Vernon High School sophomore, who was unable to attend because of a family emergency, but sent a youtube video of himself reading his essay [https://www.youtube.com/watch?v=XuSnKxojlOo], but due to technical difficulties, the essay was read by a member of the AME choir. The second place winner was Jeremiah Finley, a West Potomac High School senior, and third place went to Victoria Laffitte, a Mount Vernon High School sophomore. The contest, open to all high school students in Mount Vernon District, carried cash prizes.

The Bethlehem Baptist Church Women's Choir opened the event, but the show was stolen by two youth choirs, the First AME New Beginnings Choir, and the Home School Chorus of Northern Virginia, which performed separately and then together as the combined choirs and audience sang the civil rights anthem, "We Shall Overcome."

Smith and Fay both remarked on the energy and inspiration that the youth brought to the MLK celebration.

The ceremony closed with a benediction by Keith Davey, president of the Mount Vernon Stake, the Church of Jesus Christ of Latter Day Saints. A collection was split between the youth groups of Bethlehem Baptist and the First AME Church.

Essay 1: If We Never Had a Dr. Martin Luther King?

What would our world look like if we never had a Dr. Martin Luther King?

Acceptance of integration was inevitable, but Dr. Martin Luther King Jr. eased the transition. He was a calming figure at a very volatile period in U.S. history. Dr. King’s legacy of organizing led to most of the activism we see today. Finally, MLK’s principles have inspired oppressed peoples across the globe. A world lacking Dr. King would be one with a bumpier and longer path to black liberation, without civic engagement, and without the universal success of democratic ideals

The volatility of the country at the time made civil rights another polarizing issue. People exploited the anxiety to fear-monger whites and make them more resentful of groups seeking equality. King knew that many in the civil rights movement wanted to fight fire with fire, but his restraint was imperative to passing the Civil and Voting Rights Acts. There was a tug of war between the patient MLK wing of the civil rights movement and the militant Malcolm X wing; it kept a balance between restraint and forcefulness. Without MLK, the movement would have been very aggressive and boiled over, leading to the backlash of an disproportionate military response. This would have further enraged activists who would fight racism “by any means necessary.” This violence would have turned public opinion against civil rights and prevented politicians from supporting landmark civil rights legislation. Dr. King’s tact was vital for building support for black liberation.

Dr. King also built that support through grassroots organizing. Marches on Washington and Selma and the Poor People’s Campaign were because of Dr. King’s charisma and ability to build a coalition of those dedicated to justice. Lacking Dr. King, the civil rights movement wouldn't have successfully organized to bring light to their grievances, leaving discrimination on the backburner. After Dr. King, there were many movements that shaped American society (women’s rights, anti-Vietnam war, etc.). Dr. King’s effectiveness guided them as they sought change. In the absence of Dr. King, civil rights and other American protest movements would not have gained much traction.

Dr. King’s dream of equality didn’t stop at America’s borders. He gave people worldwide the hope that despite their conditions, they can overcome their oppressors and can reach the promised land of freedom. Movements like anti-apartheid in South Africa and anti-communism in Europe fought for MLK’s ideals of freedom and justice. For example, Dr. King’s non-violent approach and his resilience influenced Nelson Mandela, another black liberation icon. Dr. King’s success serves as a precedent for oppressed peoples around the world. This is paramount when fighting an institutional enemy that has tormented groups for so long. The absence of Dr. King would have reduced the likelihood of other MLK-like figures leading their own people to freedom. Without Dr. King and his legacy, despots would sleep better at night.

In conclusion, a world without MLK is a less free, less inspired, and less equal one. It would deprive movements at home and abroad of an example of how to fight for freedom and justice peacefully. It would also make the civil rights movement less civil, thus decreasing its public support. Without Dr. King’s persistence, patience, and inspiration, black Americans would have walked a longer and bloodier road to equality.

Dr. King changed the world and gave people hope, and he asked for nothing in return.

Without Dr. King, the world would not have seen our people beaten by police, fire hoses turned on them or heard the loud barks of dogs snarling for the flesh of people who only wanted equal rights. This was important because when people saw peaceful children treated like animals they could finally see there was a problem.

Without Dr. King, we wouldn’t know people of different faiths and beliefs would come from all over the country to help a minister of a different faith or people they didn’t know and who didn’t look or sound like them.

[We wouldn’t know] that a person of color could win the Nobel Peace Prize and be honored by the highest officials in other countries. People would not know that a white housewife or a young adult Negro and two white men would leave home to support Dr. King.

No one knew those young men would die side by side. Each listening to their friend get shot. Hearing their friends’ bodies fall to the ground and knowing the next death would be theirs.

Kids, parents and grandparents, news people, preachers and teachers wanted change because Dr. King’s life, words and actions touched hearts in every nation and every land.

Because of Dr. King, the struggles of black people could no longer be ignored. His voice told our stories and gave us courage.

Dr. King taught people how to march on Washington for change. His actions made a path for a legally blind black man to be the governor of New York. He made the way for a little black girl to be a multi-billion-dollar talk show host, magazine owner, and movie star.

Before Dr. King, biracial child was called a lot of things but they would never be called the President of the United States.

People would have never thought a woman could be nominated for President of the United States. Or imagined that two native American women, a Muslim woman and other women of different races, religions and backgrounds would be sworn into Congress.

God inspired Dr. King to see an America, where people are judged by the content of their character and not the color of their skin.

I believe Dr. King’s words, actions and life made the world look like this because God is merciful. If we never had God’s mercy the world would look like a place I don’t want to be.

Essay 3: ‘Different in the Worst Way’

What would our world be like if Martin Luther King never lived? There is an old saying that, “You can’t miss what you never had.” Yet, since we did have Rev. Dr. King, Jr., we know and understand that he was instrumental in fighting and trying to correct many of the injustices and inequalities that African Americans face in America. If we never had a Rev. Dr. King, Jr., our world would have been different in the worst way.

Rev. Dr. Martin Luther King Jr. made a huge impact in the world, especially to the black community in the United States. Before Dr. King, Blacks were treated as second class citizens. People used to think and some still think today that black people are wild animals and are not worth being treated fairly because of the color of their skin. The world has gotten better with race issues since Dr. Martin Luther King, Jr., but injustice, inequality and racism have not gone away fully.

Dr. Martin Luther King Jr. accomplished many things in the short time he was alive. For example, he led the Montgomery bus boycott, which was the beginning of the Civil Rights movement, and he was the youngest recipient of the Nobel Peace Prize. He won the prize for non-violent resistance to racial prejudice in the United States. He was behind African Americans obtaining basic civil rights and voting rights. Dr. Martin Luther King Jr. organized and led many marches for voting rights of Blacks, desegregation, labor rights and other basic civil rights. His movement influenced the case of Brown v. Board of Education in 1957, nine black students (Little Rock Nine) were going to school but, were denied in the “white classes,” leading to the Supreme Court decision that separate but equal schools were unconstitutional. His efforts led to the Civil Rights Act of 1964 and the 1965 voting rights act. Even though that was 62 years ago we still, to this day, have issues with race, segregation and unequal educational systems depending on where you live.

Today many types of racism have emerged. For example, in 2018 when a white Starbucks manager called the cops on two black men for not purchasing any products and waiting on another friend. Similarly, a white female called the cops on a black man for being in his own luxury apartment complex because she felt he did not belong there. Dr. Martin Luther King Jr. inspired and invoked a fire inside of minorities to believe that change is necessary. His philosophy of nonviolent resistance was not supported by all but proved to be effective. His philosophies and methods to obtain equality were, in the end, the best way for change.

A world without Dr. Martin Luther King Jr. is a world I’m glad I don’t have to experience. It would be a world with slower or no change in race relations. There would be very few opportunities for a better education or jobs, we may still be sitting in the back of buses, drinking from a “Black Only” water fountain with no aspirations to run for President of the United States and maybe not even able to vote. We would not have half of the rights we have now. Dr. Martin Luther King Jr. courageously led the way, so that everyone could let Freedom Ring and be treated with the same respect.