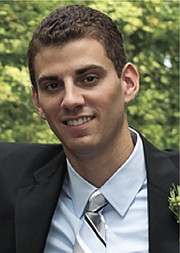 Adam Christopher Toohey, 30, passed away on April 15, 2018 after a two-year battle with colorectal cancer.

The son of Michael Toohey and Jean Reimers, Adam was born on October 10, 1987 in Fairfax and grew up in Great Falls. He was a graduate of East Carolina University where he graduated with his Bachelors of Kinesiology. He was a huge East Carolina, Washington Redskins and Baltimore Orioles fan. Adam also received his Masters in Leadership Administration from the University of Oklahoma. While at OU, he worked as a graduate assistant and a strength and conditioning coach. He was proud to have worked with the OU baseball team when they won the Big 12 Championship.

After graduation, Adam owned and operated Toohey Athletic Performance, where he trained children from elementary to college age.

He enjoyed playing and watching golf, baseball, and football. He was an outdoorsman and also an Eagle Scout. Adam enjoyed goose hunting, deer hunting and trout fishing.

Adam was an amazing young man. He never complained during his courageous year battle with cancer. The family would like to especially thank Encompass Home Health and Hospice for their great care and support they gave to Adam and the family.

In lieu of flowers, you may make donations to Ronald McDonald House at OU Children’s Hospital 1301 NE 14th St, OKC, OK 73117, or http://rmhc-okc.org/get-involved/donate/