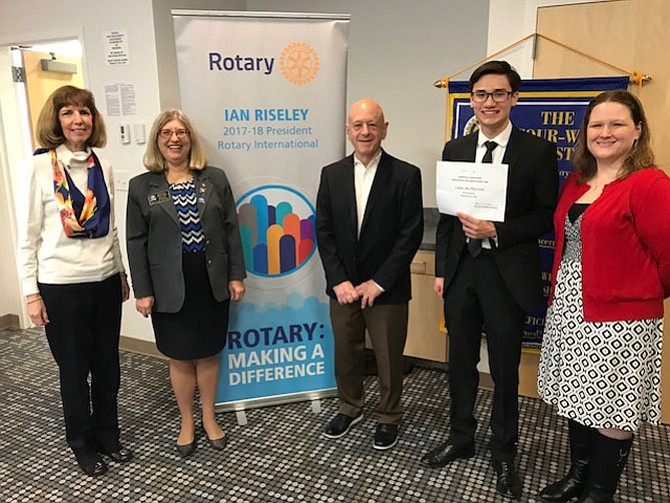 For the Rotarians in the audience, the statistics were familiar: 35,000 Rotary Clubs, 1.2 million Rotarians in over 200 countries, service projects which vary from providing clean water in third world countries to starting a bully prevention program in local schools. But, the difference in hearing these statistics was their delivery by enthusiastic high school students who entered the Rotary District 7610 speech contest.

The Rotary International theme this year is “Making a Difference.” The five speech contest finalists, sponsored by five Rotary clubs in District 7610, impressed the audience as youth who will make a difference in the world. They spoke about what Rotary meant to them, after they learned about the many clubs and their service projects.

Liam McPherson, a junior at Fairfax High School, sponsored by the Fairfax Rotary Club, placed first in the contest. As first place winner, he won a cash prize. His speech took the broader view of how nations can make a difference in the world by improving the quality of life for their citizens. When he spoke about Rotary, he referenced his mother, who received the polio vaccine from Rotarian volunteers in the Philippines. This was the first of many countries which Rotarians and their partners would visit to stop the spread of polio starting in 1978. Today, only two countries remain with endemic polio: Afghanistan and Pakistan.

The Fairfax Club is very proud of Liam. His poise, delivery and enthusiasm for Rotary impressed many throughout the contest. Liam’s club sponsor was Barry Gordon of the Rotary Club of Fairfax. “Liam gives us hope that more young people like him will provide leadership of which we will be proud,” Gordon commented after the contest.

Liam was accompanied by his Forensic (speech) coach, Heather Davids of Fairfax High School. Davids added, “Liam is a natural speaker, but it has been my honor to watch him develop into a passionate and persuasive speaker over the last three years.”

Liam was among the top five student contestants; all sponsored by area Rotary clubs. Rotary District 7610 consists of 57 Rotary clubs. Liam, and the other four high school speakers, from as far as Louisa County to as close as Springfield will speak again at the Rotary District Conference held over the last weekend in April at Kingsmill in Williamsburg, Va.

For additional information on Rotary International or the Rotary Club of Fairfax, visit: www.fairfaxrotary.org.