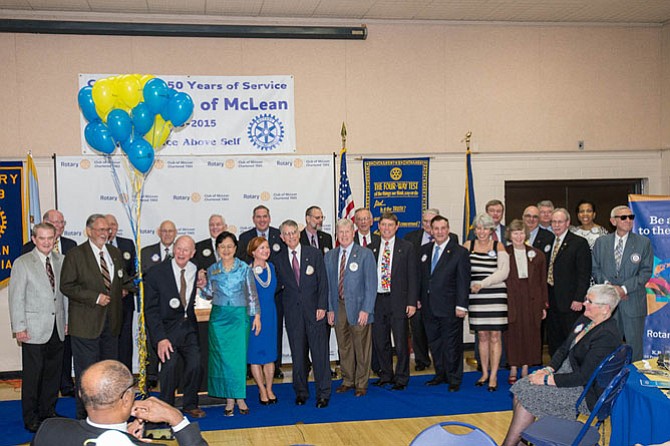 Twenty-five past-presidents of the Rotary Club of McLean reunited at the 50th Anniversary celebration.

Tuesday, Nov. 10 marked the fiftieth anniversary of the Rotary Club of McLean. The club celebrated with a catered reception at the McLean Community Center attended by past and present members, representatives of neighboring clubs, club friends including Dranesville District Supervisor John Foust, and representatives from Rotary District 7610.

In 1965 Dan Nastoff, a member of the Falls Church Rotary Club, was commissioned by the Rotary District Governor to organize a new club in McLean. A State Department employee, Nastoff became involved in Rotary when his landlord in Istanbul, Turkey, invited him to a Rotary meeting and he became a member. He found Rotary a perfect vehicle for expressing his own desire to serve, and for its ability to bring together people from all walks of life.

During the summer of 1965, Nastoff called on scores of McLean businessmen, most of whom knew nothing of Rotary, scheduled and convened Tuesday luncheon meetings at the Pikestaff Restaurant, and did all the paperwork to have the club accepted by the District and Rotary International. The charter for the club was approved on Nov. 10, 1965 with 22 members. Nastoff had to forego the honor of the first presidency of the club as the State Department assigned him to Pakistan where he joined the Islamabad Rotary Club. Local businessman George H. Wilson became the club’s first president.

The club quickly became active in the McLean Community identifying projects of community support, and providing volunteer and monetary support..

OVER THE YEARS the club has met at many local locations. The club moved its meeting location to the Evans Farm Inn where it held its Tuesday luncheon meetings for many years. In January, 2000, the club moved to the Kazan Restaurant, then to the Pulcinella Restaurant, and in 2002 to its current location in the Fellowship hall of the Lutheran Church of the Redeemer. Lori Shepherd and later Jimmy Weissenberger have catered the clubs lunches.

The club has also met at a number of interesting and unusual locations including the CIA, the Air Traffic Control Center in Leesburg, the State Department with lunch at the Diplomat Club, and the McLean Police and Fire Station.

1974 marked the beginning of McLean Rotary’s food and drink stand at McLean Day, an event designed both for fundraising and fellowship. Since then the Rotary tent has been the place to come for hot dogs, pizza, chips, water and soft drinks.

The McLean Club has been instrumental in starting other clubs. In 1983, it sponsored the Tyson’s breakfast club. In 2002 it co-sponsored the Gainesville Club, and later the Great Falls Club and the Ashburn Club. The club has also supported Interact Clubs in our local high schools for many years.

Over the years this event changed and became a fundraiser co-sponsored by several other clubs in Northern Virginia as Monte Carlo Night. This year Monte Carlo Night raised over $60,000 for local charities with the amount shared by the sponsoring clubs.

The Youth Achievement Awards program has been continued by the Rotary Club of McLean and awards are made annually at a regular luncheon meeting. The club also sponsors college scholarships for students with outstanding academic standing but with limited financial support.

In the fall of 1984 the club presented the first Rotary Cup trophy to the winner of the annual Langley High School vs. McLean High School football game, always the last regular game of the season for both schools. In 1995 the club initiated a Women’s Rotary Cup for field hockey teams at the two schools. Girls and boys basketball were added in 2005.

The club has been a standout at the Rotary District level for many years. In 1981, and again in 2007, McLean was named the Most Outstanding Club in District 7610. In 2010 it received the Ylonen Trophy for the highest total giving for the previous three years in the district. That year the club achieved total historical giving to all Rotary causes of $500,000. In 1987 Rotary International began to emphasize the eradication of polio as a major organizational goal. That year the McLean Club donated over $5,000 to Polio Plus. The club has contributed in a major way to eradicating polio each year.

While the club throughout its history supported international projects, the support became more personal in 2005 when the club committed to establish a free reading and lending library in Meerut, India. Local Rotarian Sam Agarwal worked with his brother in the Rotary Club of Meerut on this project. Several container loads of quality books were sent to India to begin the library. The club has also supported Partner for Surgery in Guatemala by funding a hospital surgical suite. Partner for Surgery is a nonprofit founded by club member Dr. Frank Peterson. In 2007, club member Lois Wilson, DDS, led a Group Study Exchange team to South Africa. That trip inaugurated another long-term commitment to the country of Swaziland, first to provide solar water heating systems at an orphanage, then to help fund an ambulance for the Salvation Army there, and later to provide technical assistance and dental support to a special needs school. In 2010, member Bob Hahne embarked on his goal of packaging one-million meals for Stop Hunger Now. As of this year the McLean Stop Hunger Now program has packaged over 1.3 million meals. McLean Rotarian Bob Jansen has also been instrumental in helping to provide fresh water for several schools and communities in Uganda.

THE ROTARY CLUB OF MCLEAN has played an active and important part in the McLean community for fifty years. Members of the community are invited to join the Rotary Club of McLean for their weekly luncheon meal. They meet every Tuesday at 12 noon in the Fellowship Hall of the Lutheran Church of the Redeemer, 1545 Chain Bridge Road, McLean. The Rotary Club of McLean is a service club actively involved in the McLean Community and in international areas related to our community. If you live and/or work in the McLean area and are interested in knowing more about Rotary and the Rotary Club of McLean, or if you are a Rotarian who has recently moved into the McLean area, consider joining them for a free lunch. Email at mcleanrotary.va@gmail.com so they know you are coming. For additional information visit www.mcleanrotary.org.