A Day in the Life of Mayoral Opponents in Alexandria: Incumbent Mayor Allison Silberberg
Votes

A Day in the Life of Mayoral Opponents in Alexandria: Incumbent Mayor Allison Silberberg 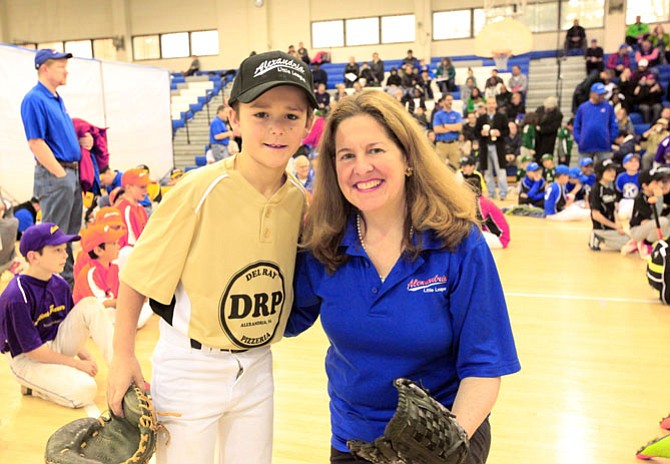 Allison Silberberg had a busy day ahead of her. After an early morning tree-planting event was cancelled, she was picked up at around 8:30 a.m. at her Parkfairfax condo by volunteer Boyd Walker in his red Toyota Prius.

“I was answering emails this morning and time got away from me,” Silberberg said as she got in the back seat of the car. “I don’t clock in. I’m constantly… Not just on call, but doing. The calendar doesn’t really capture it all.”

That day, Saturday, April 7, was freezing cold, and Silberberg was scheduled appear at the campaign kickoff for Democratic U.S. Sen. Tim Kaine at Jefferson-Houston School, throw the ceremonial first pitch for the Alexandria Little League’s 2018 season at Hammond Middle School, attend the funeral and reception of an Alexandria icon at the Basilica of St. Mary, speak at an event at the Mark Center Hilton, go door knocking, and finish the day with a concert by the Alexandria Symphony Orchestra.

If you don’t know the 55-year-old Silberberg, who prefers to go by Allison instead of Madam Mayor in public, she is a writer and photographer, is single but occasionally dates, has few hobbies outside of her political life and greets city staff with hugs instead of handshakes. She was born and raised in Dallas, Texas, and received a bachelor’s degree in international relations and history from American University and a master’s degree in fine arts in playwriting from the University of California, Los Angeles. She’s written for the Washington Post, the Dallas Morning News, authored a book in 2009 and even wrote an episode of “Mama’s Family” back in 1989 entitled “Mama’s Layaway Plan” — the same year that she moved to Alexandria. The mayorship is her only job, she drives a 20-year-old Acura and makes roughly $30,000 a year.

“It’s extremely difficult,” she said. “If something goes wrong with the car, or I have to dip into some savings, then that’s what I have to do, but I really lead a frugal life, because that’s what’s required when you’re the mayor, and the royalties from ‘Mama’s Family’ might only pay for my month for my Virginia Dominion Power bill.”

At Jefferson-Houston, Silberberg, in a buttoned up dark pant suit, white blouse and a simple string of white pearls, took off her green wool coat and shook hands and talked for over 20 minutes before the arrival of Kaine, U.S. Sen. Mark Warner (D) and former Virginia Gov. Terry McAuliffe. But the clock was running, and as Walker ran out to get the car, Silberberg made her goodbyes and left the event before the arrival of the dignitaries.

Back in the car, Silberberg said that being the mayor is a full-time job, but that doesn’t mean she wants to see a change in the city charter.

“The truth is that it is more than full time to be the mayor,” she said. “It just is. For every event that I go to, for every issue that I tackle, there are many more issues — we’re tackling so much every day — that’s what it requires — full-on attention, and I’m very proud of my track record of leadership in these two years. During that time we have tackled many issues that have been festering for decades, and I’m committed to doing even more and that’s why I’m running for reelection.”

Silberberg’s political career began when she was elected Alexandria’s vice mayor in 2012, winning the most council votes and beating out longtime councilwoman and former Vice Mayor Del Pepper. Up to that point, she’d interned for Democratic Massachusetts Sen. Ted Kennedy, worked for Texas Sen. Lloyd M. Bentsen (D), volunteered as a speechwriter at the 1992 Democratic National Convention and for Vice President Al Gore in 1994 and for the Democratic National Committee’s press office during the presidential candidacy of Massachusetts Sen. John Kerry in 2004. Additionally, she was appointed to the Alexandria Economic Opportunities Commission in 2004, was named commission chair in 2010 — a position on which she served until her 2012 election. She also wrote opinion columns in the Washington Post about Alexandria’s Martin Luther King, Jr. holiday in 2008 and the city’s waterfront in 2011. She is the former president of the board of the Georgetown Senior Center, and, in 2014, was the treasurer for the Metropolitan Washington Council of Governments.

At Hammond Middle School, Walker parked while Silberberg walked into the building and put on a blue Alexandria Little League shirt over her white blouse, grabbed a baseball mitt and warmed up by playing catch with 11-year-old R.J. Davis. After throwing Davis the first pitch minutes later, she took the microphone and spoke to an audience of more than 500 youths, parents, volunteers and city officials.

“Opening day is one of the best days in my book.”

Before leaving, Silberberg signed the baseball for Davis, who sat down and showed it to his friends. Back in the car, Silberberg said that she was an athletic child, and preferred tennis — a one-on-one sport that could be seen as an apt analogy for making it in local politics.

“In tennis you are playing against someone across the net, but I was also playing as part of a team, but If I didn’t do my part, the team would not do well,” she said.

Silberberg won the Democratic primary for mayor in 2015 by 312 votes in a three-way race between herself and two former mayors, Kerry Donley and then-incumbent Bill Euille, the city’s first African American mayor who had run unopposed in a primary since his 2003 election. Silberberg then defeated Euille in November by over 7,000 votes when he ran as a write-in candidate. Her critics will say that she is extremely effective in building relationships in the community, but not on the dais — leading to a number of 6-1 votes on which she’s in the minority. And now, despite being the incumbent, it seems that Silberberg is the underdog once again, having raised $70,763 for her mayoral reelection campaign with $40,939 in on-hand cash as of March 31. Most of her campaign funds have been spent on campaign ads in newspapers, yard signs, mailers and other campaign literature. Wilson, on the other hand, has raised $97,663, has $63,082 cash on-hand and has spent his money on campaign consultants, campaign literature and advertisements in newspapers and online.

Former Alexandria City School Board Member Eileen Cassidy Rivera is Silberberg’s campaign chair, and said that hundreds of the all-volunteer “Allison Brigade” are door knocking and campaigning for SIlberberg.

“We’re not using any of the donations we’ve received to pay anyone. We’re using the funds to pay for messaging, through mailers, advertisements, things like that. We’re in great shape,” she said the following night at the Alexandria Democratic Committee Straw Poll (an unofficial poll in which Silberberg lost to Wilson). “We have every single precinct covered more than you can imagine.”

Silberberg next arrived at the Basilica of St. Mary for the funeral of Pat Troy, an Alexandria legend and founder of the city’s St. Patrick’s Day Parade. The event was attended by hundreds. Immediately afterward, Silberberg was back in Walker’s Prius on the way to the Mark Center Hilton at the other end of the city to speak at a religious event. The lightly attended event was for “My Gathering Place International,” and Silberberg, who is Jewish and spoke without notes, was greeted warmly by the event host, pastor/evangelist LeaAnn Pendergrass.

“We can be a friend to someone in need, advise someone who is elderly and suffering, we can be a friend to someone who is in need of just listening because they are in trouble, someone who needs a second chance because they’ve fallen short — because any of us have made a mistake or have fallen on hard times,” she said. “In 2008-09 millions of Americans lost jobs, their health care coverage, their home — people who did everything right and a lot of us in the country serve as a bridge over troubled waters for many.”

Next, it was back to Walker’s car and back to St. Mary’s for Pat Troy’s funeral reception. Silberberg also spoke at that event, danced with Troy’s cousin, Joseph Troy, and spent over a half hour saying goodbye before jumping back into the car to door knock in the city’s Beverley Hills neighborhood. During the ride, she was careful to not criticize Wilson, but said that he led the effort behind last year’s historic 5.7 cent tax hike, altered her ethics reform pledge for elected and city officials and uses too much time on the dais on social media.

“I do think that we all need to be focused on the city’s business during the course of public meetings, and that’s what the people of our city deserve. I’m not posting on social media during the meetings,” she said. “The election is not really about me. It’s about all of us and moving our city forward together to make it an even better city. And our city is doing great. We are the number one travel destination in the country, the most romantic, the most well read … During my two years as mayor, we have been moving at lightning speed forward on many fronts, regarding CSO [the city’s massive combined sewer system project], regarding schools, repaving roads and I put forward an ethics initiative that I think was bold, and I’m proud of it, but, of course, what passed was watered down, and the vice mayor led the effort to water it down.”

After picking up a campaign aide, Walker dropped off his passengers and parked once again — this time on a residential street.

“Are you the mayor? I want to meet you. We just moved here a month ago. I’m Bill,” he said and shook her hand. “I just signed up to register my car for personal property taxes … I’ll be happy to do what I can for your campaign.”

Silberberg door knocked for over an hour and then went home. She didn’t make it to the Alexandria Symphony Orchestra’s performance. She said that on average she works 16-18 hour days, and hasn’t thought about what she would do if she lost reelection.

“I believe strongly that we must continue to pursue thoughtful, appropriate development that fits in and is to scale and I will always fight to protect our neighborhoods and quality of life. Of course, I believe that we must grow our commercial tax base, but do so in a balanced way with a staunch commitment to economic sustainability with fiscal responsibility,” she said. “There are differences between us [she and WIlson], of course, and there will be debates where those will come out.”

The first debate is on Wednesday, May 2 at the Mount Vernon Community School Auditorium from 7 p.m. to 8:30 p.m.