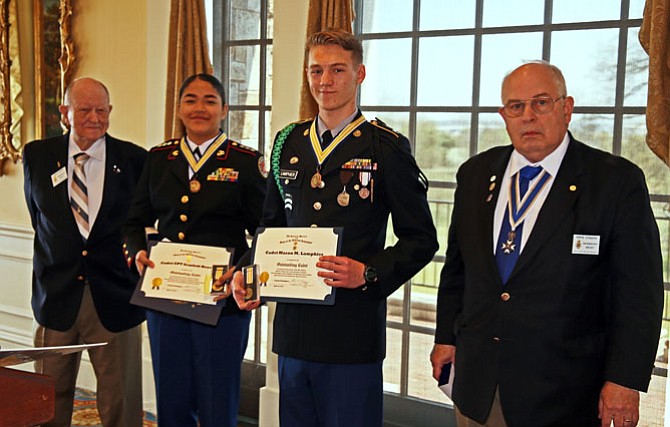 The George Washington Chapter of the Sons of the American Revolution recognized two local JROTC cadets and two Alexandria Sheriff’s Deputies at its April 14 meeting at the Belle Haven Country Club.

Cadet Captain Scarlett Reyes of Mount Vernon High School received the chapter Enhanced JROTC Medallion, a Bronze Medal and a check for $300 for her entry in the chapter’s annual outstanding cadet competition. In February, she received a medallion and a check for $1,000 from the Virginia Society of the Sons of the American Revolution as its winner in the state competition.

Cadet Sergeant First Class Mason Lamphier of Lake Braddock Secondary School received an Enhanced JROTC Medallion, a Bronze Medal and a check for $200 for his entry in the chapter’s competition.

Sergeant Valarie Wright and Deputy Charlie Wright were awarded the SAR Heroism Medal for their efforts in rescuing a stabbing victim from an angry mob at the peril of their own lives.

Guest speaker for the meeting was Curt Viebranz, past president of George Washington’s Mount Vernon Estate. Viebranz received the SAR Silver Good Citizenship Medal and the chapter’s Baldwin-Jones-Tabb medal in recognition of his support of the chapter and contributions to the presentation of American history during his tenure at the plantation. The awards were presented by Mike Elston, immediate past president of the Virginia Society of the SAR, and Ernest Coggins, president of the George Washington Chapter.