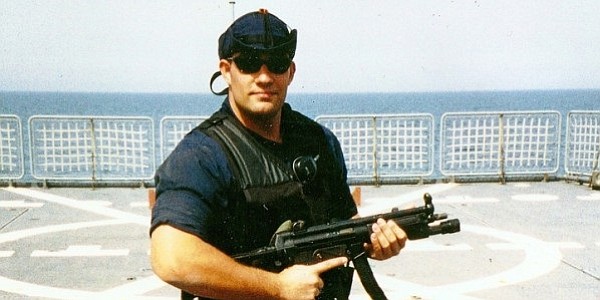 Led by Coast Guard Commandant Admiral Karl Schultz, far left, dignitaries and guests stand for the presentation of colors to open the commissioning ceremony of the USCGC Nathan Bruckenthal July 25 at the Alexandria Waterfront.

The crew of USCGC Nathan Bruckenthal mans the rails during the commissioning ceremony for the cutter in Alexandria July 25. Bruckenthal is the Coast Guard’s 28th Fast Response Cutter named after Coast Guard Petty Officer 3rd Class Nathan Bruckenthal, a 1997 Herndon High School graduate who was killed in action during Operation Iraqi Freedom in 2004.

“Petty Officer Bruckenthal defined service above self and we are here today to honor that legacy.” —Coast Guard Commandant Karl Schultz

“The name Nathan Bruckenthal is one that is recognized and revered throughout our service,” Schultz told the crowd. “Petty Officer Bruckenthal defined service above self and we are here today to honor that legacy.”

Among those in attendance at the ceremony were Bruckenthal’s sister Noabeth Bruckenthal, widow Patti Bruckenthal and daughter Harper, who was born during the deployment from which her father never returned.

Bruckenthal participated in track and field and the Naval Junior ROTC while attending Herndon HS. He was killed April 24, 2004, when a small boat near the Iraqi Khawr Al Amaya Oil Terminal that he and six others were attempting to board exploded in an attempted suicide bombing.

At the time of his death, Bruckenthal, who also attended Herndon Elementary and Herndon Middle schools, was deployed with the Coast Guard Patrol Forces Southwest Asia. He had joined the Coast Guard in January 1999 and been in his assignment since September 2002. This was his second tour of duty in Iraq, having previously been deployed there from February to May 2003 and returned in February of 2004.

The USCGC Nathan Bruckenthal’s new homeport will be Atlantic Beach, N.C. The crew voted to adopt as its motto “Bravery in Battle” in honor of Bruckenthal.

"He was always a hero in our mind before he made the ultimate sacrifice," said his father, Rick Bruckenthal. "The last story is the sad story, but also a great story because we don't know how many people's lives he and his crew saved that day."