Getting Somewhere with the Potomac Interceptor Rehab Project
Votes

Getting Somewhere with the Potomac Interceptor Rehab Project

Great Falls residents meet with a team from DC Water to spur progress on pipeline improvements. 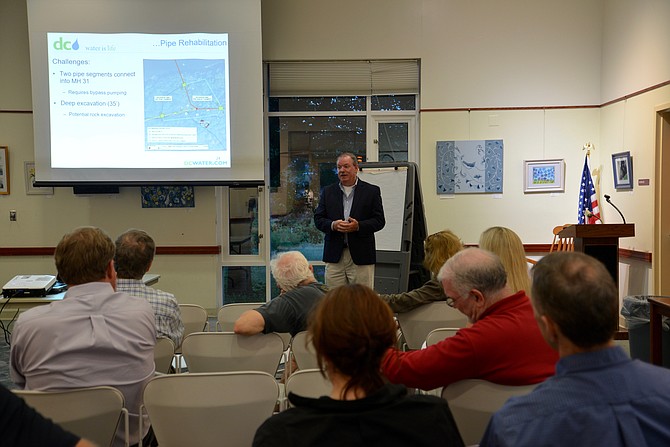 Robert Bell, Sewer Program Manager with DC Water, details the Potomac Interceptor pipeline system to interested residents at the Great Falls Library. The meeting is one in a long series of gatherings between the company and the community to discuss rehabilitation of the system. Photo by Andrea Worker.

Not everyone in Fairfax County is familiar with the Potomac Interceptor. A quick, non-scientific survey on the streets of Vienna and at the Wiehle-Reston Metro station yielded responses like “Potomac Interceptor? Something that catches ice flows on the Potomac?” “Is it military equipment named after our area for some reason?” and “No idea, what is it and is it important?”

Well, it’s not a military jet or an ice flow net, and it’s actually of vital importance to the entire region, since the Potomac Interceptor (PI) is a massive sewer system combining pipes and a tunnel that conveys on average 60 million gallons of sewage per day (MGD) starting from Dulles International Airport in Virginia to the Potomac Pumping Station in D.C. – a distance of almost 50 miles. In drier weather that flow can slow to 20-45 MGD. With significant rainfall, the peak observed flow has risen as high as 80 MGD in a system that can theoretically handle a capacity of 112 MGD.

In addition to the airport, the sewage system carries wastewater flow from Loudoun County, Montgomery County, the Town of Vienna, and Fairfax County.

Many residents of Great Falls are acquainted with the Potomac Interceptor, even though there is no sewer service in Great Falls. Some of them are more familiar with the Interceptor than they would like to be as portions of the pipe and tunnel sewerway, from manhole (MH) 31 to MH 30, run alongside their properties.

Quite a few of those residents attended a meeting on Aug. 15 at the Great Falls Library, where no less than nine District of Columbia Water and Sewer Authority (DC Water) team members were on hand to revisit the history and the logistics of the interceptor and to talk about its current status and future plans to maintain the health of the system.

DC Water may have felt compelled to bring such a large contingent to the meeting since the interceptor has been a topic of conversation in this area for more than a decade and the citizenry in attendance were well-informed on the subject, and understandably skeptical after so many years of being told that needed repairs to the over-50-year-old system were all but on the way. At a meeting between the DC Water crew and Great Falls residents as far back as 2005, the company representatives described a one-mile-long section of the system, running through Great Falls, as severely deteriorating due to corrosion by hydrogen sulphide and other debris building up in the pipes.

TO DATE, no repair work has been initiated.

There has been progress, but in the eyes of many, it has been slow to arrive. After complaints about overwhelming odors from communities near portions of the Potomac Interceptor, a study in the late 90s recommended the construction of odor abatement facilities to pump and treat gases in the system, rather than rely on intermittently-spaced vents in the system that allowed the gases to escape into the atmosphere.

It wasn’t until 2013 that DC Water cut the opening ribbon on some of these abatement facilities, and the project wasn’t completed until 2015 – and the Virginia sites were at the end of the completion line.

DC Water explains that some of the delay for the Virginia facilities was due to the fact that more permitting was required, more jurisdictions involved, and more homeowners affected with whom they had to coordinate their efforts.

Even while the odor abatement project was in progress, the water and sewer authority was proposing a solution for the degradation in the line, using a method called slip lining. Work on the interceptor rehabilitation was initially scheduled to begin following the completion of the odor control facilities.

“It’s 2018, what happened to the project?” more than one meeting attendee wanted to know.

Members of the DC Water team took turns answering residents’ questions and responding to their remarks, but it was Sewer Program Manager Robert Bell who spearheaded most of the presentation, and who answered the slip line inquiry.

“Constructability was a challenge,” said Bell. Further study determined that the slip line method wasn’t the answer and, in fact, would actually narrow the current diameters of the system, which range from 24 to 96 inches.

So, what now? the residents from Great Falls wanted to know. While most use their own septic systems and are not tied into the sewer system, the stability of the Potomac Interceptor in Great Falls is still of concern.

“Won’t a failure of the PI or serious leakage affect the groundwater in our neighborhoods?” asked one Great Falls resident. In Great Falls, water comes from individual wells.

Bell had assurances on that score.

A multi-sensor inspection of the PI was conducted in March of this year, using CCTV, sonar, laser and Pipe Penetrating Radar inspection equipment.

While corrosion, particularly near MH31 is still quite evident, the inspection found no structural deficiencies and no significant debris obstructing the line, nor is the tunnel portion, which makes up the majority of the interceptor, in any imminent danger of failure.

Bell went on to say that even in the case of a sewage overflow, residential areas would not be impacted because of the area’s topography. It took Bell a few repetitions to help all of the non-scientists in the room completely understand that the pressure being exerted on the system from the outside by bedrock and the water table above it would keep the flow from pushing outward to any catastrophic extent.

While Bell, nor his colleagues were able to provide the details, he did assure the audience that DC Water “has an emergency response plan for the PI to mitigate any impacts.”

Bell then offered some highlights of the new rehabilitation proposals, adding that the segment between MH31-MH30 is one DC Water’s top priorities.

The plan is “unique” he acknowledged, calling for the complete replacement of MH31 and rehabilitation of 133 ft. of pipe with corrosion resistant liner along with other extensive work.

“It would also mean having to construct a bypass pumping system while MH31 was taken out of operation.”

THE GOOD NEWS is that plans have already begun. Better news is that funding for the project has been approved, and Bell said that further geotechnical exploration would be performed along the tunnel before work begins in order to test the rock “quality and strength” to look for other potential problems and deal with them accordingly.

No timeline was presented at the meeting, but Bell and Emanuel Briggs, the Community Outreach Manager for DC Water stated that community outreach activities would continue, and information brought more promptly to residents as it becomes available.

Great Falls resident Eric Knudsen left the meeting hopeful. “This is the first time I felt that DC Water was actually communicating with the community,” he said. Knudsen is past president of the Great Falls Citizens Association and the current chairman of the group’s Land Use and Zoning Committee.

“They allowed participants to … ask questions they’ve been asking for years without answers. And they gave answers. If they continue this pattern for the rest of the process, communicate regularly … and stay on the prescribed schedule, they will have the cooperation of the community.”