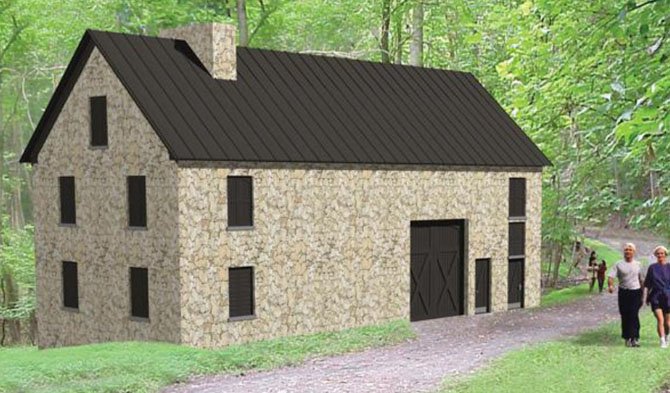 A rendering of the proposed odor abatement facility in Great Falls, which will serve the Potomac Interceptor sewage pipeline. Photo by Alex McVeigh.

Eastern Great Falls will be the site of a new odor abatement facility, part of the ongoing project from the D.C. Water and Sewer Authority

The pipeline, which was constructed in the early 1960s, conveys wastewater from Fairfax, Loudoun and Montgomery Counties by gravity to the Potomac Pump Station in Washington, D.C. It is approximately 50 miles long and conveys about 60 million gallons per day, with a maximum capacity of 127 million gallons per day.

The location of the new odor abatement facility to be constructed by the D.C. Water and Sewer Authority.

In 1991, due to odor complaints, a Potomac Interceptor Study recommended treatment of the hydrogen sulfide gas that came from the line, and six odor treatment locations were planned, one in Washington, D.C., three in Maryland and two in Virginia. One is planned for Loudoun County, the other for Great Falls. Barry Lucas of D.C. Water and Sewer said that maximum odor abatement won’t happen until all six are operational.

"Each facility is designed for its location, for example, site 1995 in Washington, D.C. is designed to look like a canal lockhouse, since it’s along the C and O Canal," Lucas said. "Back in 1999, we had an inspection video that showed a lot of the reinforcing of the pipe, which we’re typically not supposed to see. We can see concrete pipe, so we know we have issues and this project is the means by which we hope to begin to stop some of the corrosion."

The crews will access the site from Deepwoods Drive, Yarnick Road, River Park Lane. They will be placing speed humps, signs and will do some intersection improvements to Beach Mill Road and Deepwoods Drive.

"These are not high manpower jobs," said Allen McCullough of Ulliman Schutte Construction. "We are coming in to do some dome excavation and surface work, as well as some underground piping and pour some concrete structure foundation, then it will shift into some masonry structure. There will be fairly small crews, five or six people."

The facility will be approximately 57 feet by 25 feet, and is scheduled to begin construction this summer and conclude by Fall 2013. Working hours are expected to be from 7:30 a.m. to 4:30 p.m.

The facilities will use activated carbon to combat the odor of the sewer gas, which will be in the facilities. The process is expected to reduce ambient odor and sewer corrosion. The carbon will be replaced approximately every one to two years.

After the odor abatement facility is constructed, the D.C. Water and Sewer Authority will be using the same access points to work on rehabilitation of the pipeline, to repair to the pipeline itself, as 5,300 feet of liner for the pipe in Fairfax County will be replaced, designed to project the life of the pipeline by another 75-100 years.

The rehabilitation project will be done by separate company and crews.