‘Full Honors’ on Display in Pentagon 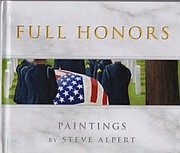 Steve Alpert’s book of paintings, “Full Honors,” tells the story of a Full Honors ceremony for First Lieutenant Louise Rand from Islip, N.Y., who served as a flight nurse in WWII with the U.S. Army’s 830th Medical Air Evacuation Squadron based in Karachi, Pakistan. Rand flew with the wounded from Karachi to Cairo.

“The seven paintings in ‘Full Honors’ depict a ceremony that so many in our nation rarely contemplate or have the privilege of attending, the burial of a veteran on sacred ground. From the Caissons transporting the casket in the cemetery to the mother’s acceptance of the folded flag on behalf of a grateful nation, each scene in this cherished ceremony demands that we take a collective pause. It’s that juxtaposition of verdant nature with the pageantry and color of the uniforms that gives the series of paintings a kind of hope in its gravitas. The faces of the service members in the paintings practically glow as if possessed by a sense of other-worldliness. The viewer comes away from this series with a sense of the enormity and the commitment demanded from those that serve. There is sadness in this final loss, but each painting also communicates the sense of mission, purpose and community.” —Lee Woodruff, Co-founder, Bob Woodruff Foundation, and bestselling author/journalist

Steve Alpert was a TV producer in New York City, a frenetic Big Apple journalist, when September 11th happened, and he realized he had to do something different with his life. Constant deadlines, meetings, and phone calls filled his day, but he was missing something. His wife suggested painting. He knew it was the right thing to do.

In November 2003, two Black Hawk helicopters collided over Northern Iraq: Alpert found his subject. Painting after painting of helicopters flowed out of his brush: his studio wall was full of them. Alpert found a way to reach out to veterans through painting: he teaches at a Fordham University workshop for veterans, helping them paint to manage PTSD (Post Traumatic Stress Disorder). He painted a triptych about a woman soldier saluting the flag: Joe BIden asked if he would loan it to the vice president’s residence for Christmas, and Alpert went from an relatively unknown painter to a man whose dedication to painting veterans and honoring their service has made him a familiar presence in Washington, D.C. circles.

Seven paintings in a series called “Full Honors” are on exhibit at the Pentagon since July 18. They will be at the Pentagon for a year. These full-size giclee prints of Alpert’s reflect his first visit to Arlington National Cemetery in 2014, where he met Chaplain (Captain) Matt Canada, U.S. Army. He was so moved by his tour of the cemetery he offered to make a painting of Canada officiating at a funeral ceremony. On May 27, 2015 he arrived to paint Canada’s final ceremony before leaving the Old Guard of the First Infantry Division.

The paintings, in the Pentagon’s third floor apex, Corridors 1 & 2, can be seen by those with access to the Pentagon — for now. Alpert said, “They are being exhibited with a series of large photographs from the exceptional organization TAPS, The Tragedy Assistance Program for Survivors, that provides such amazing services for families who have lost a family member while serving.”

Alpert hopes to display his paintings to the general public later this year in the Arlington area, in conjunction with organizations that benefit veterans. He is looking for a suitable exhibition space. For more information, Alpert has a book of paintings, “Full Honors,” and a website: www.stevealpertart.com.