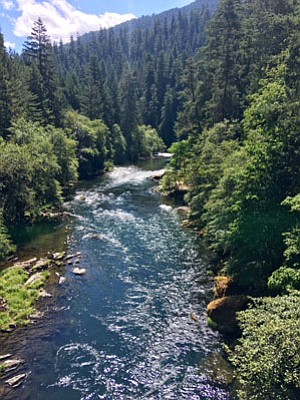 North Umpqua River near the Steamboat Inn: Photo taken from the bridge over the North Umpqua. Photo Contributed

Reston — Finally, it was August and time for our long-planned escape with family to scenic Oregon, a state we’d not visited. The impetus for the trip came from my two surviving younger sisters, one of whom made our reservations at Crater Lake National Park over a year ago. The spectacularly beautiful wonder of nature was to be the centerpiece of a 12-day trip which also included touring part of the Oregon Pacific coast and stays at Gold Beach, Ashland, Steamboat and Eugene.

Oregon had appeal not only because it was new to us, but also because it seemed likely to be a nice change from metro Washington in the dog days of August. However, sad to say it turned out Oregon was busy breaking high temperature records during our visit, including a couple of days of temps over 100 degrees F over most of the state. Worse, when we got up to Crater Lake, at 7,000 feet above sea level, the smoke was so dense from huge forest fires raging northeast, south and southwest of Crater Lake that the lake was not even visible. During our 3-day stay, we only saw the lake about a day and a half, even then with the acrid smell of smoke.

We made the best of it and were able to take a lovely ranger-guided bus tour around the 33-mile perimeter of the lake, which is one of the most beautiful bodies of water on the planet. We also took a couple of interesting hikes in the area.

From Crater Lake, we planned to go southwest to Ashland, another lovely forested area, famous for its outdoor Shakespeare Theatre. However, we got word that the situation was worse there. The smoke-filled air due to another fire raging nearby was rated “extremely hazardous” to human health and the air temperature was between 100 and 105. We decided unanimously to scratch Ashland from the itinerary and drive north to the charming, modern Steamboat Inn on the North Umpqua River for a couple of days.

That turned out to be a great decision: 75 miles, a 6,000-foot drop in elevation and being located on a beautiful trout and salmon river made all the difference. The air was cool and clear and the conifer forest amazing, ideal for a nice, long hike along the river. And, our cabin in those woods was nicely air-conditioned.

I should note other high points of what turned out overall to be wonderful because of those places and the quality time we had with family (my younger sisters and their husbands), whose company we greatly enjoy. We spent three days in a spectacular home overlooking Gold Beach at the mouth of the Rogue River. We took turns cooking, hiked along the magnificent Pacific beaches and took an exciting fast flat boat ride forty miles up the Rogue River. Besides the scenic river amidst gorgeous forested hillsides, we saw bald eagles, scores of ospreys, and many kinds of waterfowl. Our last stop was Eugene, Ore., home of the Oregon University Ducks and 52 cannabis outlets! A nice town of 165,000 (counting students, I think) offered some charming restaurants as well as duck land and more recreational cannabis than I could believe. We went into one fine emporium and were given a basic course on their inventory and suggestions for uses of their wide variety of product. Then, it was off our separate ways home- to Reston, Oakland, Calif. and McGaheysville, Va.

On return to our beloved Reston, we found it still in the throes of heated controversy over Fairfax County’s re-zoning plot, an unusually interesting Community Center preference poll with needed, talented new blood (Dick Stillson and April Tan), and Northern Virginia’s best farmers market still going strong. And, yes, the typical metro Washington August weather is an improvement over Oregon’s.