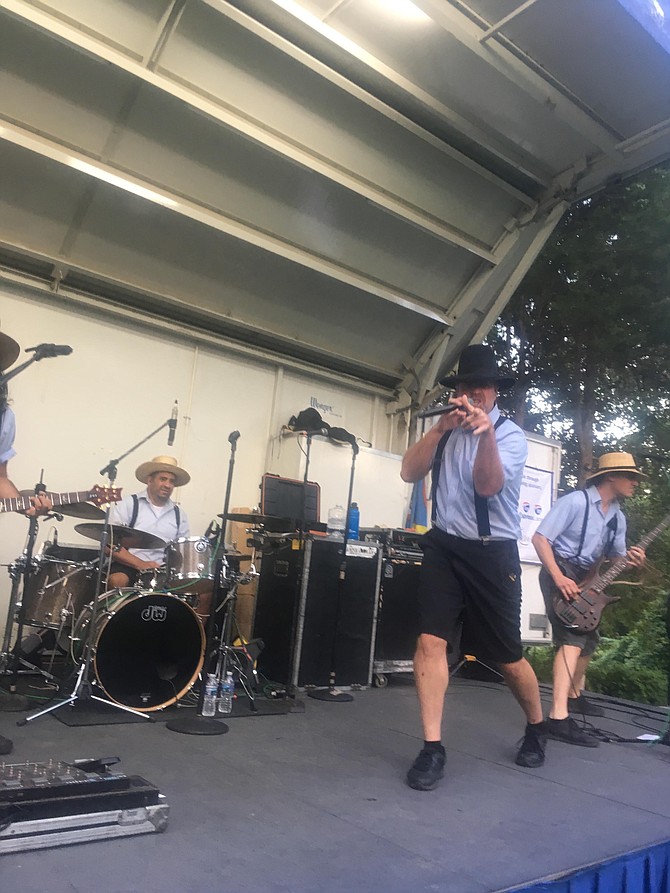 Rockin' with the Amish Outlaws at Nottoway Park. Photo by Mike Salmon.

Vienna — The suspenders, blue shirts, and straw hats screamed Amish, but the stage show and antics of The Amish Outlaws bore no resemblance to this religious 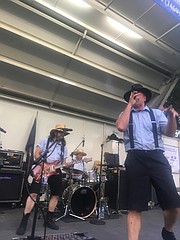 Amos Def takes over the stage for the Amish Outlaws.

group with roots in the Pennsylvania countryside. The crowd on the hillside at Nottoway Park was up and dancing in no time when the group took the stage on Thursday, Aug. 23 as part of the Summertime Concert Series put on by the Fairfax County Park Authority.

Hazekiah Yoder, one of the lead singers, immediately took to the audience, got down off the stage and went into the crowd, but then paused. “I swallowed a bug,” he joked, connecting with the crowd as he went into the first song that involved jumping before “Everybody Rock Your Body,” by the Backstreet Boys, and rolling into a set that included U2, a reggae hit, and “Honky Tonk Woman,” by the Rolling Stones.

“We try to find things people won’t hear every day,” said Yoder, commenting that “you won’t hear ‘Brown Eyed Girl,’ out of us.”

THE AMISH OUTLAWS are a cover band described as “men in full Amish garb releasing their pent-up energy with infectious joy,” read the description on the table. The Amish garb description isn’t entirely accurate, said Yoder. The religion is strict about clothes, cars and electricity. “You’re not going to catch any Amish in shorts,” he said.

Three of the band members are of Amish heritage, but left that life as teens. One is Yoder, and then there’s another singer Amos Def, and the bass player. “All three of us are from that culture,” Yoder said. Although they mention Amish in their band title, “we’re not making fun of our former culture in any way,” Yoder said. “We’re sort of goofy people anyway,” he added.

The Amish culture has European roots in Switzerland and Germany with the Mennonites, but formed in the late 17th century when Jakob Ammann broke 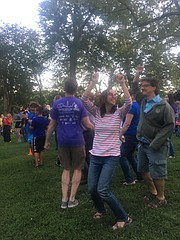 The crowd at Nottoway Park loved the music.

away and started his own religion. They settled in and around Lancaster, Pa., and Yoder has heard minimal negative comments to the group in reference to using Amish in their name. They aren’t a stereotypical wild rock band and the family-type crowd like in Vienna is their typical show.

“We all try to live a decent existence,” Yoder said.

Providence Supervisor Linda Q. Smyth (D) announced the group at the start of the show, which was the last of the summer concerts at that park. She praised the volunteers that staffed the event and then set the evening’s pace. “Let’s close out our season with a bang,” she said.

IN THE AUDIENCE was Ken Quincy, the vice chairman of the board at the Fairfax County Park Authority that also lives in Vienna. He was happy with the size of the crowd but knows these outside events are always a risk. “The weather is always a factor, zero rain outs this year,” he said. “A big variety of music on the schedule appeals to a wide variety,” he said.

They had Seldom Scene a few weeks before playing bluegrass, and the crowd was bigger, but this band got the crowd involved with dancing and interacting, which Quincy liked. Although both Smyth and Quincy were there, this was not always the case. “Linda Smyth and I sort of trade off MC’ing the act,” he said.