A Tale of Two Actions in Reston by Board of Supervisors 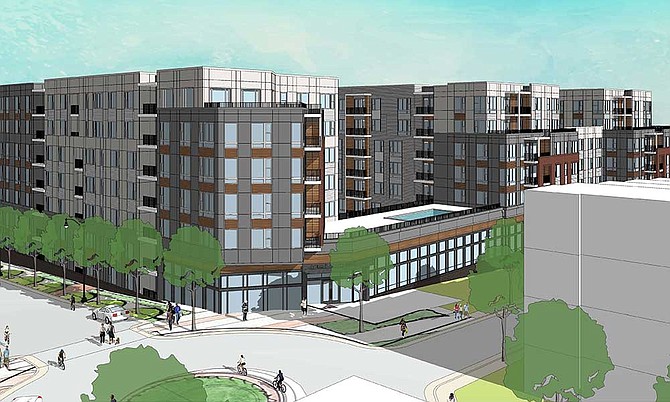 Aerial map of Woodfield Acquisitions’ two-story office building at 1941 Roland Clarke Place. On Nov. 20, the Fairfax County Board of Supervisors approved replacing it with a new 308-unit apartment building. Fairfax County Public Affairs termed the cul-de-sac on which the property is located the hub for new, lower-density residential development in Reston. The Reston Land Development Tracker January 2017 identified the site as a PRC zoned property.

The first release, dated Nov. 19, detailed that, following 17 months of public engagement, the Board of Supervisors is anticipated on Dec. 4 to authorize public hearings for early in 2019 on proposed zoning changes to increase the maximum allowed “population” density from 13 persons per acre to 15 in the Reston Planned Residential Community (PRC) District. The board also seeks to increase the limit of dwelling units in Reston's transit station areas planned for mixed-use development. Public Affairs stressed that the Dec. 4 meeting “…will not be an opportunity for public input."

"There are approximately 12.46 persons per acre currently in the Reston PRC District, based on the number of housing units built, under construction and approved to be built. County planners say the current 13-person cap may soon be exceeded, based on development proposals that are under review now." This reportedly is based on a formula for household size multiplied by the number of housing units divided by the 6,245 acres in the PRC zoning district for Reston. “A maximum, persons-per-acre density…is uncommon elsewhere and not applicable to any other zoning districts in the county," stated Public Affairs.

THE SECOND PROPOSED CHANGE mainly affects the Reston Town Center Transit Station Area. It would increase the limit of 50 dwelling units per acre to 70 in the transit station areas planned for mixed use development. “County planning officials say the Reston PRC zoning change is needed to put into action Reston’s Master Plan that accommodates the potential for future growth during the next 40 years, especially around its Silver Line Metrorail stations,” stated the release.

Public Affairs cited officials warned, "If the update isn’t ultimately adopted, Reston may lose its unique zoning designation that has shaped the community for the past 50 years…While some residents believe development in Reston would be halted if the zoning ordinance update isn’t passed, county planning officials say this is unlikely…Developers may simply seek to rezone properties to other districts to build the development envisioned in the master plan. This could result in a patchwork of different zoning districts across Reston, ending the cohesive zoning that shapes most of the area today."

On Nov. 20, 2018, the Fairfax County Board of Supervisors approved a “new, lower-density residential development in Reston,” in the PRC, the Woodfield Acquisitions Plan.

A second press release dated Nov. 20 described the action by the Board of Supervisors in its approval to replace a vacant two-story office building at 1941 Roland Clarke Place, located between the Dulles Toll Road and Sunrise Valley Drive, with a new seven-story, 308-unit apartment building. Public Affairs described the cul-de-sac where the project is as “the hub for new, lower-density residential development in Reston." The Reston Land Development Tracker January 2017 identified the land as a PRC zoned property.

"The apartment’s architecture will feature contemporary design with a rhythmic pattern of windows and balconies. The plans include a 409-space, eight-level parking garage behind the building, facing the Dulles Toll Road."

THE WOODFIELD’S BUILDING will be located between the Wiehle-Reston East and Reston Town Center Metro stations. It will join two other residential developments immediately to the south along Sunrise Valley Drive, Sekas Homes' 34 townhouse community, Sunrise Square on the east side of Roland Clarke Place and to the west of the cul-de-sac, Toll Brothers' 54 townhouses in its Valley and Park development. Woodfield has future proposed plans not yet approved by the Board of Supervisors to remake the adjacent, five-story office building at 1950 Roland Clarke Place.

Although Woodfield's two office buildings sit on a 6.5-acre site previously approved for more than a million square feet in new office and retail development, the Fairfax County Office of Public Affairs stated that, according to the development application, "Woodfield pursued residential development because the site wouldn’t support commercial uses due to its lack of visibility at the end of the cul-de-sac." The project did set aside a reported 31 percent of the site as open space, with .84-acre of parks providing outdoor tables, terraced seating, a water wall, splash pad and reflecting pool.