‘Not Always Laudable’ in Alexandria
Votes

‘Not Always Laudable’ in Alexandria

City government aims to identify, correct racial and other prejudices. 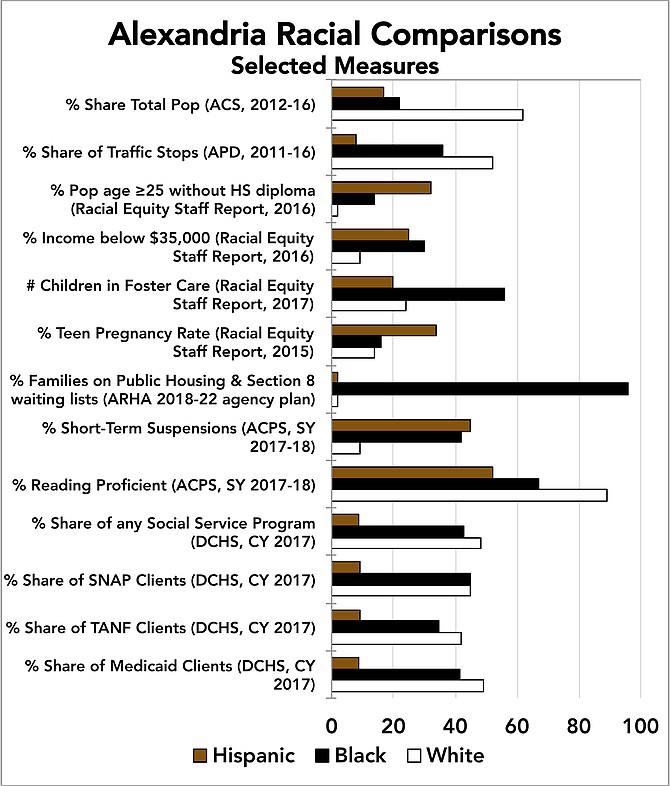 Because sources vary, comparisons within a given measure above are better than comparisons between measures. Many reporting agencies follow the Census Bureau’s convention, according to which “Hispanic” / “Latino” isn’t a race, but an ethnic category that can apply to any race. This doesn’t necessarily reflect colloquial convention, according to which “Hispanic” / “Latino” may often mean a de facto racial category of “brown,” distinct from “white” and “black.” Agencies also don’t necessarily apply the formal convention uniformly. Sometimes they report overlapping figures such that, e.g., a Hispanic white would count both as “white” and “Hispanic” (e.g., ACS total population, DCHS above). Other times, agencies differentiate Hispanics from non-Hispanic whites and blacks, in which case there’s no overlap (e.g, APD above). Sometimes public documents don’t clarify the convention used (e.g., ARHA above).

“Governments have historically created structural and institutional racism through public policy decisions. Alexandria has a very rich history, … but not always laudable,” said Jean Kelleher, the city government’s human rights director. “We need to focus as we move forward and develop the city economically, how we plan to built environment, and how we allocate resources to avoid disparate impacts on certain communities.”

To that end, an intergovernmental working group — including the public school and library systems, health department and juvenile justice agency — have begun reviewing the city’s policies and practices. They’ve focused mainly on racial inequity, with the expectation that improving racial disparities will tangentially improve the lots of other “marginalized groups” as well, said Kelleher.

Some 300 city employees have received training “on structural and institutional racism and privilege and implicit bias,” said City Manager Mark Jinks. The goal is to improve staff consideration of multiple perspectives and ripple effects regarding complex issues like land use and housing.

Councilman Tim Lovain appreciated shifting focus away from individual attitudes. Racism isn’t primarily “a matter of, if only all white people could purify their hearts, then everything would be fine,” he said. “The practice of racism in our country over the centuries has become institutionalized in ways that we don’t even recognize, whether it’s cultural bias or old boy networks in hiring. People of good hearts and good intentions still are implementing these practices, which have these racist outcomes. … The cycle of poverty, for example, might be the most insidious form of institutionalized racism ….”

Vice Mayor Justin Wilson said: “Where we put density, what types of housing we approved — I think we have to view those decisions through the lens of equity.”

Councilman John Chapman suggested that equity should be part of where the city locates services and facilities in connection with its long list of capital improvements. In a discussion with Mayor Allison Silberberg about the relative importance of city hall as a historic artifact, he said: “What needs to change is how the residents of the West End feel about their connectedness to the city government, how they feel that they can get services …. I don’t think any of us has not heard from West End residents about their feeling that they do not get served by this government because, in part, of where we are located, where our services are located.”

Other than Arlandria, the West End includes the city’s only census tracts with majority black or Hispanic populations.

Asked later if Silberberg thinks city hall’s location adequately ensures equitable access for all citizens to their city’s services, she said it does. She says she proactively supports locating certain services elsewhere in the city — for example, consolidating the department of community and human services in the West End. But she says city hall is Alexandria's historic seat of government and an important part of the city’s heritage. For these reasons, certain core government activities — City Council meetings, council offices, the city manager’s office — should remain located there. She says the city is small enough, there are sufficient modes of transportation and remote and electronic venues for citizen input, that city hall’s location doesn’t inhibit political participation. Moreover, “the vast majority of publicly subsidized housing is located in the eastern half of our city,” she said.