A Pattern of Gas Smell Reports in Alexandria?
Votes

A Pattern of Gas Smell Reports in Alexandria? 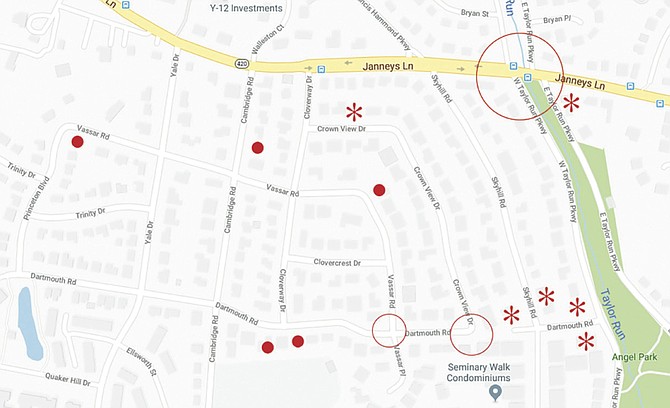 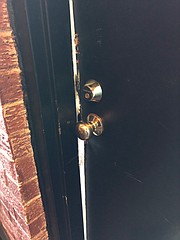 Gas odors at 202 Skyhill Drive were reported to the Clover-College Park Civic Association email exchange. Washington Gas discovered a leak and repaired it after the fire department broke down the door to gain admittance.

The smell of gas was first reported on the Clover-College Park Civic Association email exchange in late September when Lance Spencer contacted Washington Gas about a gas leak at 1108 Vassar Road. “Washington Gas responded quickly and replaced the box just inside our house at the connection.”

There were several more reports from neighbors in October but the numbers intensified on Nov. 10 when, Hillary Sentell at 202 Skyhill Road said, "I could smell gas in the hallway. After reporting it to Washington Gas, they came and determined the vacant apartment across from me did indeed have gas coming from it. The fire department had to be called to break the door down. They resolved the issue but I'm not sure what the issue was."

Since then there have been numerous continuing reports of gas smells, some investigated by Washington Gas technicians with no leak found and others with active leaks that were reportedly repaired. Sentell said, "I have been smelling gas at the corner of Dartmouth and Skyhill for over a month now. I have seen Washington Gas there multiple times."

Neighbors are concerned. Jill Edwards Hoffman's yard on Cambridge Street was dug up after a neighbor, who runs early in the morning, reported a smell of gas in front of the house. "There was a period when gas smells were just popping up around the neighborhood. It seems odd there were so many back to back." So Hoffman started keeping track through an active civic association email exchange.

On Nov. 16 the mail carrier knocked on the door at 2920 Dartmouth and reported the smell of gas. They called the gas company, but Washington Gas found nothing. Their daughter smelled gas again when she was at the house later in the day.

On Nov. 19 there were four reports, one across the street from 403 Cambridge, another reported an odor from several weeks ago at the corner of Janney's Lane and West Taylor Run, one on Crown View Drive early in the morning and one from the road drain at the corner of Skyhill and Dartmouth.

Both Councilman John Chapman, a Taylor Run resident, and Vice Mayor Justin Wilson contacted Washington Gas on behalf of the neighbors because they were concerned about some sort of a pattern.

"We felt like the gas company was treating it as a one off," Hoffman said.

Yon Lambert, director of Transportation and Environmental Services for the City of Alexandria, reported the city received a response to the neighbors' concerns on Nov. 19 from Washington Gas indicating they had investigated the leaks on Nov. 16 and 19 and had made repairs or were investigating the reports.

Bernie Tylor, manager of Washington Gas Media Relations, indicated to the Gazette Packet on Tuesday, Dec.11: "Over the past month there have been 12 leaks identified in Alexandria, in and around the Clover-College Park area. Eight were identified through a proactive leak survey that we conduct every three years to ensure reliability, safety, and protection of our system…Four leaks were identified by Washington Gas personnel responding to customer complaints. We responded immediately to make repairs where needed.

"First of all, as you know, providing safe and reliable service to our Washington Gas customers is our top priority. When leaks or damage to our system occur, we respond 24 hours a day/7 days a week to assess the situation. We make immediate repairs for any leak deemed potentially hazardous and schedule non- hazardous leaks for future repair.

"We also reviewed each street and looked at it for recent leaks. We do not see a pattern. However the dispatch team is aware the of the concern and will be monitoring it through the evening," the email stated.

Hoffman says Washington Gas is always very responsive but she is concerned that they only look at one address at a time, that no one is looking at the reports holistically. In addition, she says there seems to be a breakdown in the process. She explains in the case of her house, the fire department had come out in the morning and the gas company later in the day. But the gas company didn't know the fire department had already been there in the morning.

Celia Wexler, who lives in a condo at 53 Skyhill Road, reported that she and her husband go on long walks around the neighborhood and that on Dec. 5 they saw a large hole that Washington Gas had dug at the corner of W. Taylor Run and Dartmouth. "I don't know how long they had been working there. Today we saw them at 2020 Dartmouth. Since Dec. 1 they have been at the same intersection several times. Every day it seems there is a truck returning to a place they were." She said, "It's nuts. The last thing you want is for your house to explode."

Wexler questions whether Washington Gas couldn't easily send a notice to the neighborhood. "It wouldn't cost them a lot to let us know 'Here's where we've been, here's why we're here, here's when we think we will have completed.'" According to its Dec. 11 email to the Gazette Packet: "Washington Gas has recently implemented the use of a door hanger insert to notify residents in the neighborhoods when we are conducting leak repair service or perform any other maintenance work, and strive to distribute them each time we perform repair work."

In the meantime, the reports keep trickling in.