Cooking Up Holidays for Sailors
Votes

Cooking Up Holidays for Sailors 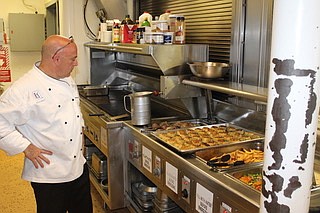 TPC Potomac’s Executive Chef David cooks for the sailors on the submarine USS Chicago, where his son Andrew is assigned.

Sailors benefit from a Christmas feast and a New Year’s Eve party.

“It takes a special person to be a sailor on a submarine,” said David Trevelino, whose 25-year-old son Andrew has served on the USS Chicago submarine in the Pacific for the past four years. “He has to be able to live without seeing the sun, hearing the sound of a barking dog or feeling the wind through his hair for a minimum of 30 days — and perhaps a maximum of six months. The food they are served is all frozen or canned, the quarters are tight, and 50 men living together for an extended period of time is definitely a challenge.”

As the executive chef at TPC Potomac for the past 17 years, Trevelino understands the difficulties of cooking for crowds and providing gourmet cuisine to all. However, when he received his son’s telephone call five years ago, requesting first that his parents come to Guam to visit him — and then secondly that his dad prepare lunch, Christmas dinner and also breakfast for the men assigned to Christmas duty on the sub — the challenge catapulted into the reality of logistics. How do we get clearance and approval from the Navy Command for this event? What’s the best way to locate quality food, prepare it and serve it on the sub? The entire operation had to be planned from afar without knowledge of the specifics — freezer capacity, fresh food supplies, available cooking, serving staff and more.

“One year we wanted fresh fish, so my son and I went fishing — and served mahi-mahi that literally went from sea to table,” said Trevelino. But he did not just provide the Christmas feast for 50 of the 150 assigned to the sub, he kept the party going by talking to officers on base and getting permission to throw a lively gourmet New Year’s Eve party for the entire crew and their families stationed at the Guam base — more than 250 people.

Each year, Trevelino and his wife Linda decided to continue the tradition, traveling to Guam three times since 2014. When the USS Chicago was relocated to Pearl Harbor last year for renovation, they tackled the dinner in a new location in Pearl Harbor with even more attendees. They are returning this year — and adding the crew from the USS Mississippi for the celebrations — making the total attending the New Year’s Eve party almost 400. They will hold this special event on the USS Missouri, best known as the site where Japan surrendered, ending World War II.

“I could never have provided these meals and parties without the generous fundraising by the members of TPC Potomac,” said Trevelino. “They have been behind me all the way — and have truly been amazing. The first year we raised $21,000 and each year, the amount has grown as we increased the size and scope of the party. This year it was more than $72,000 to support the brave men and women serving our country. The members make fabulous donations for the silent auction; TPC member Jose Andreas donates catered dinners, as do I. Jackson Family Wines has generously donated an all-expense paid weekend at the Greenbrier and other members have been equally generous — it couldn’t happen without their commitment year after year.” said Trevelino.

Andreas is also committed to helping disaster victims in the United States. He told Trevelino, “What I do is easy because I have teams ready to go to Puerto Rico, North Carolina, California — wherever they are needed to feed people who don’t have food because of the hurricanes, floods or fires. What you do is much more difficult — because it is just you — bringing food to our deserving troops.”

The sailors are so appreciative of the food, effort and dedication to make their holiday special. “Feasting on a gourmet dinner really improves their morale,” said Trevelino. “I made them a dinner of filet mignon, sea scallops, grilled asparagus, Mac and cheese and flourless chocolate cake. I kept it simple because I have to — purchasing the food, the preparation and serving it take an enormous amount of coordination and cooperation from local hotels, groceries and the base, as well as the Navy staff cooking team. My wife Linda has come every year and works right alongside of me — last year she peeled 120 pounds of shrimp. For the New Year’s Eve party, we go all out — prime rib, lobster tails, chicken masala, open bar. We hold that party on the base and it’s loved and appreciated by everyone who attends.”

Trevelino is proud because in addition to the meals, each sailor receives donated PGA Tour Shirts and hats from the AHEAD Hat Company. Operation Home Front also makes a donation. Spouses receive boxes of spices, herbs, oils and other hard-to-find cooking necessities and the captains receive engraved crystal vases.

“I never expected this to become what it has — an annual traditional dinner for the men who serve on submarines,” said Trevelino. “Now it’s not about visiting my son’s submarine and helping out the guys, it’s become a part of me and I want to keep serving up this traditional holiday meal to them. I plan to travel alone next year because Andrew’s tour will be finishing up and he will be assigned to Rhode Island and maybe spending a Christmas at home in Maryland. However, at TPC Potomac, we will again raise the money to provide the meals — and I will travel to serve them just as these sailors serve us every day.”