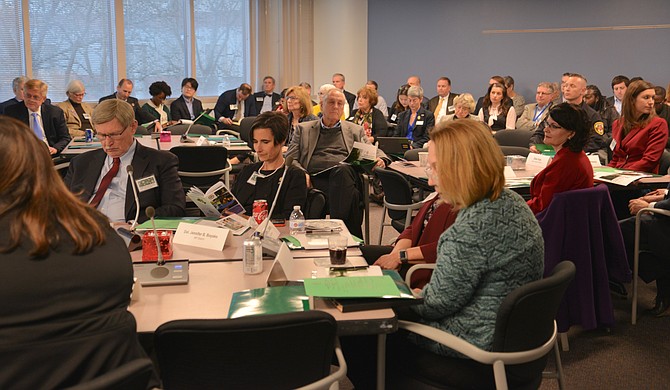 State delegates and senators joined the Fairfax County Board of Supervisors, other county staff, and representatives from a number of civic groups for a legislative work session prior to the start of the 2019 General Assembly in January. Photo by Andrea Worker. 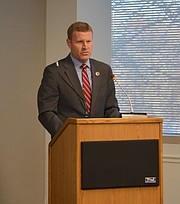 Lee District Supervisor Jeff McKay chairs the Board of Supervisors’ Legislative Committee. McKay gave an overview of the county’s legislative priorities to the Fairfax Delegation to the General Assembly, his colleagues, and a roomful of staff and interested parties at the Government Center on Dec. 11.

The 2019 session of the Commonwealth of Virginia’s General Assembly will begin at noon on Jan. 9. That’s still weeks away, but the county has been preparing its “ask list” even before the second special session adjourned on Aug. 30.

That preparation takes into account the achievements and the disappointments that resulted from the 2018 session along with analysis of the current political situation, changes in federal rules, regulations and laws that may affect the state, and a review of the county’s financial status and forecast of future needs before the budget is advertised in February 2019.

On Dec. 11, the Board of Supervisors invited the delegation representing Fairfax County to participate in a work session at the Government Center and to be formally presented with the county’s legislative program which was adopted on Dec. 4. Most of those delegates were in attendance, and those unable to attend sent representatives.

“Securing K-12 funding is a top priority,” said Board Chairman Sharon Bulova in her opening remarks. A joint position with the Fairfax County School Board on “Funding Core Services” for those grades was the very first item in the legislative program packet distributed to the delegation.

Bulova said some progress has been made, but the statistics continue to show an inequality when educational funds are apportioned, leaving local jurisdictions to fill in the gaps to maintain a quality system.

Only four other school system divisions in the state serve as many or more students receiving free or assisted school lunches. The county also has one of the largest shares of students with special education needs, or who are learning English as a second language to be properly educated, yet the county contends that the formulas for funding distribution contain structural features that leave “statewide funding far behind the inflation-adjusted FY 2009 level.” As of 2013, the Joint Legislative Audit and Review Commission ranked Virginia 23rd nationwide in total per-student spending, but 11th in the local share of this spending.”

THE COUNTY says this trend reflects “Virginia’s reliance on local effort and a growing imbalance in this partnership.”

Together, the Board of Supervisors and the School Board strongly support a number of elements for their K-12 funding request:

Supervisor Jeff McKay (D-Lee District) chairs the board’s Budget and Legislative Committees and spoke to the next issues on the county’s “top priorities list,” starting with “Transit.” He urged the delegation and the audience members to review the “Transportation Fact Sheet” included in the Legislative Program, and maybe even “dig deeper” for background information and a clear understanding of the current situation.

Of particular concern, and so noted in the “Priorities” of the Legislative Program, is the fact that legislation enacted in the 2018 General Assembly addresses the needs of the Washington Metropolitan Area Transit Authority (WMATA) in part by diverting funds from the Northern Virginia Transportation Authority (NVTA).

This diversion reduces funds for other critical transportation needs in Northern Virginia by $102 million per year. Projects that could be negatively affected or placed on hold for the foreseeable future include widening of several sections of Route 28 and the Soapstone Drive extension in Reston, among others. Such impacts will continue if the funding diversion continues.

McKay also made note of funding formulas which seem to “be a way to take money out of Northern Virginia and put it somewhere else.” The Department of Rail and Public Transportation’s policy change to allocate state funds based on project cost versus non-federal share could also impair the county’s heavily-subsidized Connector bus system — which receives no federal funds and is a key element in the overall transportation network. In FY 2019 the localities within Northern Virginia will be footing over 19 percent of the bill for transit capital purchases, while outside Northern Virginia, jurisdictions will only be called upon to fund less than 5 percent of these goods and services.

The county also asks the Fairfax Delegation to protect Northern Virginia’s fair share of statewide revenues for general maintenance. In FY 2019 the area is expected to only receive 6.9 percent of the state’s Good Repair funds, even though the county’s secondary roads, with only 39 percent rated as being in Fair or Better Condition, fall far below the Commonwealth’s 60 percent average, or its 65 percent target.

THE ECONOMIC SUCCESS of the county and Northern Virginia are crucial to the economic health of the Commonwealth as a whole, the supervisors and staff argue, and that health and continued growth are dependent on a modern, efficient, multimodal transportation system that is safe and in good repair.

Several pages of examples, statistics and concerns boil down to the county’s position that the State “should rebalance its resources and responsibilities.”

According to the report, State aid to localities has decreased by almost $1 billion between FY 2009 and FY 2016. The inclusion of a 5-year period during that time when localities were required to return funds in order to help balance the state’s budget basically created a “reverse concept of local aid to the Commonwealth” and equated to more than $20 million in state funding cuts to Fairfax County which was further affected by cuts to the K-12 funds and the implementation of the cap on funding education support positions.

Since 2016, the General Assembly has made progress in increasing the state’s commitment to education in the county, but the formulas and the allocation of resources for education and other services and activities in Northern Virginia continue to fall way short of the needs and out of balance with the rest of the Commonwealth’s shares and responsibilities.

Governance and Local Authority rounded out the county’s Top Priority list. There was no one in the room not aware that Fairfax County relies primarily on residential and property tax for its revenues. The county continues to call for diversification of tax revenue streams and the ability for local authorities to have more control over those methods of revenue generation.

McKay also expressed the board’s strong opposition to the “Proffer Bill” as enacted by the General Assembly in 2016 which “severely limits proffer authority” and has the effect of “distancing communities and neighborhoods from decisions about development in their area.”

“This needs to be fixed,” said McKay.

The Legislative Program Priorities were accompanied by numerous position statements on issues regarding the environment, health, public safety, general laws, human services and more that the board asks the Fairfax Delegation to consider and address in the upcoming session.

The entirety of the 2019 Fairfax County Legislative Program is available on the county’s website at www.fairfaxcounty.gov along with archived information from many of the board’s Legislative Committee meetings.