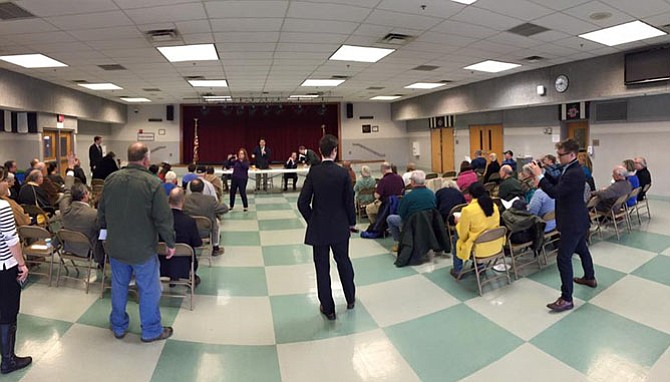 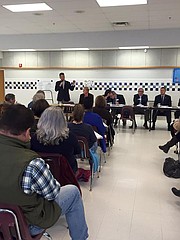 “I’m passionate, I love my job, and I’m pretty good at it,” said Osborne. “I have to say, I’ve been at Rose Hill for nine years. I love my school…I could make $12,000 a year more if I switched to Arlington, Alexandria or any of the surrounding counties.”

“Without that funding, you’re losing great teachers all the time,” said Osborne.

School Board Member Kaufax spoke to the Fairfax County schools budget in response. “We have a proposed teacher salary scale investment of $40 million for you,” said Kaufax, but identified partisan spending cuts for other education budget shortfalls.

Fairfax County education funding was a constant topic at the town hall at Hayfield Elementary School. Sen. Surovell pointed out that the Commonwealth of Virginia has increased funding to Fairfax County Public Schools by $208 million and 48 percent since 2010, but Fairfax County has only increased its funding by 15 percent.

One specific issue was the education funding formula of Local Composite Index, which measures a locality’s ability to pay for their own education and receive less state funds.

Education advocates at the Lee District town hall asked if a change was coming soon, which Surovell said was unlikely. “Although we all would like to see the formula change, the reality is that the formula has only ever changed pursuant to lawsuits,” he said. “I’ve been saying for four years: File a lawsuit, Fairfax County. What is happening is improper, it’s illegal.”

Surovell suggested a temporary solution to close the funding gap for Fairfax County’s shortfalls in the education budget. “In the short term, what we can do is Fairfax County can diversify its tax base by enacting a meals tax…There are people who come to this county, they spend money in this county and we’re not taxing them. And we need to tax them.”

“It would generate $80 million and plug this entire shortfall tomorrow, and it would only cost you about an extra ten cents on your burger,” said Surovell.

Another common theme that advocates were passionate about was the issue of funding for mental health treatment. Legislators identified problems with state services being local and convenient enough for people with mental health issues, and some town hall attendees spoke to the efficacy of state-funded support groups.

Senator Surovell highlighted the recent experience of a Northern Virginia family whose family member was recently admitted for services, but sent to Petersburg. “We need to put more money into the mental health system so families can support their loved ones in treatment,” said Surovell.

Sen. Barker cited his involvement with the Deeds Commission, a four-year study on improving the treatment of mental health issues, and the need for more funding.

“There are some areas around, even here in Northern Virginia, where if you have a mental health issue, you don’t get service from a local community service board unless you go into crisis. That simply is not an answer to the problems,” said Barker. “That is inviting and creating problems.”

“We have what’s called Medicaid waivers, that help people to serve their family in their home and keep them out of institutions; everyone knows that’s the right way to go,” said Sickles. “We’re going to go away from certain stovepipe benefits for certain people and have a cafeteria approach to matching a direct service a person needs better to keep that person in the setting where they’re most independent.”

THE RECENT COAL ASH DUMPING at Possum Point was also a pointed issue for constituents and legislators. “This is part of a pattern,” said Surovell, who introduced a bill this year to mandate the clean disposal of coal by-products.

Del. Krizek joined the opposition to the dumping into the Potomac River and said, “There shouldn’t be any question if there’s a fine, there’s got to be a fine.”

“The money needs to stay local and needs to be used here to deal with the cleanup and the prevention for the future,” said Krizek.