Lorton Intersection Looked at for Change 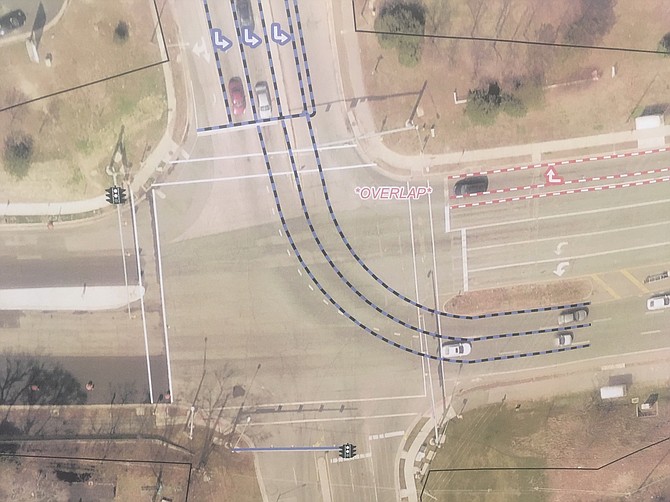 At the Lorton and Silverbrook Road intersection, it’s not surprising when a car gets in the thru-lane and cuts over to turn on Silverbook at the last

Lorton Road and Silverbrook Road has backups during rush hour.

minute. When the rush hour traffic backs up turning right on Lorton Road, some drivers do this illegally.

“That’s the road rage issue,” said Dale Johnson, a South County Federation member who attended the Lorton Road-Silverbrook Road Intersection Improvements meeting on Dec. 12. Fairfax County Department of Transportation held this meeting to highlight the four options on the table, and gather input. According to the Fairfax County Department of Transportation project description, “the study identifies intersection improvements that enhance the intersection operations and increase capacity, specifically through Silverbrook Road’s southbound left-turn movement and Lorton Road’s westbound right-turn movement. In addition, the goal of the study is to address any safety or operational deficiencies found through the existing conditions analysis, and address any other modes of transportation needs.”

The idea to look at this intersection was first brought up in 2012 when they looked at the traffic on Lorton Road. “This kind of opened the door for this study,” said Ryan Knight, a FCDOT traffic engineer. The options include adding a turn lane from Lorton Road to Silverbrook Road; overlapping the signal pattern; adding a median island with a freeflow lane; and implementing dual right turn lanes. These options had a definite traffic engineering ring to them and even after Knight’s explanation, they were complicated.

The “no build,” option was also part of the study. “If we don’t do anything, the intersection will be an LOS F,” said Knight. LOS is Level of Service and F is the lowest grade.

Although the increased traffic through this intersection can’t be attributed to a new development or apartment complex, one of the attendees said it was due to the cut through traffic using Lorton Road to Route 123 going to Prince William County. Knight was looking at the bigger picture. “We’re trying to fix a problem that’s a network problem,” he said.

The intersection is in the Mount Vernon District under Supervisor Dan Storck. “For this community around here, it is a big deal,” he said. “As it’s gotten busier, the turn lanes have gotten more crowded,” he said.

“This is all before Amazon,” one audience member joked.

The study will be done in 2019, but beyond that, there is no funding or start date in place. “We don’t have that at this point,” said Knight.