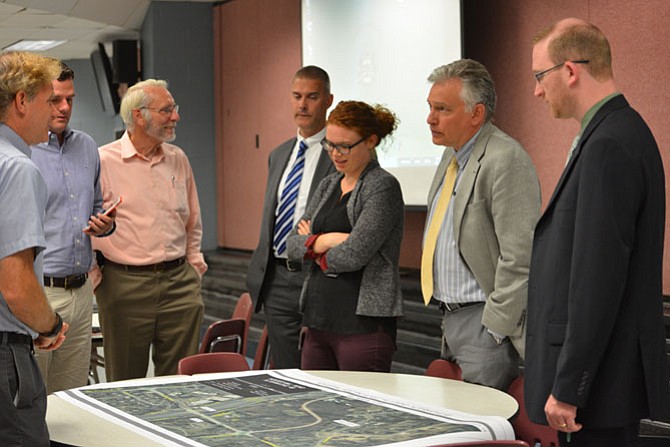 Kristin Calkins with Fairfax County Department of Transportation (FCDOT) and other officials from the department review some of the maps and talk about the proposed improvements to Hunter Mill Road with members of the community at their latest informational outreach meeting. Photo by Andrea Worker. 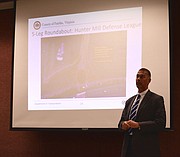 Although Kristin Calkins was the facilitator of the meeting as the project manager, Fairfax County Dept. of Transportation director Tom Biesiadny was also on hand to answer any questions and listen to public feedback. 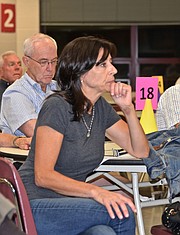 Lisa Mulville lives along Hunter Mill Road. Mulville asked a number of questions that county officials applauded, but also expressed concern about replacing the current one-lane bridge over Colvin Run with a two-lane structure. “This is a country road and shouldn’t be a freeway for people to get to and from work,” she said.

On Sept. 15, the Fairfax County Department of Transportation (FCDOT) held Community Meeting #5 to bring the public up to date and continue soliciting feedback on its studies to improve traffic flow along Hunter Mill Road, primarily north of Route 267. The kick-off meeting for the study took place back in December of 2014, with the mission to address the increasing congestion on the road, particularly from its access to the Dulles Toll Road, intersections with Sunrise Valley Drive and Sunset Hills Road, and Crowell Rd. and at the one-lane Colvin Run Bridge.

Acknowledging that drivers already experience peak-time traffic headaches on Hunter Mill, project manager Kristin Calkins provided projections for 2030 and 2050 increases in traffic that would basically mean “unacceptable levels of service” along the route in the years to come. The study was designed to develop alternatives to mitigate both existing and future conditions, while “maintaining the character of Hunter Mill Road,” which today is a two-lane country road that meanders past residential clusters, fields and woodland.

FCDOT conducted extensive studies during the first half of 2015 and presented some of their findings and several suggested corrective alternatives at a number of public forums during that time. At the request of the community, in July of 2015, the agency chose to defer the study to await the updated capacity analysis methodologies for roundabouts due to be adopted by the Transportation Research Board in January of 2016. Those results became available and were presented at a public meeting in June, with an expanded scope for the study. FCDOT is ready to re-start the project with the community’s involvement.

CALKINS REVIEWED the previous proposed Alternatives for the audience of about forty interested persons, then discussed a number of new alternatives that featured roundabouts or signals at the critical intersections, as well as Alternatives that employed a combination of both features.

“There are problems that arise when we look at methods that mix-and-match signals and roundabouts,” Calkins noted. The studies to date seem to indicate that the use of one method or the other would offer the best outcome, although there are challenges with roundabouts at the Toll Road intersection, regardless of which Alternative and roundabout shape is devised.

One major option for consideration in any Hunter Mill improvement plan includes the proposed re-routing of Sunset Hills Road, moving the road north to join Hunter Mill at Crowell Road and to block off their current intersection which is “just too close to the Dulles Toll Road entrance and entry ramps” on the north side of the highway. At these lights, “there just isn’t enough room for cars trying to turn onto Sunset Hills” or to await passage through on Hunter Mill in either direction, causing frequent backups and blocked intersections, no matter what time of day.

The public seemed willing to engage in a thoughtful discussion regarding all of the alternatives currently on the drawing board. Some residents who live on or near Hunter Mill did express concern about the suggested rebuilding of the bridge over Colvin Run, worried that not only would changes to the bridge make unwelcomed changes to the character of road, but that widening the bridge would also encourage considerably more traffic to use Hunter Mill as their access to the Toll Road.

Calkins and her FCDOT colleagues, including director Tom Biesiadny, acknowledged their concerns, but deferred to Virginia Department of Transportation District and Bridge Engineer Gary Runco as the expert on bridge-related matters.

Runco’s crew had just recently completed an inspection of the Colvin Run bridge on Hunter Mill and he had photos to show the audience what had been their findings.

According to Runco, pointing to repairs that have already been made and the deterioration still going on, “we’re just putting band aids on this bridge” and something would have to be done eventually. Under current regulations, Runco says he is “obliged” to study replacing the one-lane bridge with a two-lane structure. The bridge now carries approximately 8,000 vehicles per day, putting it in the category that requires considering a wider replacement. The bridge is on a list for major repair or replacement state funding – but not until the 2019-2022 cycle.

THE MEETING concluded with Calkins promising that the County would consider all of the feedback provided and continue to assess the options. The next meeting was tentatively scheduled for Nov. 17, location to be announced, at which time FCDOT hopes to present a Preferred Alternative and final recommendations for public consideration. Calkins urged citizens to stay informed via their website, www.fairfaxcounty.gov and select the Department of Transportation section.

Even though funding has not been secured for any changes to Hunter Mill Road or the bridge, the scope and magnitude of any such changes has FCDOT preparing now for the green light.