Panhandling at the Traffic Signals is Picking Up in Area
Votes

Panhandling at the Traffic Signals is Picking Up in Area

Officials looking for alternatives to handing out spare change. 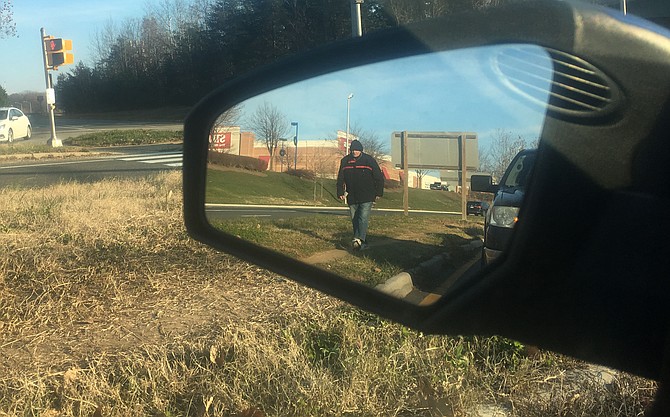 In the rearview mirror, a common sight at traffic signals in Springfield.

They’re at the traffic light, they’re veterans, they’re religious, they’re out of work, disabled, hungry and homeless, with the look, signs and

At a traffic signal in Springfield, panhandling occurs daily.

sometimes a cup for the spare change. This year, in particular, the panhandling seems to have picked up in the Springfield area. During the holiday season, drivers are particularly generous but giving out spare change is a questionable fix.

Springfield Supervisor Pat Herrity has worked on this issue, and came up with an alternate plan last year, and mentioned it in Herrity Report internal newsletter.

“There has been a noticeable uptick in panhandling in our community, much of it due to the generosity of our residents,” he wrote. “The Board recently approved my motion to look at an innovative program out of Albuquerque, N.M. - ‘There Is a Better Way,’ using a jobs first approach to address some of this complex issue,” Herrity said.

Albuquerque’s Mayor Richard J. Berry launched their program in May 2015, to give panhandlers a chance at a change in their lives and a way to provide caring members of our community with a better way to donate their money, according to the city.

Albuquerque uses a custom van to circulate throughout the city and offer panhandlers a job for the day, working in the city’s Solid Waste Department, to do work such as landscape beautification in designated areas to earn a day’s pay. This is currently being used in the City of Fairfax, Herrity said, and the county government is considering adopting it as well.

THE CITY OF FAIRFAX recently launched their program, which they call the “Day Work Program,” that addresses both homelessness and an individual’s financial viability and dignity, the city information stated. “This offers a great opportunity for folks that need assistance,” said city

“There has been a noticeable uptick in panhandling in our community, much of it due to the generosity of our residents.”

Although handing out money to people on the street could be risky, panhandling is not against the law, said Sergeant Aaron Pfeiff at the Fairfax County Police Department. As long as panhandlers are not impeding traffic, panhandling at traffic lights is perfectly legal. Popular intersections in the Springfield area include the Franconia Road-Loisdale Road intersection, Frontier Drive near the Metro station and the Rolling Road-Old Keene Mill Road intersection.

On Nov. 30. 2017, Fairfax County released “What You Need to Know About Panhandling in Fairfax County,” a webpage put together with input from several county agencies, including FCPD and the Office to Prevent and End Homelessness.

One suggestion from the report: “We encourage you to not give money to panhandlers,” it stated. This encourages more panhandling, and the county wants the panhandlers to take other routes to getting food, shelter and the necessities of life around here. The counties social service program is a place to start.

SUPERVISOR Jeff McKay (D-Lee) agreed. He noted the past county investigations into the panhandlers, where they found it part of an organized group who were not like they seemed at all. “We have identified that many of these people are not homeless at all, they come in to the county and collect money from the generous people in our community,” he said. Instead of giving out money at the stoplights, “give money to our well-known charities in the area,” he recommended, and named a few like Koinonia in Franconia, ECHO in Springfield or the United Community Ministries who have offices throughout the county.