What’s in a Name in Alexandria?
Votes

What’s in a Name in Alexandria?

Naming of city’s Waterfront Park smells sweeter to some than to others. 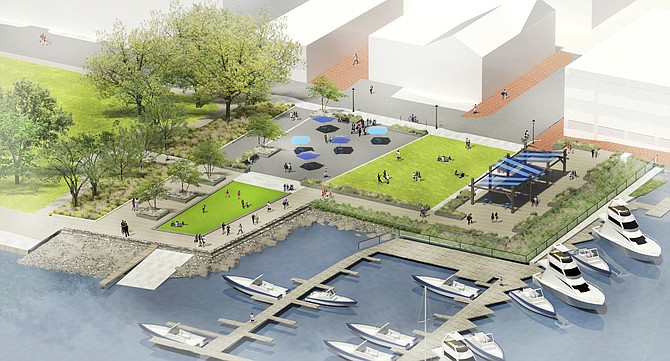 Design concept of what City Council has now officially named Waterfront Park. It was earlier conceived as two adjacent parks, Waterfront Park to the south, Fitzgerald Square to the north.

These are some of the 46 slaves owned by Colonel John Fitzgerald when he died in 1799, according to probate records compiled by Maddy McCoy of Slavery Inventory Database, LLC. They’re why City Council decided unanimously on Saturday, Dec. 15, to name the now-consolidated park at the foot of King Street “Waterfront Park,” and not after Fitzgerald, despite popular support for the latter.

The decision wraps up a controversial naming process, showcasing how people of different heritages feel included or excluded from historical prominence.

The city’s 2012 Waterfront Small Area Plan “contemplated” part of the area as “Fitzgerald Square,” according to Craig Fifer, city staff liaison to the park naming committee. Though never formalized, that name fell into common usage by city staff and the public, he said.

On the one hand, seeing Fitzgerald, an Irish immigrant, as a symbol of local Irish heritage, many Alexandrians urged that the park retain his namesake.

“Fitzgerald’s loyalty and leadership were key in establishing our nation,” said Kimberley Moore on behalf of the Ballyshaners, a local nonprofit that organizes Irish heritage events, in a letter. She cites Fitzgerald’s accomplishments as aide-to-camp to George Washington during the Revolutionary War, businessman, mayor, and founder of the city’s first Catholic parish, now the Basilica of Saint Mary in Old Town.

When the park later received the interim name “King Street Park” instead, the Ancient Order of Hibernians, an Irish Catholic fraternal organization, wrote to council in indignation.

“Instead of celebrating Alexandria’s deep Irish and patriotic past,” invoking the king “recalls the British oppression of the Irish, Alexandria, and the American Colonies,” said national Hibernian leaders in a July resolution. The order “condemn[s] in the strongest terms this outrage against our Irish history and heritage and insult of all Irish-Americans.”

Of 865 Alexandria residents responding to a city survey, 50 percent preferred naming the park after Fitzgerald, compared to 13 percent for Waterfront Park and 36 percent for something else. Under the third category, other naming alternatives included variations of former mayor Kerry Donley; the late Pat Troy, a local Irish mainstay; King Street; Old Town; and Parky McParkface, a riff on a popular online movement, ultimately nixed, to name a British research vessel Boaty McBoatface.

On the other hand, “Fitzgerald had one of the largest slave holdings in Alexandria history,” according to McCoy, based on tax records. Fitzgerald’s human holdings included mostly blacks, but some whites as well.

Councilwoman Redella “Del” Pepper said she couldn’t overlook this fact, though she acknowledged that Fitzgerald “was a distinguished man.”

“It really hit hard … to think that human beings were sold, and sold for so little,” she said. “I recognize that we have streets and other facilities that have the name of George Washington or [Robert E.] Lee, and they owned slaves. But we can’t go backwards. We’re not going to go around the city and rename G.W. Middle School or streets or whatever. We want to move forward.”

“Yes, times were different” for Fitzgerald, said Councilman Tim Lovain. “But this was not one or two slaves. His successful businesses were accomplished on the backs of enslaved human beings.”

“I think we should name this park for an African American or a Native American, or something else that gives us a better sense of who we are as an historic town,” said Andrew Macdonald, the only member of the public to speak at Saturday’s public hearing. “‘Waterfront Park’ does none of these things. It’s a simple, lackluster way to escape all controversy.”

Local African American leaders did consider putting forward an African American name for consideration. But they had difficulty finding one from the time period whose story was germane to the waterfront, said Councilman John Chapman.

“At the time, their perspective and story was not something that most folks, mainstream, cared about,” he said. “There’s still a lot of work to be done to have some of those stories told and brought to the forefront.”

“All of this is a historic reminder of how our country — not just this community, but the whole country — was a place where people were enslaved, where people were murdered, because they were just considered property,” said Mayor Allison Silberberg. “I’m reminded that Central Park in New York is just fine with a generic name,” she added.

“Maybe Waterfront Park doesn’t excite everybody, but at least it doesn’t offend everybody,” said Pepper.