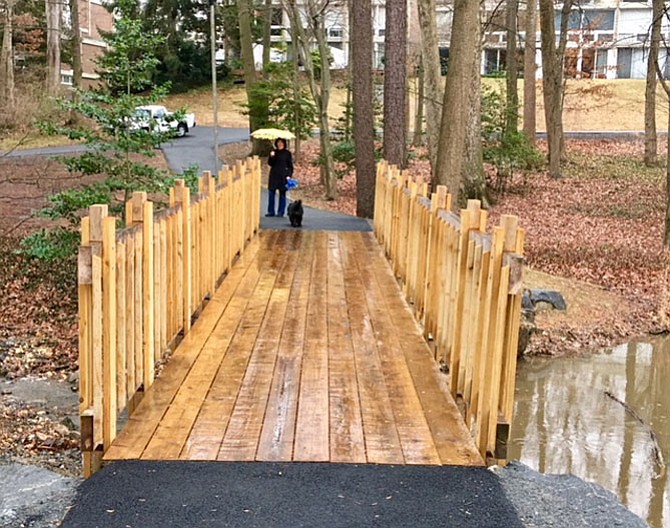 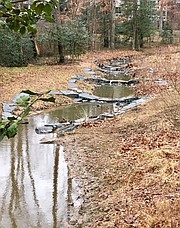 View of lower part of the completed restoration at Hickory Cluster.

In case you haven’t noticed, Reston stream restoration work is underway again. It is under way along several streams and gullies, this time in the Lake Anne area and north Reston after a several-year period of dormancy when its principal funding sources dried up — so to speak.

This major project, initiated in 2008, was intended to restore badly eroding streams which threaten our paths, roads, structures, and utilities as well as carrying untold tons of sedimentation into Reston lakes.

The project is a partnership of the Reston Association and a private firm, Wetland Studies and Solutions Inc (WSSI). The genius of this partnership is that through a special bank mechanism, WSSI is tapping funds deposited in the bank by land developers to compensate for wetlands they destroyed with new construction elsewhere. I understand that major chunks of funds came from deposits made to compensate for the construction of a runway at Dulles Airport, for example.

In the last three years, funds became available again and new work was approved by the various regulatory agencies, including our own DRB, and subcontracted by WSSI. Work began on several new reaches and has already been completed in four or five, among them Hickory Cluster (see photos).

Go to the Reston Association website (www.reston.org) for descriptions work sites and maps. You might want to check out the ones in your neighborhood. By name, they are Wiehle North, Wiehle South, Hickory, Baron Cameron, Lake Anne East, Lake Anne West, Buttermilk, Tall Oaks, and Vantage. Taken together, the reaches total about 17,000 linear feet, just over three miles.

I have found it interesting to watch the progress of stream restoration — from the painful digging, tearing and tree removal to the hauling in and laying of huge stones to form new streambanks and pools to slow the flow of runoff. New, improved bridges are also built, like the one in Hickory Cluster actually designed by a cluster resident. Native trees are planted in abundance along the banks. Then, one has to wait for the trees and grasses to grow, and lastly for the critters who inhabit the streams to return after the disruption.

To see lovely products of nature’s healing, check out the streams in Snakeden and the Glade in south Reston. These re-engineered streams will be a special Reston legacy for a very long time.

So, how much does this all this cost? The answer is a lot! But it costs you and I nothing in terms of our Reston Association assessments because of the special partnership described above.

RA tells me that WSSI uses an average cost figure of $1,000 per linear foot of its restoration model. Thus, the first 9.5 miles cost about $50.16 million (9.5 miles = 50,160 linear feet X $1,000 = $50,160,000). The completed or approved sites in north Reston to date will cost another $17,058,000. So, the total cost of Stream Restoration so far is about a cool $67,218,000! As far as I know, since the funds are external (from a bank where developers deposit funds to offset their destruction of wetlands elsewhere), RA neither monitors expenditures nor judges the reasonableness of WSSI costs.

While the project indeed represents a very large investment, I for one believe it to have tremendous long-term value to our community in controlling erosion and its damage, and to the beauty of our watersheds.