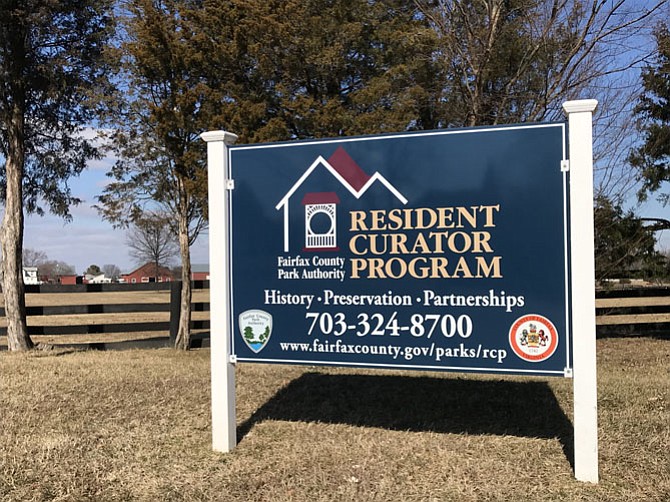 The person or organization selected as the Resident Curator for the Elmore Farmhouse will enter into a contractual agreement with Fairfax County and provide the rehabilitation and ongoing maintenance in exchange for a long-term lease. Photo by Mercia Hobson. 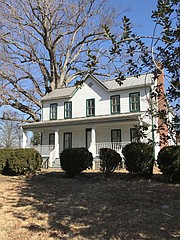 The historic Ellmore Farmhouse, owned by Fairfax County Park Authority and located within Frying Pan Park, will be getting its new Resident Curator later this year.

Historic buildings define a community's sense of character and identity. Whether by their unique architecture, age, or association with a significant event or period, the buildings bookmark a time and place. Without historic buildings, windows to the past are lost.

Fairfax County Park Authority is out to save another historic Fairfax County property, this time an 1891 structure that might well have otherwise deteriorated due to the elements, vandalism, or lack of funding. Through their Resident Curator Program, a talented individual or organization may soon be offered a long-term lease for no charge on a two-story, 3,300-square-foot structure nestled in a beautiful park-like setting in Herndon. All the selected tenant has to do is rehabilitate and maintain the structure as agreed.

The property is the historic Ellmore Farmhouse located in Frying Pan Farm Park at 2739 West Ox Road in Herndon. It is listed on the Fairfax County Inventory of Historic Sites and is a contributing structure within the Floris Historic District on the Virginia Landmarks Register.

IN FEBRUARY 2001, the Fairfax County Park Authority purchased the property as part of Frying Pan Farm Park. The farmhouse is significant due to its association with dairy farming and as the residence of Fairfax County Board of Supervisor member William H. Ellmore.

According to David Buchta, Heritage Conservation Branch Manager, Fairfax County Park Authority, the administrative review of selected applications filed in late 2016 is underway, and the public comment component of the review will be advertised. As for the timeframe of when the name of the curator is made public, Buchta said, "We hope to announce the new Resident Curator later this year."

As part of the application process, those interested, individuals and corporations, had to submit a detailed Treatment Plan of the historic farmhouse noting architectural, structural, mechanical, electrical and plumbing recommendations with total costs per item required. Buchta said the Treatment Plan for the house would involve rehabilitating the interior from mixed residential and office use to, depending upon the applicant, possibly either "a residence or if the applicant is commercial, the interior work may be adapted."

All work undertaken, Buchta said must be in accord with the Secretary of the Interior’s Standards for Rehabilitating Historic Structures. In addition, the County of Fairfax states: "The proposed use must be compatible with the historic nature of the resource, the general management plan for the park, and the mission of Resource Management Division."

Buchta said applicants are also being reviewed for their financial capabilities, their experience in construction and contracting, and historic preservation.

Buchta noted the exterior of the Ellmore Farmhouse is already restored to its Period of Significance, 1891 to 1954, the date when the property was likely no longer used by the owners as a dairy farm.

AFTER FINAL APPROVAL, the person or organization selected as the Resident Curator for the Ellmore Farmhouse will enter into a contractual agreement with Fairfax County and provide the rehabilitation and ongoing maintenance in exchange for the long-term occupation.

The selected Resident Curator will be the County's second one named under its countywide program. Two other Resident Curator Program sites are either under rehabilitation or applications have closed. They are the Lorton 1937 Stempson House, part of the program due to its significant association with the Occoquan Workhouse and Reformatory. Its ceremonial lease signing was Tuesday, Dec. 5, 2017. The other is the 1905 Turner Farmhouse in Great Falls, an example of the type of farm that predominated in the area during the early years of the twentieth century. Like the Ellmore Farmhouse, its applications are also under administrative review.

The Park Authority has identified four other sites. Two will have open houses early this spring, Buchta shared. "We will have two open houses for properties in the Lorton and Tysons areas." Ash Grove House in Vienna was home to Thomas Fairfax and one of the few standing 18th century Virginia homes built by the Fairfax family. The Hannah P. Clark/Enyeid House, a late 19th-century vernacular farmhouse is in Lorton.

For more information about the Resident Curator Program, visit fairfaxcounty.gov/parks/resident-curator-program or call 703-324-8586.