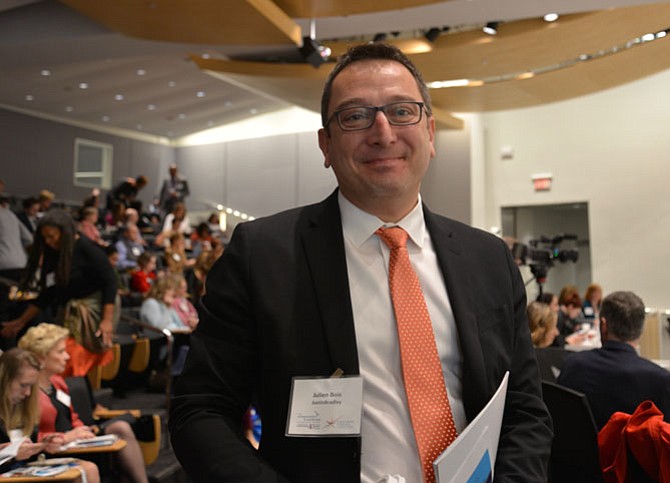 Julien Bois, of Springfield, partner with JustinBradley, had positive feedback for the event. Photo by Andrea Worker. 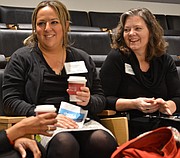 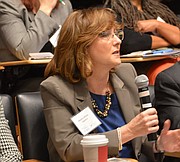 Martha Wilson, VP, C&I relationship manager for EagleBank, asks a question of a conference speaker. Wilson says the event “gave me an idea on how EagleBank might even further enhance their philanthropic corporate culture.”

The Community Foundation for Northern Virginia (CFNOVA), partnering with the Northern Virginia Chamber of Commerce, filled an auditorium on Feb. 15 at Valo Park in Tysons Corner with representatives from nonprofits, public office, academia and business to “unveil a new, dynamic data tool” and to encourage “a deep dive” into the challenges facing the region.

CFNOVA has been connecting donors to community needs throughout Northern Virginia since 1978. In conjunction with its 40th anniversary, the foundation commissioned a report from the Commonwealth Institute for Fiscal Analysis to provide detailed data about the region today, and the changes that have taken place to demographics, economy, education and community and civic life. The result of that research and reporting is the Opportunity Index for Northern Virginia.

The data, like the CFNOVA, encompasses the entire region: Arlington, Fairfax, Loudoun and Prince William counties and the cities of Alexandria, Fairfax, Falls Church, Manassas and Manassas Park, and examines 26 indicators of local social, economic, educational and civic wellbeing. The online report can filter its information by race, ethnicity, age, nativity and jurisdiction, and by date range. According to leadership at the CFNOVA, the Index serves as something of a “report card” for the region, highlighting where progress toward opportunity for all Northern Virginians has been made, and where it would be fair to grade the current state of affairs a “Needs Improvement,” and in some cases disturbingly close to failure.

Kevin DeSanto, chairman of the CFNOVA board of directors commented in his opening remarks that the Index “tells big, important stories about our region.” The conference focused on only two of the most critical — workforce development challenges and opportunities, and the region’s growing income inequality — but before the speakers and the panel discussions began, Michael Cassidy, president and CEO of the Commonwealth Institute for Fiscal Analysis introduced the Index and highlighted several of the findings to “set the stage and provide the background.”

FORTY-SEVEN PERCENT of youngsters in Northern Virginia are living with at least one foreign-born parent/guardian — a percentage that is significantly higher than the rest of the state or even of the nation. “That means the region’s future depends in part on the ability of the children of immigrants to flourish.”

The research indicates that if current trends continue, the Minority-Majority Transition, where people of color will become the majority as a share of the region’s population will take place as soon as 2020. In 1980, 85 percent of Northern Virginians identified as Non-Hispanic White. In 2015, from when the most recent figures are available, that number is now 40 percent.

Cassidy gave a demonstration of the Index in action, showing how to maneuver through the site, and how to filter the data. He also challenged the attendees to a “mini-quiz,” asking them to use instant audience survey devices to test their knowledge on some of the collected statistics. In most cases, the majority of the audience missed the mark.

Cassidy was followed at the podium by Richard Reeves, senior fellow of economic studies and co-director of Center on Children and Families for the Brookings Institution. Speaking on “Economic Mobility and the American Dream,” Reeves congratulated the event organizers for including so many members of the business community, saying that too often business leaders were excluded as being “part of the problem of income equality, when, in fact, they are a major contributor to the solution when brought to the table.”

In a series of slides and charts, Reeves, a British-American, offered proof that for “the bottom 80 percent on the economic scale there has been no real change in income growth or quality” while the top 20 percent are pulling further and further away. “Basically, poor people are staying poor, rich people are staying rich, and in many cases, getting richer.” Worse, says Reeves, America’s class system, most evident in educational opportunities, helps create a self-perpetuating barrier to opportunity for many. Showing a graph that illustrates “College Attendance Rates vs. Parent Income Rank in the U.S.,” Reeves called it “one of the most beautiful and terrifying charts.” As a Brit, Reeves states that he “knows a bit about a class system” and that it does exist in the U.S. — the country where he became a citizen in 2016. “And it’s every bit as ruthless as the class system in the U.K. — just less acknowledged.”

The second phase of the conference featured two panels, the first focusing on “Opportunity and Inequality” in the local education system and the second on “Tapping the Workforce Assets in our Own Backyard.” The panelists all acknowledged the challenges being faced in both those arenas, but offered some creative actions that they are taking in their areas of influence, from public education to workforce skill development, and inside major area employers.

One critical necessity that all of the panelists in the Workforce discussion agreed upon was the need to “upskill in place,” as Ken Eisner, senior manager, Worldwide Education Programs Amazon Web Services described it. “It’s getting harder and harder to get in [to our region] and with the lack of affordable housing.”

Scott Ralls, president of Northern Virginia Community College agreed that it was imperative to enhance the skills and abilities of the people already in our communities.

AFTER THE CONFERENCE, some of the attendees reacted to the event.

Lisa Whetzel, of Fairfax City, is the executive director of nonprofit Britepaths. She admitted that even with her in-depth association with the most vulnerable of the region’s populace, some of the data from the Opportunity Index still came as a surprise, “but this is just the kind of information we all need. It’s local, granular.”

Whetzel also found the event “inspiring and uplifting. Together we can do things.” Immediately following the conference, Whetzel attended the quarterly meeting of her peers in other nonprofits. “The conference got us going with great conversation and idea exchanges. We will be really looking to see if we have taken a deep enough dive through the equity lens.”

Martha Wilson, of Fairfax, was a representative of the business community at the conference, as a vice president with EagleBank in Tysons Corner. “EagleBank is already a major philanthropic organization, doing quite a lot for the community. It’s a major reason why I joined them, but I see that we can do even more if we get the word out about our efforts, especially to our own employees.”

She also has an idea about the internships that Reeves discussed during the conference. Reeves noted that employers highly value internships when making hiring decisions, but many less-advantaged youth and young adults cannot afford to take unpaid internships while they struggle to pay for their education and for the basics of daily life. “I have a suggestion on how we can help those young people, and possibly assist some of our area non-profits at the same time.” Wilson plans to get with her management colleagues at EagleBank and try to put her proposal into action.

Holly Seibold of Vienna is the founder and executive director of BRAWS — Bringing Resources to Women’s Shelters and to low income and homeless young women. Seibold found the event motivational. “It was a great event. Right after it was over, I sent an email to Dr. McDade [superintendent of Manassas Park Public Schools and a panelist at the conference] asking if his school district would like to pilot a program where BRAWS would provide free feminine hygiene products in the restrooms, at no cost to the schools.”

Julien Bois of Springfield, a partner with JustinBradley, a financial executive search, recruiting and interim staffing company, gave the conference a thumbs up, and kudos to speaker Reeves for his “candid responses to my questions.”

As the Commonwealth Institute’s Cassidy reminded the conference attendees, the Opportunity Index wasn’t developed to just tell a static story about the greater community, but rather as a tool that will help engaged citizens shape the future they want to see in Northern Virginia. The Index is available on line and access is free at www.cfnova.org/opportunityindex.