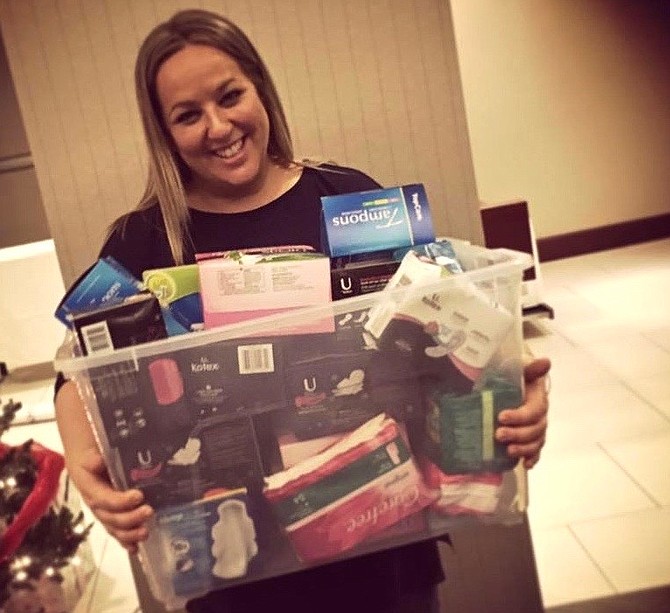 BRAWS founder Holly Seibold of Vienna, gathering donations. For a while, BRAWS was Holly. Now there is a small army of dedicated and caring people and organizations who help bring essential items – and dignity and respect – to women and girls in need.

Virginia — The first real snow event of the season did not stop a good-sized audience and more than eighty speakers from turning up at the Fairfax County Government offices on Saturday, Jan. 7 to bring their concerns and issues before the public hearing for the Fairfax County Delegation to the Virginia General Assembly, which convenes at noon, on Wednesday, Jan. 11.

The majority of speakers, both those representing organizations and those appearing as individuals, were there to talk about funding and issues related to Fairfax County schools, but there were also groups advocating for citizens with disabilities, for brain injury programs and victims, community resource programs, the legalization of medical marijuana, transportation improvements, monies to fill judicial vacancies to improve the county’s legal system, and speakers sporting “Black Lives Matter” attire who condemned the treatment of several citizens by County law enforcement. 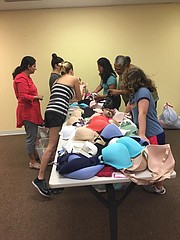 BRAWS volunteers sort through ladies’ undergarments before distribution. “A decent bra is not cheap, even the most basic one,” said BRAWS founder Holly Seibold. The BRAWS gang say they are well rewarded when they see how much these items are needed and appreciated.

And then there was the contingent from BRAWS – Bringing Resources to Aid Women’s Shelters, a 501(c)3 non-profit - led by founder Holly Siebold of Vienna. Siebold and several supporters of BRAWS were there to encourage the state delegates and senators to get behind House Bill 1593, calling for the repeal of taxes on certain feminine hygiene products, as well as toilet paper and adult diapers. The “Dignity Act,” as it has been named, has been filed under the patronage of Del. Jennifer Boysko (D-86).

THERE WAS A MOMENT during Seibold’s allotted three-minute speech where both audience and delegation seemed a bit taken aback by a public discussion about women’s menstrual cycles and the products they need during those days. “Not too many people like talking about this subject,” admitted Seibold, “but it’s a real need that gets overlooked as a result.” Despite any initial discomfort, at the conclusion of her remarks, Siebold returned to her seat to rousing applause.

BRAWS did not begin its existence as a political movement. In January of 2015, Seibold came across a Huffington Post article by Eleanor Goldberg that spoke about how homeless women and girls, and those in shelters, had difficulty getting feminine hygiene products, and often had to go without, make substitutes, or decide what other essential items - like food - they would forgo in order to purchase pads or tampons. As any woman will attest, these items are not inexpensive and since the need is recurring monthly, the expenditure often places a serious burden on the impoverished, the homeless, and even those employed but who just make ends meet. Most shelters and transitional housing services cannot afford to stock these products in addition to the other items and services they provide for homeless women and women and girls in crisis.

“I can’t tell you how that just hit me,” said Seibold. “It was something that I had never even considered, and I was horrified that there were women and girls out there that had to live like that.”

The article referenced a New Jersey non-profit that began by collecting donations of undergarments and feminine hygiene products at a “Mardi Bra” event and then distributed them to shelters. Reading that, Siebold went straight to work and held a “Mardi Braws” event at her own home and collected 150 new bras and 150 pads/tampons which she brought to facilities such as Shelter House, Artemis House and Homestretch.

The reception for these items was “humbling and overwhelming. Their genuine gratitude was embarrassing.” From that moment, what started as a once-off donation drive became a mission, and BRAWS was formed.

“These women, already struggling through some terrible challenges, shouldn’t have to deal with this added humiliation,” declared Seibold. “The pads and tampons were so appreciated, especially when they had a choice of size and type. But you should have seen when new bras and underwear were made available! These items can be really expensive – even the most basic, no-frills bras.” Seibold and her growing army of volunteers found that their “Bra Parties” at shelters were looked upon as “little miracle moments.”

“It’s pretty tough to go job hunting when you don’t have the right ‘support’ underneath the outer layers.” Seibold reminds that the women and girls in these situations may be able to find good clothing options at charity shops and distribution events, “but underwear is not something they can pick up easily. Plus, every female is entitled to brand new, properly fitting undergarments, don’t you think?”

For quite awhile, BRAWS was mostly Seibold publicizing the need, collecting and then distributing items with the help of a few friends, but things are really speeding up. There is a Board in place now, there are dedicated volunteers to distribute, to help collect, and to help organize fundraisers and donation events. BRAWS has even been the recipient of a grant or two with which to purchase even more supplies for their clients. According to their 2015-2016 Annual Report, BRAWS has added dozens of partnering shelters, held countless donation drives and fundraisers, and served more than 2000 women and girls, providing in excess of 7,000 bras, underwear, and pads and tampons.

With all that in motion, how did they get to Virginia HB 1593? It was the natural next step, according to Seibold. Her growing network of like-minded charitable warriors has shown that there are multiple jurisdictions across the country, from individual municipalities to state-wide efforts, that are lobbying for a repeal of taxes on feminine hygiene products, or at least to treat these items like other “non-luxuries.”

LATE LAST YEAR, the D.C. Council approved a measure to eliminate sales tax on feminine hygiene products. Councilmember Anita Bonds released a statement that said “Women…and persons with disabilities who need these products should not be taxed for natural bodily functions.”

Seibold was one of the people who provided testimony in support of this action before the D.C. Council. Seeing similar efforts succeed elsewhere, including the neighboring District, had her wondering why Virginia couldn’t do the same, especially when she is a personal witness to the need.

Her first attempt, via her own representative Del. Mark Keam (D-35), never saw the bill leave committee. Undaunted, she is trying again, with more support and more partners and with the sponsorship of Del. Boysko who has put forth the “Dignity Act” for consideration in this year’s legislative session.

“No guarantees, of course,” acknowledged Seibold, “but we will keep up the fight. Taxing these items is a discrimination against women.” Aside from making her case before the Fairfax Delegation during the public hearing, Seibold is urging citizens from the entire Commonwealth to contact their representatives and show their support for the passage of HB 1593. “It’s the right thing to do.”

INFORMATRION about BRAWS, how to get involved or donate, is available on their website www.braws.org or via their Facebook page. “Mardi Braws 2017” is also right around the corner. Check those sites for information and tickets to the event, which will be held at Sea Pearl Restaurant in Merrifield on Feb. 24.