Trees in Fairfax County Continue To Be Targets of Insects
Votes

Trees in Fairfax County Continue To Be Targets of Insects 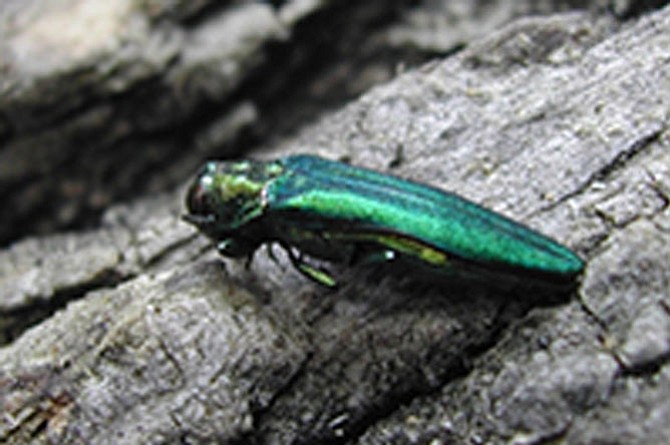 The emerald ash borer is an invasive species that wreaked havoc on the ash trees in Fairfax County. Photo by Pennsylvania Department of Conservation and Natural Resources

The fall cankerworm, Alsophila pometaria, is a native defoliating insect found throughout much of North America. The caterpillar stage of these insects is often referred to as inchworms or loopers. 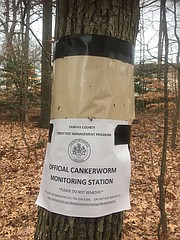 In Newington, the county is preventing female cankerworms from climbing into the leaved canopy and defoliating in the spring.

The odds are against trees in Fairfax County in terms of soil compaction, construction, air pollution and insects as the Urban Forest Management Division sets its sights on cankerworms this winter. Unlike the emerald ash borer that went for the trunk and branches of ash trees, the cankerworm goes for the leaves in the canopy.

“The cankerworm larvae (caterpillars) feed on the leaves of a wide variety of trees,” said Troy Shaw, coordinator of the Forest Pest Program in the Fairfax County Urban Forest Management division. Shaw said the cankerworms target the first set of leaves, causing the trees to produce another set of leaves, which depletes the tree’s stored food reserves. The Urban Forest Management are currently trapping the females with a brown band of treated paper wrapped around trunks of trees that is “coated with a glue-like material that is intended to capture female cankerworm moths as they climb the tree in the winter months,” Shaw said. “We use the data collected from these traps to try to predict where defoliation is going to occur the following spring,” he added. The cankerworm is not fatal to every tree it defoliates but defoliation may cause tree mortality, and the county is targeting the Lee and Mount Vernon districts this winter. In the past, up to 5,000 acres in the county have been defoliated by cankerworms.

In years past another insect, the emerald ash borer, was threatening the ash trees across the area, resulting in many of them to be cut down to deprive this wood-boring beetle food it needs for survival. The emerald ash borer will kill ash trees within three years of infestation, and this poses a danger as a dead limbs can break off and cause injury. For this reason, the county cut down many ash trees, and treated a few that were on county-owned property. Treating an ash tree for this pest involves injecting pesticide into the trunk of the tree, according to Shaw, but the borers are so widespread “it was never a viable option.” If homeowners are interested in protecting individual trees on their private property, the county can provide them with advice on how best to proceed. The county has released emerald ash borer parasites in suitable areas of the county in the hope that they will provide control in the future, Shaw said.

Although the emerald ash borer is a non-native species that can be introduced to the area in imported firewood, or trees cut from other locations, the cankerworm is a native species, so the trees in this area have a natural defense to some extent.

Fall cankerworms feed on a variety of trees but tend to prefer maples, hickories, ashes, and oaks, all of which are found in abundance throughout Fairfax County, according to the county website. Homeowners can fight back though if infestations are detected in their yard. Fall cankerworms are a source of food for wildlife, such as birds and beetles. Residents can create an inviting habitat for wildlife on their properties if they are looking for a natural control for fall cankerworms or other undesirable pests, according to information released by the county.