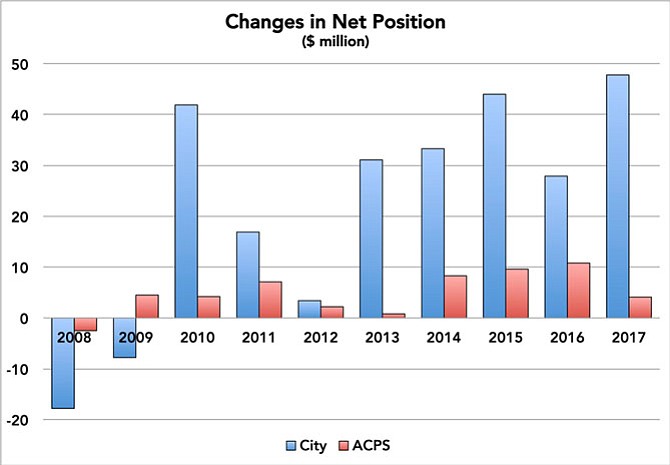 The city’s CAFR explains that it serves “to present fairly the [reporting entity’s] financial position,” adhering “to the principle of full disclosure so that the reader may gain the maximum understanding of the [reporting entity’s] financial affairs.” It serves as a kind of counterpart to the budget; whereas the budget looks to the future, the CAFR looks in the rearview mirror, showing, “What did we actually do and how did that financial performance end up?” said Alexandria City Public Schools (ACPS) CFO Michael Herbstman. Each document includes financial statements, an independent auditors’ report, various statistics and discussion and analysis from the reporting administration. The City Council and School Board received their FY17 CAFRs Nov. 14 and Dec. 14, 2017.

The auditing firm CliftonLarsonAllen probed various aspects of the city and schools’ financial operations in order to obtain “reasonable assurance” that both administrations’ financial statements “are free of material misstatement.” Based on their tests, the auditors’ subsequent “unmodified” or “clean” opinion is “the best form of assurance you can get on your financial statements’ audit,” said the firm’s Greg Bussink. The city and ACPS have also received various awards for excellence in financial report for many years running.

Various metrics indicate fiscal health. One is total “net position.” According to the Governmental Accounting Standards Board (GASB), a standards-setting organization, “Net position is the difference between assets and deferred outflows, on the one hand, and liabilities and deferred inflows, on the other.” These include non-monetary capital assets (land, buildings, etc.) and long-term bond and/or pension payments. Net position “is effectively the bottom line,” said Kendel Taylor, the city’s finance director, in an email.

The city’s CAFR says that, “Over time, increases or decreases in [a reporting entity’s] net position are indicators of whether its financial health is improving or deteriorating.” The city and schools’ net positions have trended upward over the past decade, increasing year-over-year in FY17 by $48 million (12 percent) and $4 million (2 percent), respectively.

Another indicator of fiscal health is “fund balance.” Fund balance is similar to net position, though narrower and shorter-term in scope, indicating only the net of financial assets and liabilities of specific funds maintained by the reporting entity — especially the General Fund (general operations) and the Capital Fund (capital infrastructure projects). Fund balance is of “central importance to the credit reviews performed by municipal bond analysts,” serving “to identify the available liquid resources that can be used to repay long-term debt,” according to GASB. This is particularly germane in the case of the city government, upon whose bonding and taxing authority ACPS also largely depends for its revenue; ACPS does not have such authority of its own. The city and schools’ total governmental fund balances have also trended upward over the past decade, increasing year-over-year in FY17 by 78 million (22 percent) and $15 million (66 percent), respectively.

Fund balance is an especially useful indicator for telling the school system’s fiscal story, which unfunded state-level pension liabilities might otherwise distort. In FY15, accounting standards changed such that reporting entities started including such pension liabilities in their calculations, causing a big dip in net positions. The city’s net position stayed positive after the adjustment; but ACPS, having assets at the time equalling only about one-thirteenth the city’s, dropped into deficit territory, where it remains despite having continued to climb from year to year. ACPS staffers say they’re doing the best they can with what they can control.

“When we pull in the unfunded teachers’ retirement liability, that’s a long-term obligation, it throws us into a deficit position. But our annual short-term to medium-term picture that most governments operate within, that’s their horizon, we’re fine,” said Michael Covington, ACPS’s accounting director. For FY17, ACPS reported a net position deficit of $164 million but a positive fund balance of $38 million. Eventually the state, which controls pension contribution rates, will “have to set rates that are higher than the actuarial calculation [i.e., statistical forecast] in order to catch up that unfunded liability. We’re sort of kicking the can down the road, at the state level.” But at the local level, “we have sufficient fund balance, compared to even other jurisdictions, and compared to what our budgeting process determines that we need,” he said.

Cost-per-pupil, an efficiency measure, also helps accurately to tell ACPS’s story of fiscal stewardship, say Herbstman and Covington. While ACPS’s student enrollment increased by 43 percent in the past decade, its expenditure per pupil has fallen by 5 percent. ACPS still spent more per student than all other regional school divisions except Arlington County and Falls Church City. But ACPS also has a relatively larger proportion of higher-cost students. In FY17, 29 percent of ACPS students were “English Learners” and 59 percent were eligible for free and reduced-price meals — in both cases, the third highest of 10 regional school divisions, according to the FY18 “Washington Area Boards of Education Guide,” an annual report. English Learners require additional teachers and support systems; and while the free and reduced-price meals themselves are federally funded, the percentage of eligibility is a good proxy for other non-federally funded student services, such as extra tutoring and family counseling, said Herbstman.

The city’s CAFR also provides information about the city’s debt. Three debt ratios that the city tracks have all increased over the past decade: debt as a percentage of total fair market value of taxable properties; as a percentage of per capita income; as a percentage of general government expenditure. But all measures are within their state-mandated and/or self-imposed limits. In the first case, while the state constitution would allow the city to carry debt equal to 10 percent of total fair market value, the city carries only 1.43 percent. That leaves $3.3 billion in untapped legal debt capacity.

Asked why the city doesn’t issue more bonds in light of its many looming capital projects, Taylor said in an email: “The issuance of significantly more debt beyond what is planned could negatively impact the city’s bond ratings. … City staff have looked at the debt ratios of our neighbors and other jurisdictions who also hold AAA and Aaa ratings from Moody’s and Standard and Poor’s and believe that the current debt policy is appropriate for the city’s economic situation and population. It should be noted that last May City Council approved an increase in the debt policies to recognize changes in the fund structures, the ratios of other Northern Virginia jurisdictions and the city’s considerable capital needs. This will increase the city’s ability to issue debt to fund infrastructure investments.”

Taylor added: “We’ve made a conscious effort to try to increase General Fund Balance, at the recommendation of credit rating agencies.” The city has beefed up its General Fund balance as a percentage of General Fund revenue to 15.96 percent — the highest it’s maintained in the last decade above its self-imposed floor of 10 percent. “This reserve is available to address financial emergencies and fluctuations in revenue cycles. … Having a reserve is important to the credit rating agencies. It reflects our ability to respond to extraordinary events, as well as to smooth the effects of changes in the economy (sequestration, the recession). We would never rely on this as an ongoing source of funding, but we can use fund balance for emergencies,” she said.

The city and schools have posted their CAFRs on their respective websites.