Fairfax Ringfinder reunites lost heirlooms with owners; gets many smiles in the end. 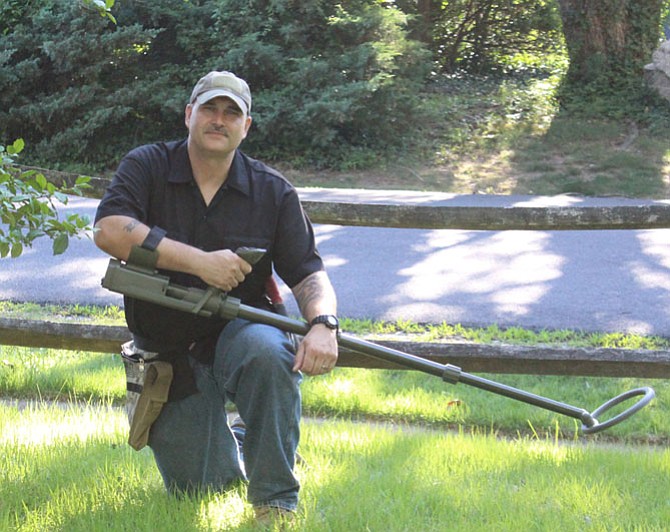 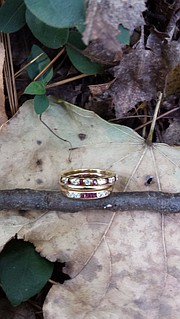 The family heirloom lost in Vienna garden but found by Roberts and returned to its owner.

While at the backyard mulch pile, a Vienna resident was scattering some fruit scraps when the ring on her finger fell off, a family heirloom that had a lot of meaning. In came Earl Roberts, a City of Fairfax resident that is part of a loosely knit group called “The Ringfinders,” and found the ring after a few minutes.

“I had her reenact the throw, within a couple of minutes I found the ring,” Roberts said.

He could never forget “the smile on her face,” he said.

THE SMILES are one reason Roberts got involved with this craft, using his metal detector when all hope is lost for the jewelry owner.

Chris Turner from Vancouver, British Columbia, Canada, is the originator of "The Ringfinders," which is an online directory of metal detecting specialists that will help people find their lost jewelry at beaches, parks, lakes and yards all around the world, as stated on their website. Although Turner has been involved with metal detecting since the 1970s, he started The Ringfinders in 2010. "My goal is to help get you reunited with your lost jewelry," he said on his website. There is a "Book of Smiles," section on the site, showing how happy folks get when their jewelry is found.

Although there are charges for this service, "the members listed on The Ring Finders directory all set their own rates and terms, and no recommendations, guarantees or endorsements are made regarding any of the individuals or businesses listed," it states. There are contacts all over the U.S., Canada, Hawaii and even as far as Peru, according to their map.

Many of the cases Roberts has been working involve yard work and the rings or jewelry comes off unexpectedly.

This was the case earlier in 2017 when a client in Fairfax was clearing out some ivy, put his ring in his pocket, and it came out during the day somehow. “There was a lot of ivy to search, right before dark I found it,” Roberts said.

He’s even been called to Maryland’s eastern shore in 2016 when a ring was lost in the surf at a beach. “We actually found the ring, it took two days, we had to wait for low tide,” he said.

Roberts is not one of those retirees at the beach who mans the metal detector at sunrise and spends a few hours with a sand sifter to find loose change from strangers, or a Civil War relic hunter. It started as a hobby when he was in Okinawa with the Marine Corps and took his metal detector to the beach where there was a beach assault in World War II and found two or three knives, a bayonet, a helmet, uniform buttons and a set of dog tags. He even worked with a Japanese museum when he was over there.

TREASURE HUNTERS with metal detectors are shunned most times because of the damage they do while digging things up, like in the case with Civil War relics, but that isn’t the case, Roberts said. The jewelry is right on the surface, maybe under some leaves, but “it’s not six inches in the ground,” he said.

There is a Northern Virginia Relic Hunters Association, organized in February 1972 in Centreville, whose main source of relics is of the Civil War era, but they do not encourage relic hunting in parks and privately owned land. This is where the negative connotations of people digging around may come from. The NVRHA has supported various efforts whose ultimate goal has been the preservation of threatened historical sites, their information states.