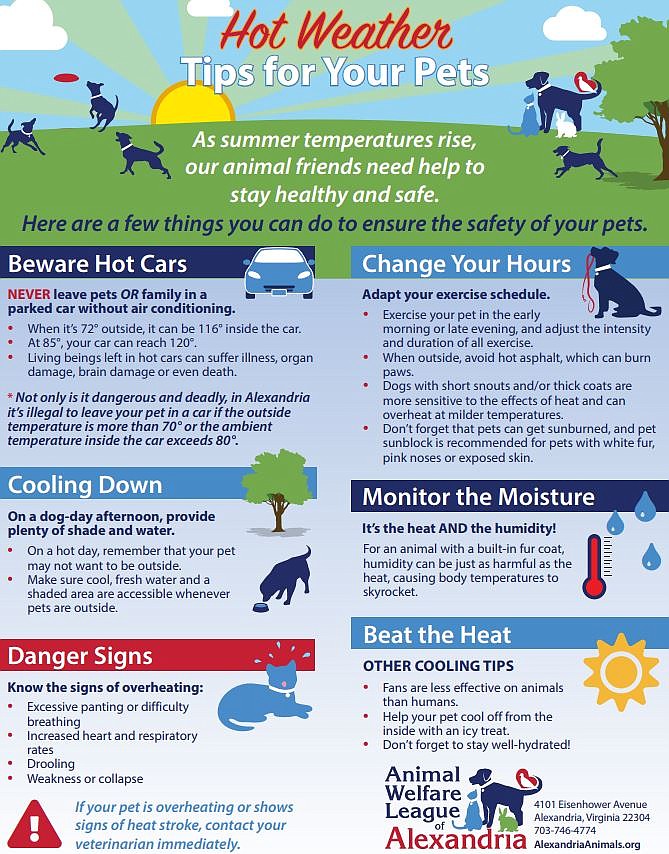 Guide to keeping pets safe in the heat. Photo contributed

For many Alexandrians, a heat wave can be a mild annoyance. But for those most vulnerable — the elderly, disabled, and local animals — in the city, a heat wave can pose a serious health risk.

One group particularly vulnerable during a heat wave is Alexandria’s homeless population. Jessica Lurz, Office of Community Services director, said there’s not a huge impact in demand for services during a heat wave but that the city does respond to check in on clients who might be experiencing homelessness. The Carpenter Shelter, a homeless shelter in Alexandria, extends its hours during a heat wave to allow people to come inside and get cooled off. Other facilities like libraries and recreation centers are popular refuges from the heat.

“Clients who don’t have regular fixed residence have to figure out a place to cool off and get indoors,” said Lurz.

But keeping those facilities running during a heat wave can be a task in and of itself. Bill Eger, energy manager at the city’s Department of General Services, said, “The majority of the issues for extreme heat is for our facilities. When we talk about impacts to extreme heat, it’s really on comfortability of those who work and visit those facilities.”

Eger said the HVAC systems across the city were built to handle average temperatures. When temperatures reach extremes like they did last week, that can put a serious strain on the system. During heat waves, Eger says his teams are sent around the city responding to calls for service and checking on the health of the system.

“If they fail, we have to respond quickly and adequately,” said Eger. “That’s another stressor we face in these heat waves.”

Throughout the heat wave, Eger said they were lucky: the city didn’t have failures outside of the normal range.

“We haven’t seen anything that would suggest the system was pushed beyond limits,” said Eger. “That doesn’t mean we haven’t had to respond and make sure that the systems are still in good working order and not exceeding level of dangerous operating conditions.”

Meanwhile, the Department of Community and Human Services works to get cooling and air circulation systems into local homes.

“Some families, maybe they have housing but children have asthma or [there are] elderly adults,” said Lurz. “Heat can exacerbate symptoms, we want to make sure cooling assistance is available for people.”

There’s two programs in Alexandria designed to help the vulnerable have access to cool temperatures. The first is the Virginia Dominion Energy Sharing Program, which offers money to help income-eligible families who have received a shut off notice for their power.

The second program is the Virginia Energy Assistance Program, which offers financial assistance in the summer and winter to low income households for purchasing or repairing fans and AC units. Lurz said the programs run from mid-June to August, and in June they see high numbers of people apply for assistance.

Velda Weathers from the Division of Aging and Adult Services, said the Virginia Energy Assistance Program helps provide fans and cooling units for elderly and disabled residents who are income eligible. In Alexandria, that’s less than $1517.50 per month for a single person household, or $2570.50 for a two-person household.

“On those days where humidity made it up to 111, people were needing those fans,” said Weathers. “People have been thrilled and grateful. People are very appreciative.”

One year, Weathers said there was a large high rise condominium on Duke Street where the air conditioning broke down for more than a week. Weathers said it was all hands on deck to go throughout the building and make sure the residents were able to get access to fans. Fortunately, Weathers said they haven’t seen any major AC breaks so far this year.

The heat wave can also have a big impact on Alexandria’s animals, both domesticated and wildlife. Gina Hardter, senior manager for public relations for the Animal Welfare League of Alexandria, said the heat is something that needs to be taken into consideration when caring for animals.

“The heat wave impact can vary from animal to animal,” said Hardter.

In Alexandria, Hardter said most of the calls are about animals in cars.

“It is illegal to leave pet in car if outside temp is more than 70 degrees outside or inside car at 80 degrees,” said Hardter. But Hardter also said there are other calls about animals being outside. “For animals with thick coats, like huskies, the heat can affect them more. When you keep your pet inside, that’s a benefit.”

Hardter encouraged pet owners to change up how they are active with their pets during heat waves.

“Don’t do a run at noon,” said Hardter. “Go out at earlier or later times, and avoid the hot asphalt. People don’t think about that. We’re mostly wearing shoes, but when you think about how much heat that asphalt sucks up it can really cause damage on paws.”

Hardter said there can be other health concerns that many pet owners may not consider when it comes to summer activities.

“People don’t think about pets getting sunburned, but dogs with white fur or exposed skin can get sunburned,” said Hardter. “There is pet sunscreen if you anticipate spending a lot of time with the dog outside, but it’s but better for them to be staying inside.”

Hardter also said animals with shorter snouts can have increased difficulty breathing during hot weather, singling out pugs in particular as a dog vulnerable to heat extremes.

“Keep an eye out for danger signs of overheating, like excessive panting, difficulty breathing, increased heart rate,” said Hardter. “Those are really danger signs. Connect with vet at that point. They have access to helpful tools.”

For the wild animals in the area, Hardter said most of them have a good enough sense of where the water is and where to get cool. While many babies born in spring are still young during the heatwave, Hardter said wild animals also tend to mature quickly.

Even residents who aren’t particularly vulnerable to the heat wave may have noticed some impacts over the last few days. Jeff Duvald, deputy director of transportation and environmental services, said the heat wave forced the city to adjust some of its services. Trash collection typically starts earlier in the day during the summer to try and get the work done before it gets too hot, but with workers riding on trucks all day on the city streets, Duvald says the city is forced to keep a close eye on the weather.

“We try to finish trash collection, but twice in the last week had to suspend yard waste collection because it was too hot,” said Duvald. “There’s risk overheating, heat stroke, heat-related illness issues.”

Duvald says the heat seems to be uniquely high this year.

“It’s somewhat out of the ordinary,” said Duvald. “Last summer was fairly mild. We seem to be in a period of a hot summer and there’s not a lot of hope in sight for colder weather.”