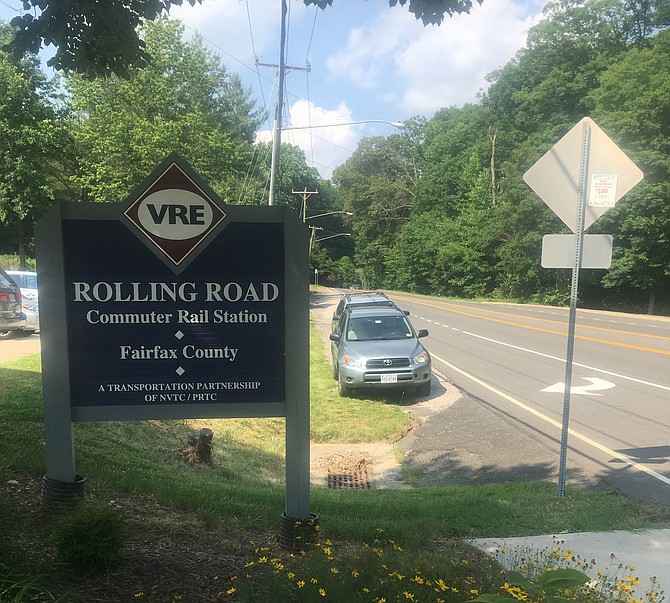 The shoulders of Burke Road are used by commuters on a daily basis when all the spots in the lot are filled. Photo by Mike Salmon. 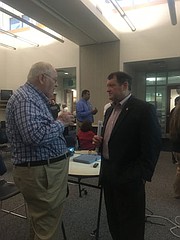 Where Burke Road crosses the Pohick Creek Tributary, the road has flooded three times this spring to the point where police had to help motorists out of the high water and close the road temporarily. This flooding danger was one of the main reasons the Fairfax County Department of Transportation is fixing this part of Burke Road with a new four-channel box culvert, and at the same time, realigning the road to address the speed limit violations and pedestrian access, and expand the nearby Virginia Railway Express parking lot, all in one project.

At a recent meeting with FXDOT officials, Supervisor Pat Herrity (R-Springfield), engineers and area residents, the plans were looked at once again after they were further refined from a similar meeting last year. “We’re looking to make the project as beneficial to the community as we can,” said Tom Biesiadny, FXDOT Director.

A SPEEDING STUDY was performed, reinforcing the community concerns about cars racing down this road, and it showed that there was a number of cars exceeding the speed limit, but this was not news to Darrell Marshall, a resident whose house faces the road and has had cars run through his fence three times. “Average speed does not mean anything,” Marshall said. “If he overshoots, he’s right in the middle of my house.” By saying “overshoots,” Marshall is talking about a 90-degree turn near the tributary that is a point of contention.

With the county plan, the road gets elevated so the box culverts can handle the high water from the tributary during high rains, and the curve is banked and straightened a bit so the traffic flows better. To some, this will invite speeding. Burke resident John Medieros believes “it’s going to be a raceway,” he said. Marshall agreed, saying “you’re designing it to be faster,” which Biesiadny disagreed to, but didn’t dwell on it. There were other points of the project to be discussed, mainly the multi-purpose trail on the side of the road and the VRE lot expansion.

The sidewalk will be completed on the north side of the road and a 10-foot multi-purpose trail will be on the south side. It requires some of Marshall’s land as well as some of the Burke Nursery land. “That trail is going to be 38 feet from my front door,” he said, noting that there weren’t that many cyclists and pedestrians along Burke Road to warrant it. One cyclist was in the audience though, and noted that currently “I don’t ride my bike around that corner,” he said, citing the danger. Supervisor Herrity intends to lessen the impact of the multi-use trail by limiting it to an 8-foot width instead of 10, a compromise that will require further discussion with the county.

Every day at the VRE Rolling Road station, there are people parked on the grass and the shoulders of Burke Road because the 375-space parking lot is not big enough, although there is another multi-level VRE lot at the other Burke train stop that has space available. Nonetheless, the county plans on adding an additional 38 spaces to accommodate the extra cars, clearing a wooded area that is owned by the county and adding pavement. “There are no right-of-way takes with this project,” said Gibran Abifadel, a Fairfax County Capital Projects official. All the work will be done at night or on the weekends so it will not impact commuters. There was a flooding concern by Medieros though, and the increase in paved surfaces will increase the water runoff.

THE TOTAL PRICE TAG for the multi-pronged project is $8 million, and is scheduled to start in July 2020 and be completed in July 2021. Comments are accepted by July 6.