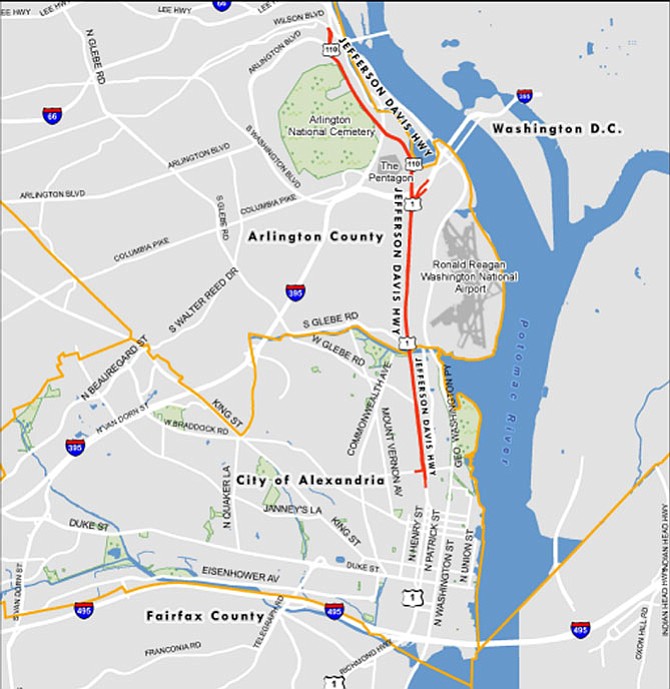 Map of where Route 1 is currently named Jefferson Davis Highway and where it is Richmond Highway. Image contributed

Alexandria — It’s a bad time to be the President of the Confederacy.

At the City Council meeting on June 23, the long discussed renaming of Route 1 in Alexandria was finally passed. Today, the street is called Jefferson Davis Highway where it isn’t split up into Patrick and Henry streets through Old Town. But starting on Jan. 1, 2019, the street will officially be renamed Richmond Highway in keeping with the name of the street throughout most of the state.

According to Craig Fifer, director of communications for the City of Alexandria, Patrick and Henry streets will not have their name changed. There will be nominal costs to the city for changing the street signs, though there are expected to be costs to residents and businesses with signs, stationary, and marketing material with the address on it. None of the street numbers will change.

The change comes on the heels of a committee that met to discuss changing or removing Confederate iconography and names from the city. The committee suggested taking an inventory of street names with Confederate associations, many of which are unclear. Lee Street, for example, is named after Robert E. Lee’s wife, a member of the prominent Alexandria family.

Despite outrage during the committee meetings by local citizens fighting to keep Confederate iconography in the city, the only speaker at the meeting was Richard Merritt, a citizen who said the street renaming didn’t go far enough to tarnish Davis’ legacy. Merritt urged the council to reject the recommendation and instead name the highway after an Alexandrian whose life and character exemplifies the values and vision of the city.

“One would have hoped for name of individual [who represented] kindness and compassion, diversity and inclusiveness,” said Merritt. “Jefferson Davis represented antithesis of those values, it’s all together appropriate for the name to come down to make space for another name that would dignify and honor city for decades, if not centuries.”

Merrritt’s argument had some agreement from the council, but it was complicated by a number of factors. For one, Arlington will be seeking to change Jefferson Davis Highway in its locality to whatever name Alexandria selects. As a county, not a city, Arlington is required to seek state approval to change the name of the highway. It’s request earlier this year was denied, but Councilman Paul Smedberg said the tone of that conversation is likely to be different with Alexandria already having changed the name.

“I had initially felt, and still feel, that it could have been named after a noted local or someone national,” said Mayor Allison Silberberg. “This is complicated by… having a continuity with Arlington.”

For Councilman John Chapman, there was also the concern that if the renaming process were sent back to a committee there was the risk of losing the moment to change the name. Chapman also said that no single name had jumped out during the process as something the community had agreed on, and he doubted one would again if it were sent to a committee.

“I don’t like Jefferson Davis Highway, and I’m happy to see it [changed],” said Councilwoman Redella “Del” Pepper. “That’s the main satisfaction. I’ll be pleased to name it Richmond Highway.”