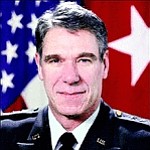 Max Wilbur Noah, Lieutenant General, U.S. Army (Ret.) died on Friday, June 15, 2018 at the age of 86 from complications from a rare autoimmune disease known as Churg Strauss or EGPA.

Noah served 35 years in the United States Army retiring as the Comptroller of the Army. He commanded at many levels including Commander of the United States Army Engineer School at Fort Belvoir, Huntsville Division Commander building in Israel on two critical airfields that played a part in the peace negotiations by President Carter, Commander, Saint Paul District for the Corps of Engineers, Commander, 2nd Engineer Group in the Republic of Korea, and Commander, 307th Engineer Battalion of the 82nd Airborne Division at Fort Bragg. Noah graduated in 1953 from the United States Military Academy at West Point. He was a veteran of Vietnam and Korea.

His military awards and decorations include two Distinguished Service Medals, two Legion of Merits, a Bronze Star, a Meritorious Service Medal and the Senior Parachutist Badge. Post retirement, Noah's efforts and leadership continued to be recognized serving as honorary Colonel of the 307th Engineer Regiment, receipt of the Gold Deflurry from the Army Engineer Association, and the Distinguished Alumni from Georgia Military College (GMC). Max was particularly proud of his appointment as a Distinguished Graduate of the United States Military Academy in 2015.

Noah grew up in Milledgeville, Ga. the son of Dr. Max and Dorothy Noah. He graduated from GMC and began his engineering education at Georgia Tech before receiving an offer of admission to the US Military Academy as an honor graduate of GMC. Max received his Master's in Electrical Engineering from Purdue University. His military schooling included the US Army War College and the Defense System Analyst Course.

A memorial service will be held at 4 p.m. Friday, June 29 at Woodlawn Chapel on north post, 6050 Gorgas Road, Fort Belvoir, followed by a reception and celebration of his life at the Fort Belvoir Officers Club on south post in the Castle room. His internment will take place at a later date at the United States Military Academy, West Point Cemetery with military honors.

Donations in memory of LTG Noah may be made to the National Museum of the United States Army through the US Army Historical Society (armyhistory.org). Noah also requested that his experience as a rare medical case and his remains be used to better understand Churg Strauss Syndrome (CSS) so that it can be more readily diagnosed and treated to improve the lives and survival of those who face it now or in the future. Online condolences and fond memories of Max W Noah may be offered to the family at: www.moneyandking.com and www.westpointaog.org/memorialswww.westpointaog.org/memorials.