Schmidt Not Running for Reelection to Fairfax City Council
Votes

Schmidt Not Running for Reelection to Fairfax City Council

Called it an “honor and a privilege” to serve the City. 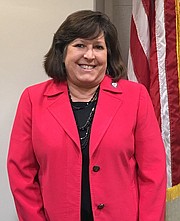 Catching many people off guard, Ellie Schmidt announced this week that she will not be running for reelection to the Fairfax City Council. She sent out an email to Mayor David Meyer, her Council colleagues and City residents on Monday, Feb. 26, telling them the news.

“I began my service to the community over 40 years ago as a Girl Scout making a documentary film on the history of the City of Fairfax. Through the years, I worked in many capacities as a volunteer celebrating the City’s anniversary and our country’s 200th birthday, bringing outstanding special events such as an unsurpassed 4th of July celebration, preserving our historic buildings, sharing education and awareness and providing service to the community in organizations such as the Kiwanis Club and the Woman’s Club of Fairfax.

“It has been a great honor representing you on your City Council over the past seven years. After much thought and consideration, I have decided not to seek reelection to City Council in the upcoming election. The City is a one-of-a-kind place; a real oasis in the middle of Fairfax County. But change can be good. Without change, things can get stagnant.

I am grateful for all of the support I have received over the years. I look forward to fulfilling my responsibilities as I complete my term. The next important task is working through the budget process. Stay tuned for what the future brings.”

IN RESPONSE to Schmidt’s post, several friends and community members wrote on her timeline to reply and wish her well. “Ellie you have been a great asset to the community,” wrote Linda Wetsel. “Best of luck to you.” Pam Jensen said she was sorry to hear this news and told Schmidt she’d been “a great asset to the City.”

Cheryl Smith wrote, “You are a compassionate, dynamic, powerful woman. I am so proud of what you have done, but so understand your decision.” Kim Luckabaugh was surprised, but she thanked Schmidt for “the many years of service you have blessed us with.”

David Bryson appreciated Schmidt’s “lifelong support” of the Fairfax Volunteer Fire Department and for her friendship, adding, “Our doors are always open to you and your family.”

Russ Stewart also thanked her for supporting the FVFD and her friends in the City. “You didn't look at us as constituents, you called us friends, and we appreciate all that you've done,” he wrote. “Thanks for being there for us.”

State Sen. Chap Petersen (D-34), wrote, “You have been a great leader in the City for more years than I can count.” Loretta Herrington thanked Schmidt for remaining true to her principles, and Joanne DeMarco – wife of Councilman Michael DeMarco, wrote, “We’ll miss your voice on Council, Ellie. Thank you for serving our community so well.”

“You have done so many wonderful things for our City,” said Claudia Lewis. “You will be missed.” And Howard Rhile thanked Schmidt for everything she’s done for the arts. “You are a treasure,” he wrote. “Hope you will continue to be part of the City.”

Actually, Schmidt was the second Council member to state her intention not to run for reelection. Just two weeks ago, during the Feb. 13 City Council meeting, 24-year Councilman Jeff Greenfield announced he would not seek another term.

After Tuesday night’s Council meeting and work session, Schmidt said, “It truly has been an honor and a privilege to serve the City. No one has a greater love for it, and I’ll always stay involved.”