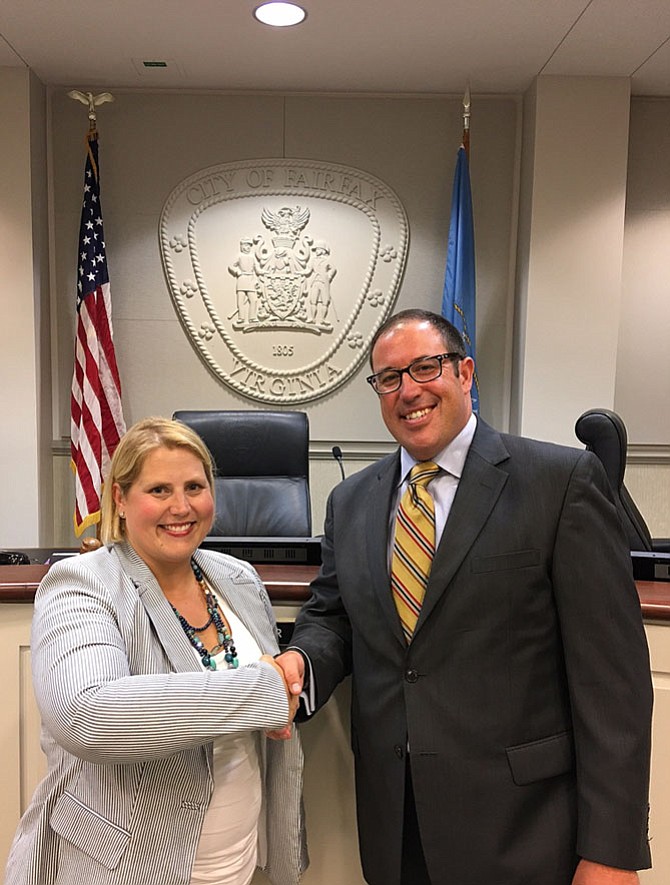 From left: Mayor David Meyer presents Dan Drummond with a photo of a bench that’ll be placed in Ratcliffe Park in his honor.

After serving on the Fairfax City Council since 2008, Dan Drummond announced in March 2014 that he wouldn’t be seeking re-election. “I’m not retiring [from public service], just hitting the pause button,” he said. “I’m always going to be involved with the community in some way.”

After all, he’d been active in his community for many years. He was on the school bond task force in 2004, and he also served on the Parks and Recreation Advisory Board and the Economic Development Authority. But he didn’t expect to return to City Council.

However, when former Councilman David Meyer was elected Mayor in February, Drummond was asked to take his spot on the Council until a new Council member was elected. He graciously agreed, serving until Jennifer Passey won the Sept. 12 special election. And during his last meeting as a Councilman, on Sept. 5, he made a special, farewell statement.

“When I announced in 2014 that I would not be running for another term on the City Council, I said that I was ‘hitting the pause button,’” said Drummond. “Little did I know that I – or, rather, my colleagues – would be hitting the ‘play button,’ three years later.”

However, he said, “I was very honored and humbled by this appointment to the City Council that began in February and will conclude after certification of the special-election results. I want to thank all of my colleagues for the opportunity to serve this great City. We have had an exciting, few months together and I will miss serving with all of you.

EACH OF YOU bring special talents and skills to this Council and this community,” continued Drummond. “Jon [Stehle], thank you for your energy, ideas and dedication to finding ways to make local government work even better for residents. And, of course, thank you for the friendly hockey rivalry.”

To Janice Miller, he said, “You have been a great friend, and I have always looked up to you as the embodiment of what public service is about. Whether on the School Board or Council, you are passionate about serving and helping your community.”

Noting that Jeff Greenfield is another person he’s known a long time, Drummond told him, “I very much value the leadership you bring to the Council, your insights and your wisdom. As the longest-serving member of this body, you bring a tremendous amount of knowledge that residents should appreciate.”

As for Ellie Schmidt, Drummond said, “I have long appreciated the way you approach your service to our community. You work hard to understand the details of each issue and make sure that everyone’s voice in the community is heard.” And to Michael DeMarco, he said, “As another person whom I have known for some time, I have very much valued your strategic approach to governing, your thoughtfulness and your desire to find innovative ways to make government work for everyone.”

Drummond then told Meyer, “We were both elected together – along with former Council member and Mayor Steve Stombres – right at the cusp of the Great Recession. And we shared many experiences together that I believe strengthened our Council and this City. I have also always appreciated your thorough understanding of the issues, the way you connected with the community and your leadership on issues you felt passionately about.”

He further thanked “Our great staff, especially City Manager Bob Sisson, City Clerk Melanie Crowder, City Attorney Brian Lubkeman, Assistant City Manager David Hodgkins” and the rest of the City staff and department heads. “You all work so very hard on behalf of the residents and businesses of this City,” said Drummond. “I only wish they could see all you do every day so they would know how fortunate they are to have 400-plus, dedicated, public servants.”

He also expressed his gratitude to “the community that welcomed me back on Council. I very much appreciate the comments, kind words and even the complaints that have come my way, over the last several months. And of course, to my beautiful wife, Kerry, and my three children – Sadie, Patrick and Liam – thank for your support while I served. I love you very much.”

To the Council overall, Drummond said, “Together we have worked hard over the last several months on the issues our City faces and citizens care about. While we may not have always seen eye-to-eye, we never were disagreeable about disagreeing. Rather, we sought common ground in the common purposes of serving our City.

“This is certainly the Fairfax City way of governing, and I hope people recognize that this is the way government should work,” he continued. “And as I leave office again, I just ask that my colleagues and our community as a whole continue to be kind to one another as we work for the common good of our neighbors, friends and family. Thank you all again for allowing me to serve; I am forever grateful for the opportunity.”

BEFORE TUESDAY night’s (Sept. 26) Council meeting, Meyer presented Drummond with a photo of a bench that will be placed in Ratcliffe Park in his honor. “Dan was always pleasant, fair-minded and a pleasure to work with,” said Miller. “Thanks, again, for all you’ve done for us.”

“It was a great honor and privilege to serve our community again,” said Drummond. “And congratulations to Jennifer – you’re going to do a great job.”