‘You’ve Got To Sustain Them’ in Alexandria
Votes

‘You’ve Got To Sustain Them’ in Alexandria 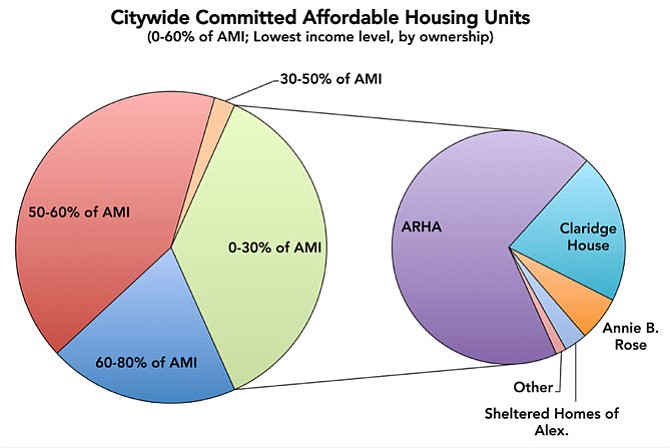 The Alexandria Redevelopment and Housing Authority (ARHA), which administers federally-subsidized public housing, provides the majority of housing options for households making 30 percent or less of the area median income (AMI) — $33,000 or less for a family of four. Claridge House and Annie B. Rose, which provide low-income housing for seniors, utilize “Section 8” vouchers, also a federal program. Sheltered Homes of Alexandria is a nonprofit. (Source: Alexandria Office of Housing, dashboard.alexandriava.gov. Data are approximates; the range of rent levels at a given site may fit largely but not exclusively into one category.)

Resolution 830 is a 1981 agreement between City Council and the Alexandria Redevelopment and Housing Authority (ARHA), which administers federal housing programs like public housing and Section 8 vouchers locally. It commits the two bodies not to diminish ARHA’s stock of 1,150 subsidized housing units through redevelopment. But shrinking federal subsidization makes it increasingly hard for ARHA to meet this obligation. The working group will recommend how to revamp Resolution 830 in light of new constraints and opportunities.

Participants discussed the requirement that redeveloped units are “substantially equivalent to the units be replaced.” Should this clause remain? What specifically should it mean? Interpretations have diverged. ARHA tends to think in terms of the number of units, but not necessarily affordability levels. This allows new higher-rent units to generate additional operating revenues, offsetting dwindling federal dollars. The city tends to think in terms levels of affordability comparable to what’s being replaced. Specifically, affordability targeted at the city’s lowest income households — those making 30 percent of less of the area median income (AMI), about $33,000 per year for a family of four. ARHA says it can’t stay solvent if it serves only this lowest-income stratum; even with sufficient capital for redevelopment, low rents wouldn’t cover ongoing operations.

ARHA provides most housing options for the city’s lowest-income households. To the degree ARHA moves away from this, no institution is poised to step into the breach.

Substantial equivalence “needs to be more detailed,” said Kevin Harris, president of the ARHA Resident Association. Tenants occupying units that undergo redevelopment receive special vouchers, enabling them to return to higher-rent replacement units, but without increasing the amount they were paying previously. But subsequent tenants don’t get those vouchers; they would pay at a higher level. This trend may amount to “phasing people out of even being able to have any type of housing situation,” said Harris.

Substantial equivalence should at least mean “equal to or greater than,” said the Rev. David Gortner of Virginia Theological Seminary. Replacement units should be “on or as near as possible to the original site, or having similar city-based amenities … Public transportation is the biggie.”

Participants discussed whether the city should commit to funding units with rents affordable for the lowest-income households. Some worried that such a commitment “would take from … other programs,” or “backfire” if future city revenues can’t support it, said Harris. Others thought “the city should play its role in helping out the situation; it shouldn’t just be solely ARHA.”

“If the city can afford it, and they can sustain it, then I think that they absolutely should do it,” said ARHA CEO Keith Pettigrew. But “once you build them you’ve got to sustain them. … Is the city going to be able to pay for that cost for an extended period of time? … That something that’s a moving target. That’s why flexibility’s so important for me.”

“A 30 percent [of AMI] unit, at the very least, has to be funded completely,” leaving no debt service requirement, said Jon Frederick of the Alexandria Housing Development Corporation (AHDC), a nonprofit developer. Since a debt-free unit costs about $450,000, he reckons that redeveloping all 1,150 Resolution 830 units at the deepest affordability levels would cost about half-a-billion dollars. That’s over time and including all sources.

Participants discussed whether Resolution 830 should expand to include city-subsidized units developed by entities other than ARHA.

“The group acknowledged that perhaps there is a role for other housing providers, that didn’t exist when Resolution 830 was initially adopted, who can also help meet the city’s need for deeply affordable units,” said Helen McIlvaine, the city’s housing director, in an email. “How these units will be secured, and funded, is yet to be determined. It is likely that city support, whether to ARHA or to others, may be required.”

Including providers others than ARHA “should probably be a separate agreement,” said Harris.

“Practically, can it be done? … If anybody can answer that question, you’re going to make millions of dollars on the speaking circuit in every city in this country,” said Pettigrew. “I do like the concept. But how you get there, I have no idea, frankly.”

The author represents the Alexandria Housing Affordability Advisory Committee on the working group.