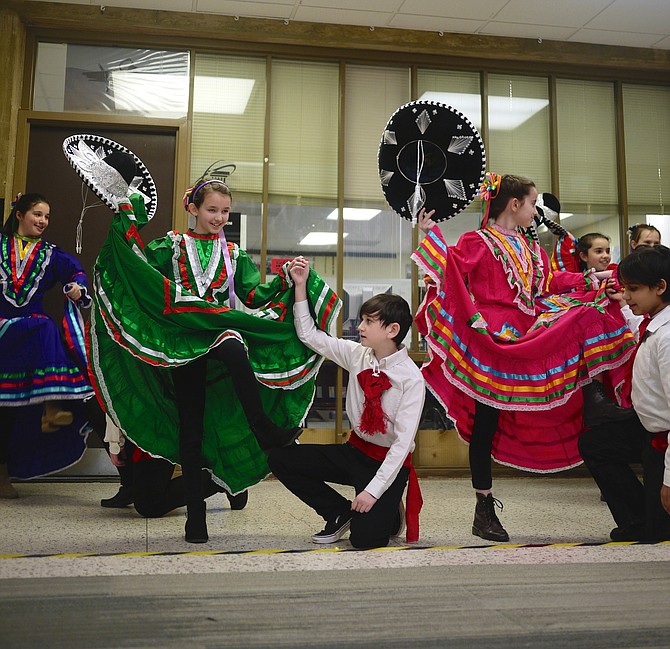 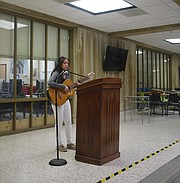 Yiming Chen plays the Gushing, a 21-string instrument that evokes the East and is played entirely from memory.

How does one say impressive in Spanish? Arabic? Chinese? French? Students from all over Arlington County showcased their foreign language skills and cultural awareness in a two-hour celebration on March 7 at the Career Center. Those students can say impressive, and some of them can spell it out in American Sign Language. They put on a program of entertainment in celebration of National Foreign Language Week, March 4-10.

As Patricia Seidler’s Claremont Immersion students presented their “Persuasive Essays” in which they debated the positive and negative effects of Christopher Columbus's arrival in the new world, Kennedy Gilbert, 9, talked about her acquisition of the language. Her classmates, for the most part, had some Spanish skills they had picked up from family or travel: but Kennedy speaks with correctly accented Spanish by virtue of starting Spanish immersion 4 years ago — and having some in Kindergarten too. She was able to write a persuasive essay, which is part of the curriculum for all students her age, and do it in Spanish. She was asked if she had ever lived in another country: “No, I’ve been in a bilingual school, and that’s why I speak the language,” she said, happy that someone had noticed her progress.

Another demonstration of skills came from Glebe Elementary 5th grade students who performed a skit in Spanish. Shelley Jennings’ class skit was “En la Tienda” (in the store) and demonstrated skills necessary to shop, or in this case, to try on clothes and dramatically exclaim to the store owner why they were not suitable. This class learned Spanish through a weekly FLES exposure: Foreign Language in the Elementary Schools is a program which gives elementary school students basic skills. Glebe Elementary was one of the first schools in the country to adopt FLES, in 2006.

A display of American Sign Language (ASL) was put on by two Washington Lee High School students in Michelle Letts’ class. ASL has the fourth largest language class enrolment in the county schools. These two students, at levels 2 and 4, looked at ease using their hands to talk. As with many professionals, they had trouble not using their hands when talking to a “hearing” person. ASL students like the extra skill knowing sign language gives them.

Chinese students working with Janet Luu were also present at the celebration. One of them, Yiming Chen, played the 21 string Gushing instrument which resembles a sitar or a zither.

Arlington Public schools has 180 Arabic and Chinese language students enrolled. Dr. Elisabeth Harrington, supervisor of the World Language Program, highlighted a program for Arabic and Chinese students which is funded by the U.S. government due to a shortage in those languages. StarTalk is a three-week immersion program for rising 6th-8th graders interested in the two languages. For more information, contact Harrington, at elisabeth.harrington@apsva.us or call at 703-228-6097.

Also at the celebration was the recital of poem “Ocean and Seagull” in Japanese by Hangri Ma, and Jennifer Guzman’s singing of “Hallelujah” in Spanish.

“I am impressed,” School Board member Reid Goldstein said at the event. “I am a big supporter of the foreign language program in our schools.” At the School Board working meeting on Feb. 27, where the board was trying to decide whether or not to cut a FLES coach position, Goldstein had asked Dr. Tara Nattrass about the Foreign Language in the Elementary Schools program, and how many students continue language after the fifth grade and become fluent by the time they graduate.

According to the APS website, the purpose of the FLES Spanish Program is to prepare students to begin developing functional skills in listening, speaking, reading, and writing in Spanish, to provide a nurturing environment where students feel comfortable learning a second language, to develop proficiency in oral and written communication in Spanish through the integration of language skills and concepts taught in the content areas, and to encourage all students to develop an openness, understanding and appreciation for other cultures.