238-year-old Eastern Red Cedar closely dates to the signing of the Declaration of Independence in 1776. 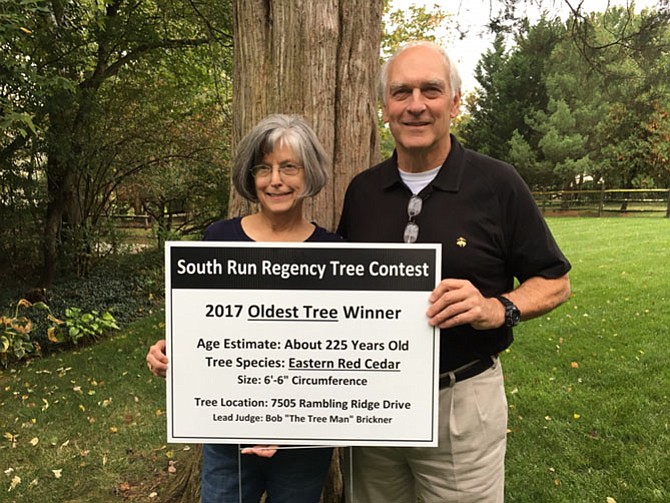 My wife and I have been Fairfax Station South Run Regency residents for more than 25 years. I’ve always been intrigued by the history of the community. However, reality indicates there are very few pre-development “historical” facts except the property was planned to be part of the “site of the original Dulles Airport” in the early 1950s; fortunately that idea was abandoned! I thought it would be a great South Run community participation project to identify the location and age of the “oldest living tree” in the development.

While most of our homes date to construction in 1985 or 1986, and arrow heads and shark teeth are rare finds in our nearby forested areas. However, since our community was built “in the trees,” for an easier but relevant project, I thought it would be a great South Run community project to identify the location and age of the “oldest living tree” in the development.

The following information was required to properly evaluate the entry:

This “amateur arborist” soon found out that different tree species grow at different rates. Fortunately for me, since all the old “community trees” were generally in close proximity, the variable nature of the soil and other growth conditions important to the professionals were deemed an insignificant growth variable for this neighborhood contest. However, finding a comparative tree-growth rate database on the internet was very challenging, but persistence led to success.

Based on the tree circumference submitted, the tree diameter (in inches) was calculated. My primary reference website noted the following few examples of “Tree Age Multipliers of the diameter: Tulip Poplar-3; Red Oak-4, White Oak 5, and Hickory 7.5. Thus, a smaller diameter hickory tree could be much older than a larger stately fast-growing poplar. Similarly, a 40-inch diameter white oak is most likely more than 50 percent older than a 40-inch diameter poplar tree.

As the contest rules noted, the property owner of the “oldest tree” will be given a field plaque for installation near the tree. While not originally presumed, a second field plaque will be presented for the “largest tree” in the neighborhood.

This was a first-time competition and intended to be a “low anxiety and fun exercise.” However, an under 10-year-old Laketree Dr. participant did ask me: “Who won last year?” I chuckled and thought an appropriate answer might be: “Nobody, as I was not retired then.” But, I bit my tongue laughing at the obvious sincere question and stated to him that such a contest has never been done before. Aren’t kids’ questions great?

As of mid-September, with the entries still coming in, I reported in the community newsletter that “a total of eleven (11) trees consisting of five (5) different species are estimated to be over 100 years old.”

The “Oldest Tree Challenge” went on for three months with 24 entries covering a myriad of tree species. The highest number of submittals involved poplar trees (8) and white oaks (6). All homeowner measurements of the largest trees were field verified by the competition organizer and field judge.

Based on the submittals, a house on Rambling Ridge Drive had the oldest tree, an Eastern Red Cedar, at 238 years old. That would closely date to the signing of the Declaration of Independence in 1776! Additionally, another on South Park Circle had an 11 feet diameter White Oak, estimated to be 210 years old. The “Largest Tree” winner was a 14-foot-0-inch circumference Tulip Poplar on Laketree Drive. This tree was estimated to be 161 years old. These three families were presented with a sign illustrating a unique status in the South Run community.

South Run has more than 530 residential units, only about 20 families made a submission for the oldest tree contest. I was surprised that two of the three final winners (i.e. the oldest and the biggest) were located within the grounds of the old farm that existed off Lee Chapel Road near the Fairfax County Parkway. My amateur inspection of aerial photos from 1937 estimated that a 130-acre farm existed in this northeast quadrant of the neighborhood. The expanse included about 60 current South Run Regency homesites, the pool area and undeveloped area of Pond Point Park. The old farmhouse was located on the hill at the current corner of South Park Circle and Rocky Ravine Drive. The largest holly tree submitted is about 180 years old and was a survivor of that large farming tract.

For history buffs, the U.S. Civil War of the 1860s was almost 160 years ago. Of the 24 entries from the 20 participants, eight trees in South Run were entered that were estimated to be older than 160 years.