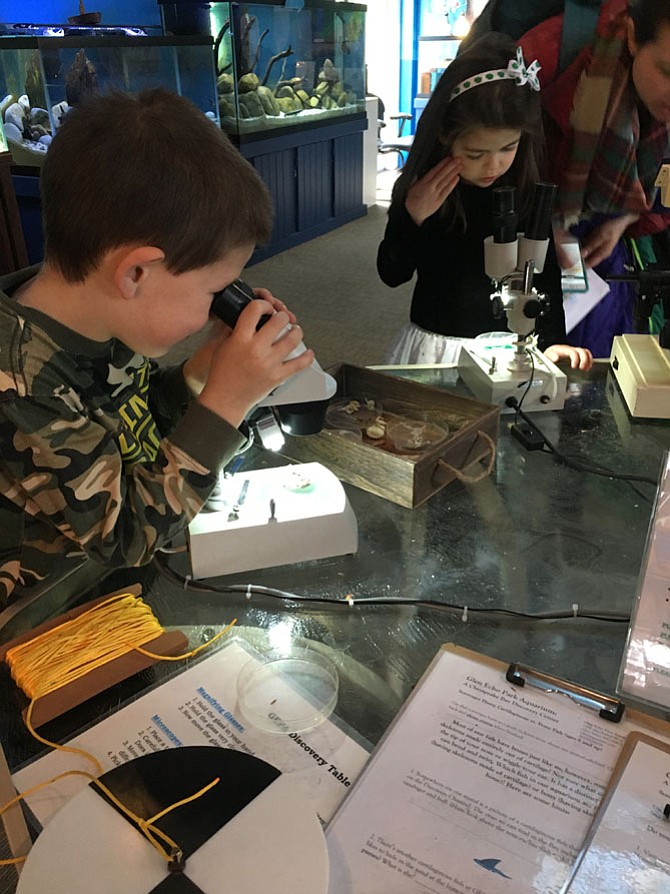 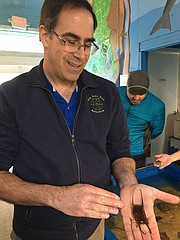 “We chose that day because it is ‘talk like a pirate day’,” said Andrew Wilson, director of the aquarium.

The space outside the aquarium has a wooden climbing structure that Wilson had reconfigured to resemble a pirate ship.

But pirates and the booty that may lie under the waters of the bay are not the focus of the aquarium. It’s the aquatic animals and the ecology of the rivers flowing into the bay that is.

The walls of the aquarium building are painted with murals that tell the story of water as it flows from western Maryland streams, creeks and rivers, traveling through the state to the Chesapeake Bay.

Around the room are large aquariums at child-eye level with samples of local aquatic animals. Some of the aquariums have themes — such as the apparently empty one midway along the right side of the room.

Sure enough, there was a flounder resting on the bottom buried in sand and several small shrimp, so light as to be translucent and hard to see.

By far the most popular display at the aquarium is the touch tank, Wilson said.

On a recent Saturday, Jake Norton, a volunteer at the aquarium, worked the touch tank with Sandy Burk, an employee.

Norton, who lives in Alexandria, volunteers every other Saturday, he said.

“I want to be a marine biologist,” he said. “[This is] always enjoyable, I’ve come to care for all the animals here as though they are family.”

Though he said he doesn’t have any favorites, he said he did particularly like the eel and the catfish.

“The kids aren’t allowed to reach into the water,” Burk said. “But we pick up the animals and let them touch them.”

That is because children could have lotion, particularly sunscreen, on their hands that could harm the animals, Wilson said.

The aquarium is small but friendly and definitely hands on. There is a discovery table outfitted with magnifying glasses and microscopes and plenty of specimens for visitors to examine.

Outside there is a sand table for digging and playing, water buckets for measuring alkalinity and a tube for climbing through. Soon there will be box turtles in their own yard.

March 31 will be Turtle Day at the Aquarium.

“Our box turtle is making his spring debut and he’s bring three new friends with him,” according to the announcement for Turtle Day. From 11 a.m. to 4 p.m. the aquarium will offer all things turtle: crafts, talks, and activities.

Wilson is available to answer questions and show off the animals at the Aquarium.

“We love to help people see things,” he said. “Because we are small we can walk around and show things,”

Wilson is the owner of Under the Sea, a company that makes aquatic presentations at local schools.

“It was my dream to have a place where people could visit,” he said.

When he learned the space was available at Glen Echo Park, he knew he had found a home for his dreams.

Regular admission is $6, children under 2 are free. Seniors and military are $5. Admission is valid for the whole day.