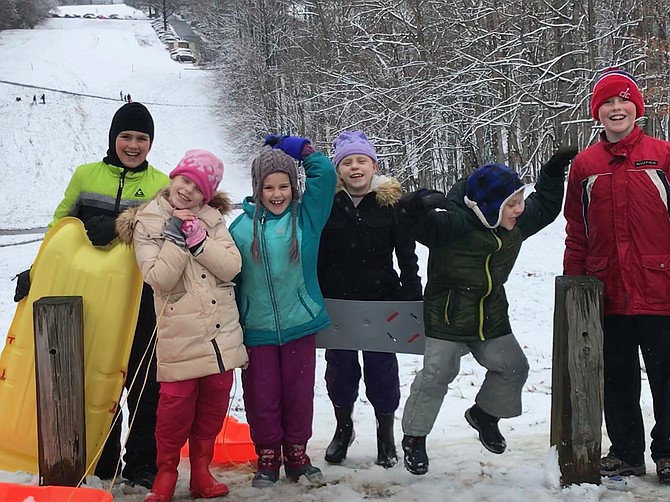 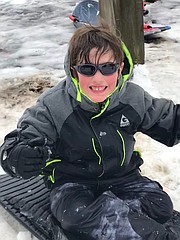 Luke Jones, 8, of Reston, spends a snow day with his family on the long steep sledding slopes of Mount Reston. Luke's dad, Steve, has been coming to the slope for 38 years, since he was a boy. "Reston is the best place to live," said Steve Jones.

Ray Nahorniak and Gus Koustens enjoy an afternoon out on Reston’s trails on their fat tire bikes.

It took a while for snow of any accumulation to arrive this year in Reston, but on the first full day of spring, Mother Nature delivered during the fourth Nor'easter in three weeks, dropping 4-5 inches of snow. The sudden soggy mess was enough to cancel schools in the region but not enough to down trees and make the roads impassable.

With most main and secondary roads cleared by mid-afternoon, many families bundled up and headed out for a day of winter fun. For some, it was sledding at two of Reston’s most popular destinations, "Mount Reston" and "King Kong Hill."

"Mount Reston" is located behind the Unitarian Universalist Church at 1625 Wiehle Avenue. The only words for the sledding and snow tubing run are "unexpectedly enormous and L---O---N---G.” The hill goes on and on and on, down and down creating an adrenaline rush for sledders from the speed and their possible rendezvous with the shallow stream in the valley at the bottom of the Mount. Warning, to parents with little ones, after the exhilarating ride down, it is a substantial hike back to the top of Mount Reston.

"King Kong Hill" is another sledding destination; appropriately named as it is a steep fast run, not for the faint of heart. Located on the Hidden Creek Golf Course, it is a bit of hike to get there from the car but well worth it. It too has a stream running the length of its valley.

For Ray Nahorniak and Gus Koustens the snow was no match for their fat tire bikes. They enjoyed the afternoon riding many of Reston’s paths.

At least Mother Nature pulled through and did not let snow enthusiasts in Reston down in 2018. Forecasters state the chance for any further snow accumulation in the near future is zero. Temperatures are predicted to climb into the 50s and 60s for last week in March and first week in April. Pack up the sleds, snow tubes, and exchange them for pool noodles and swim goggles. Memorial Day Weekend is only eight-and-a-half weeks away.