Something to Celebrate in Tysons
Votes

Something to Celebrate in Tysons 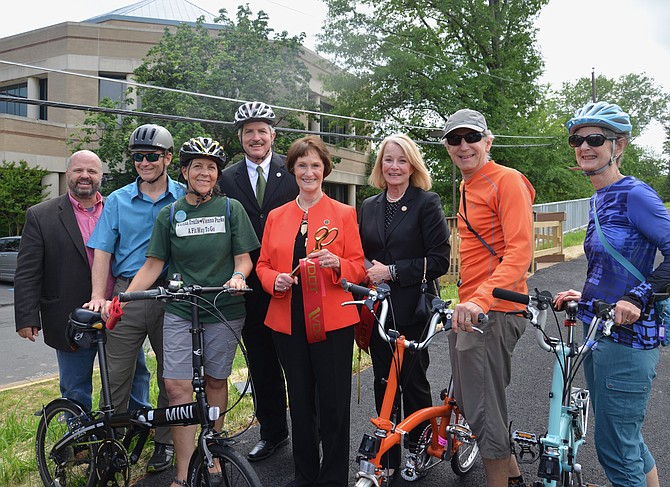 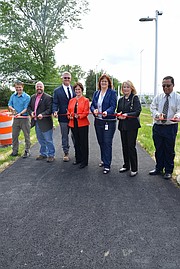 With the snip of the ribbon – officially opening the pedestrian/cyclist trail connecting Route 7 from the west, over the Dulles Toll Road into Tysons, and celebrating the completion of the project that included widening the bridges over the highway and improved ramp accesses between the two major arteries.

What it’s all about – safe, efficient, alternate options for transport to and from the thriving and growing Tysons area, connecting to all its offerings and to the Spring Hill Silver Line Metro station.

Cooperation. Collaboration. Alliance. Partnership – words that were repeated throughout the remarks made by the speakers to those gathered on May 22 to celebrate the official opening of several multimodal improvements at Route 7 and the Dulles Toll Road in Tysons.

It took all of those things to bring the $47.5 million project to completion, “ahead of schedule and under budget,” said Bill Cutler, the Virginia Department of Transportation (VDOT)’s District Construction Engineer for Northern Virginia.

Cutler praised the excellent working relationships between VDOT, the Northern Virginia Transportation Authority (NVTA), the Fairfax County Board of Supervisors and staff, lead construction contractor Wagman Heavy Civil, and members of the community for making the project a success in enhancing connectivity for cyclists, pedestrians and motorists in the area. As he read name after name of agencies, companies, and individuals, Cutler joked that the list was like “the credits at the end of a movie” but that it was a fact that without that additional cast of characters, the complex project, with so many moving and interconnected parts, could never have been realized.

“A success story in cooperation,” was Martin Nohe’s categorization of the work that rehabilitated the two Route 7 bridges over the Dulles Toll Road, and widened the road from four to six lanes between Tyco Road and Jarrett Valley Drive. Nohe, the Chairman of the NVTA and Prince William County, Coles District Supervisor, added that it wasn’t just people crossing the expanded bridges with less congestion, but “technology and data are flowing across as well,” referring to the inclusion of considerable quantities of new fiber optic lines that were added as the bridges were re-built.

Fairfax County Board of Supervisors Chairman Sharon Bulova said it was a real pleasure to “reach this finish line,” calling the project “essential” for the economic health and future of the region.

BULOVA pointed to the window behind her in the meeting room of the Sheraton Tysons Hotel, where the celebration began. “This venue couldn’t be more appropriate,” she declared. “From here we can see all of our transportation efforts coming together.” Almost as if it had been painted for the occasion, the window framed a view of the Silver Line Metro rail, the new pedestrian/cycling trail that crosses the Toll Road, a portion of the widened bridge, and the new ramps leading from the Toll Road onto Route 7.

In addition to widening the bridges, the project earned its designation as a multimodal effort by constructing a bicycle/pedestrian link from the west with almost 6,000 feet of lighted path. Offering a non-motor alternate access to the Spring Hill Metro station in Tysons, the plan is to connect future western trails to the the new pathway.

TUNNELS under, and walkways over, the Dulles Toll Road were also incorporated into the project.

“It’s fantastic, what they’ve done,” said Jenifer Joy Madden, cycling enthusiast and advocate. Madden rode to the event from Meadowlark Botanical Gardens in Vienna. “That would have been impossible before these improvements.”

Madden joined Fairfax Alliance for Better Bicycling (FAAB) president Jeff Anderson, and fellow FAAB members Bruce Wright and wife Keri Hitt in the pedal-power cheering section at the event. After the official ribbon-cutting, the four were later joined by Cutler for a celebratory bike ride along the trail.

And what were the findings after the inaugural spin? According to Anderson, “First class! Looks like a lot of fun! This should be an example for others to follow.”

“We usually get only complaints or pointed suggestions” about transportation from our constituents,” acknowledged Virginia Del. Kathleen Murphy (D-34), whose district includes Vienna, McLean and Wolf Trap. A project that helps ease congestion, contributes to data and technology flow, offers multimodal transportation options and is deemed “fun” by a member of the public, must be music to the ears of all who participated in the “cooperation, collaboration, alliance, and partnership.”