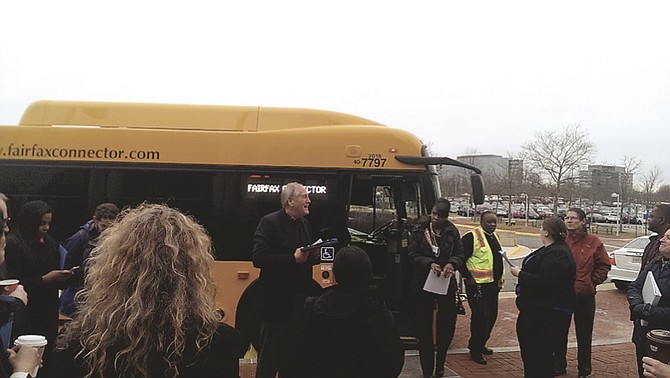 On bus tour of completed, pending and future projects hosted by state Sen. Dave Marsden (D-37), center, a group of legislators and transportation organization leaders explained how thanks to a landmark bill that passed out of the General Assembly three years ago, there is hope for a more effective transportation network. Photo by Tim Peterson. 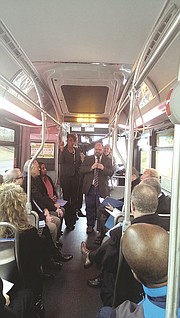 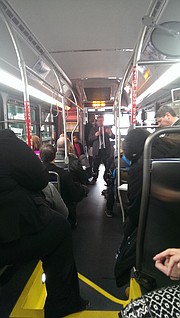 Nicholas Donohue (center) is deputy secretary of transportation for the Commonwealth of Virginia. He said per lane, express lanes on I-95 move more people daily thanks to carpooling than general purpose lanes.

A parking garage for the Dulles Metro station is being constructed on the other side of the Dulles Access Road.

Drivers sitting in that traffic may not agree with Nohe. But on a bus tour of completed, pending and future projects hosted by state Sen. Dave Marsden (D-37), a group of legislators and transportation organization leaders explained how thanks to a landmark bill that passed out of the General Assembly three years ago, there is hope for a more effective transportation network.

Marsden is the ranking member of the NOVA delegation on the Senate Transportation Committee.

Del. Vivian Watts (D-39) is former Virginia Secretary of Transportation and Public Safety. She was the first one to take the microphone on the rolling press conference.

Since July, 2013, Watts said, HB2313 has produced more than 1.25 billion new dollars that were raised, controlled by and ultimately used in northern Virginia for transportation improvements.

“Getting the best return on the dollar to move people, support Northern Virginia’s dynamic economy and reduce pollution demands that state, federal and local governments work together,” Watts said. “The more we know about specific needs, the better we can shape win-win solutions.”

The projects on the bus tour, from an expanded bus garage at the West Ox transportation facility to the Wiehle Reston East Metro station, span Fairfax County and parts of Prince William, Loudoun and Arlington.

“Great strides have been made in moving people throughout Northern Virginia but there is much more work to be done,” Marsden said.

“It’s been a great opportunity to learn about other areas,” Boysko said.

Improvements for multiple modes of transportation are planned for 22.5 miles of the I-66 corridor, including two express lanes in each direction, three general purpose lanes in each direction, safety and operational improvements, expanded carpooling alternatives and new and upgraded bike and walking paths. The $2.3 billion project is expected to begin construction in the fall this year and be completed by August 2022.

The new facility cost of $38,688,050 is being funded by the NVTA from regional revenues and DRPT from state grant funding. It will help with overcrowding at the PRTC Transit Center in Woodbridge and house commuter buses that are part of the I-66 Outside the Beltway project. Construction is expected to begin in summer 2017 and be completed by spring 2019.

The Broad Run station is projected to be at capacity for operation by 2018, so sites in Prince William County and the City of Manassas are being considered for relocating and expanding the station.

The $99 million project features 2,300 parking spaces, 45 Kiss & Ride spaces, ten bus bays and a secure bicycle parking facility for more than 200 bicycles. Construction of residential space is also complete, and additional office, hotel and retail space is set up by the facility.

Construction on the $46.5 million project began in April 2016 and is expected to be completed in spring 2018. It was funded by NVTA bonds and federal and state contributions.

Widening will expand four lanes to six over nearly seven miles and cost $233.9 million. The goal is reduce traffic congestion and improve safety and mobility for cyclists and pedestrians.

I-66 eastbound is being widened from two to three lanes, over about four miles. Ten multimodal improvements total $9.8 million and include new and enhanced bus service, bus stop improvements, bike-share programs and other new technology. Those projects as well as tolling are expected to begin in mid-2017. Construction will begin on the new eastbound lane in early 2018, with the new lane expected to open in late 2020.

$7.2 million project to expand the commuter park and ride facility was completed May 11, 2016.

The plan is to expand and convert two existing two-way HOV lanes to three High Occupancy Toll or Express Lanes for eight miles from Edsall Road to Eads Street. Construction is expected to begin this year and be completed in 2019.

Approximately $113,994,000 has been funded by the NVTA for improvements along Route 28 in Fairfax, Prince William and Loudoun counties, and the City of Manassas. Construction is underway widening three lanes to four, and is expected to be completed beginning in summer 2017.

In FY 2017, 1,086 miles are planned for paving, including 28 interstate, 137 primary and 921 secondary roads. The secondary roads are divided nearly evenly among Prince William, Fairfax and Loudoun counties.