A leak from area underground gasoline tanks no longer a threat to the private wells. 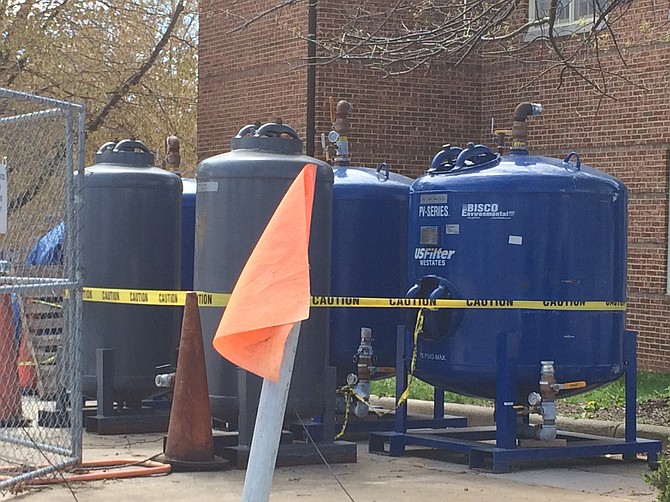 Some of the equipment in use in Spring of 2016 to address groundwater contamination at a former gas station. Great Falls Citizens Association closely monitored the cleanup, and now agree that there is no ongoing threat to groundwater. File photo by Ken Moore/The Connection

After years of working with multiple local agencies to clean up the groundwater contamination from the former Exxon station (where TD Bank now resides, on the west side of Walker Road and Georgetown Pike), the Great Falls Citizens Association (GFCA) reports that residents are safe from Methyl Tertiary Butyl Ether (MTBE) in their wells.

Bill Canis, the President of GFCA, said, “For the past five years we have been working with the Virginia Department of Environmental Quality (DEQ) to clean up a major leak from area underground gasoline tanks. So much of Great Falls is on well water that the MTBE chemical released into the bedrock posed a threat to parts of this community. The civic group that led the effort locally is just now submitting a final report as the clean up wraps up.”

Glen Sjoblom, a resident for 46 years and former Environmental Protection Agency (EPA) employee, co-chaired that civic group called the Special Committee on Groundwater Contamination, formed by the GFCA. They recently submitted their final report to the GFCA board and all elected representatives.

“This contamination by MTBE (Methyl Tertiary Butyl Ether) no longer represents a threat to the private wells in the immediate vicinity. We had a very good working relationship with the Northern Division of the Virginia Department of Environmental Quality, particularly Alexander Wardle, the project manager for this case, and Mark Steele of Kleinfelder, the environmental company working for Fairfax Petroleum, the owner of the [former Exxon Station],” Sjoblom reported.

But how clean is “clean enough” since it’s not possible to get it all out? DEQ has a policy that cleanup won’t stop if there’s detectable MTBE found in wells. Through a risk analysis, they derived end points in 2014 to test. End points were checked once a month and Kleinfelder, the company responsible for the actual clean up, issued reports every three months. The last monitoring report was less than 1/100th of the end point, well within the safe levels for water usage. There is post cleanup monitoring that will go on for the next two years as an extra precaution.

Alex Wardle said, “working with the GFCA was a positive process … the onsite system is closed down. There will be continued closure monitoring, and residents can go to the DEQ website to access those monitoring reports.” Link: https://www.deq.virginia.gov/Programs/LandProtectionRevitalization/PetroleumProgram/Clean-upActivities/GreatFalls.aspx.

Matt Tonkin, an independent scientist who advised GFCA on the cleanup plan, agreed. “It is unfortunate for all parties when a release of gasoline impacts the environment … Local communities that educate and inform themselves can play a critical role in this process by communicating directly with regulating agencies and responsible parties. The GFCA is the ideal local community organization for such participation and oversight, and I am happy to read in the Final Report of the GFCA Groundwater Contamination Committee that in this case, a mutually acceptable level of protection and groundwater cleanup was achieved.”

Mark Steele and the Kleinfelder company were unavailable for comment.