Home Sweet Home Only a Few Months Later in Arlington 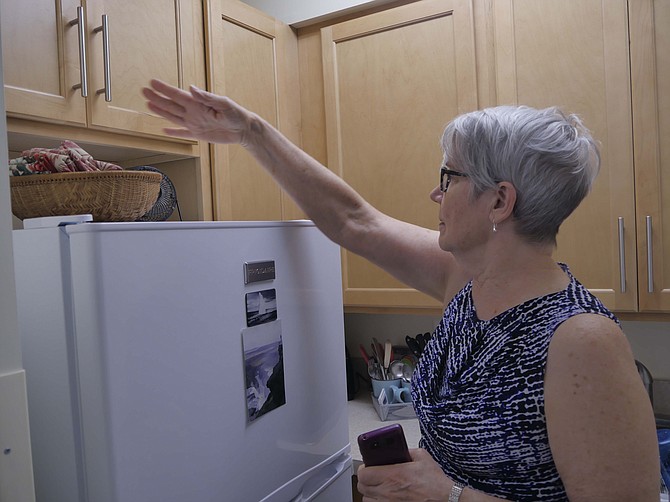 Mary MacCarthy points to the new kitchen cabinets in her renovated apartment at Culpepper Garden. Photo by Shirley Ruhe. 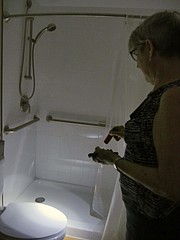 Lights suddenly go out due to construction so Mary MacCarthy points her flashlight to highlight the new shower in her bathroom. It replaced a bathtub that can be difficult for seniors to navigate.

Geraldine Quinn sits in the living room of her newly renovated efficiency apartment in front of her bare walls. She says the walls have no pictures since the construction workers are still working on the apartment next door and "the pictures could jiggle right off the wall."

Culpepper Garden broke ground April 11 on a major renovation of 204 low-income apartments built in 1975 for seniors. Mary MacCarthy, one of the first residents to move back into her newly-renovated efficiency apartment, sits at the table in her living room. She says she moved out June 18 and moved back in Oct. 19. MacCarthy says, “The move was sweet. The moving company agreed to put everything in the exact position in my temporary apartment one floor up.

"They never asked us to box up anything. It was finished in a matter of hours, and nothing was broken." She says she did pack up her knick knacks and her boxes of books. She was a long-term sub English teacher in Loudoun County and is very particular about her books — Scandinavian (“The Girl with the Dragon Tattoo” which is so much better in the original language), her Shakespeare texts from high school, the Lake Wobegon series.

MacCarthy says, "I asked to be part of the first move to avoid the noise." She continues,"It's noisy. Sound travels. It starts at 7 a.m. on the dot." As if on cue a hammering ricochets from down the hall. MacCarthy moves to the kitchen. "It's much better in the kitchen. The cabinets were ugly, dark and the top shelf so high you couldn't reach it." Now the kitchen has better lighting and ventilation with a stove fan as well as new cabinets and a new fridge.

The lights in the apartment suddenly blink off. "Sometimes that happens. They will go back on soon." She picks up a flashlight and heads around the corner to show off the newly-remodeled bathroom. "This was another big improvement. They took out the bathtub and put up the handrails. We hate the handrails," but she points to the large mirror affixed to a generously-sized medicine cabinet, new flooring. It's fresh; it's new."

Another advantage to the redo is newly-installed individual thermostats in each apartment that allow each resident to control the temperature of the apartment. "There used to be an overlap of still hot outside and we didn't have access to air conditioning at the end of the summer."

She says they are going to try to put laundry rooms on each floor and bathrooms for visitors and aides. "Now you have to do laundry in the basement. We don't know yet what hours we will have access to the laundry room. I hope it's early and late." She says they have community meetings every month in which a representative from the builder tells them about the next stage. "We know so little."

She says she likes living at Culpepper Garden. It's like an unbelievably small town like where she grew up — and so smart with transportation. She can take the bus and walk anywhere she wants to go. Also she loves the small space— from four kids and five bedrooms to an efficiency apartment with just enough room to put out her books and her sewing machine where she makes some of her own clothes.

Next door, Geraldine Quinn also sits in a living room lit only by the outside light coming through her large picture window. She said she moved out of her efficiency apartment on Aug. 10 to one floor below but was back in her newly-renovated space on Oct. 19. "I was surprised that I moved out and back in so quick. I had no idea that was going to happen."

“The only thing that bothered me was I couldn't see the new place before I moved in. I didn't know how big the space was. You can see I am loaded. That was my problem." She points to several trunks stacked with her genealogical albums. She characterizes her style as "early thrift shop and give away vintage."

But Quinn says, they didn't take the time to set up or put the furniture in the same location as her old apartment. She says she learned her lesson on the move back in, and "I asked could the men come back later and move this around. "They were very, very good to do it."

Her computer isn't set up yet, but she is in no hurry. They have a computer space downstairs with volunteers who can teach you anything you want. She points to the bare walls. "I can't put up pictures yet, because they are working on the apartment next to me and the pictures might jiggle right off the walls." She says that resident is due to move in the next weekend "but the noise is not going to stop because there is another floor of apartments being worked." Approximately 40 apartments have been completed to date.

Quinn walks into her new kitchen. "Somebody did a beautiful cosmetic job on the cabinets. The appliances are new, and the lighting is excellent which is important. You see, I added a cabinet of my own. I am so grateful for the extra wall space." She stops a minute and listens. "At least the jackhammer has stopped. The noise was so horrendous."

Her neighbor knocks on the door to hand her a notice about the scheduled power outage from 10 a.m.-2 p.m. today due to construction.

Quinn worked for the Army so has lived all over and is very used to moving, "but at 82 I intend this to be my last move." She says she didn't expect to end up in elderly housing but, "I think it is a wonderful situation. I am happy to be here. They have such extensive schedules of things going on. It's so alive and bustling."

Quinn says, "You can go down and listen to music. They had karaoke night and it was a lot of fun. They had politicians come in," and she adds, "the chef is just marvelous. He is a very unique person to be associated with an institution like this." However, Quinn says that when they gave the residents the opportunity to opt out of the mandated one meal a day, she took it. "It was a real savings for me and a necessity."

Her next task will be what to do with the trunks full of genealogy albums. "I have 40 albums this size with seven generations documented. This picture is of seven brothers in the military. That generation just died. She thought she would just start with cousins "but it's so addictive" and she has been collecting for 35 years.

Culpepper Garden is an affordable nonprofit retirement community dedicated to serving low-income seniors aged 62 and older. They opened in 1975 with 204 independent living apartments that were expanded in 1992 with the addition of 63 one-bedroom apartments. Assisted living was added in 2000 with 73 one-bedroom apartments. According to Linda Kelleher, executive director of ARHC, the current renovation effort is expected to be completed in 2020. It is being funded by low-income housing tax credits, Arlington County Affordable Housing Investment Fund and Virginia Housing Development Authority.