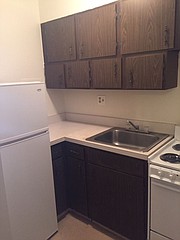 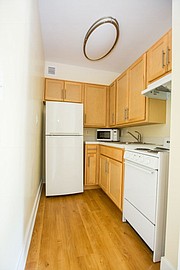 Just a shovelful of dirt tossed in the air. But it will mean renovation of 204 apartments at Culpepper Garden for low and very-low income seniors age 62 years and older so that they can age in place. A groundbreaking event will be held on Wednesday, April 11 from 1:30-2:30 p.m. at Culpepper Garden, located at 4435 N. Pershing Drive. Katie Cristol, chair of the Arlington County Board, will give opening remarks at the brief program and ceremony.

Susan Philp, chair of Arlington Retirement Housing Corporation (ARHC), the non-profit owner of Culpepper Garden, says the ARHC Board began working on the project in October 2012 and it is expected to be completed in early 2021.

Linda Kelleher, executive director of ARHC, adds that action had been ongoing when she arrived in October 2015 and the architect had already been chosen, as well as the selection of Wesley Housing Development Corporation, the nonprofit partner who would lead them through the process.

Apartment renovations will include the installation of individual cooling and heating controls, as well as new windows, bathroom fixtures, new kitchen cabinets and fixtures and new floors as well as walk-in showers instead of bathtubs.

Dee Bevins, president of the Resident Association, says one of the big positives for her is “having real kitchen cabinets. We have two little shelves right now that can’t hold much and since most people are short the shelves are too high to reach.”

Bevins adds another positive is the walk-in showers. “Even as agile as I am, I use cream rinse on my hair, and the floor gets slick. I have a fear of falling.”

Kelleher explains that when the original units were designed years ago they didn't understand the needs of this age group. Ten percent of the apartments will be fully handicapped accessible with such accommodations as lower counters in the kitchen and turnaround room for wheelchairs.

In addition, there will be extensive building renovations, including a new roof, replacement of major systems and substantially upgraded elevators. Kelleher says elevators breaking down were a significant problem.

Residents will be temporarily relocated on site during the renovation with phased renovation on 14-16 apartments at a time. Kelleher says they estimate it will take 6-8 weeks for each apartment to be completed. She said it could be completed quickly since they are not tearing down any walls

Bevins said, “But for me it’s no big deal. I’ll just put everything in boxes and they’ll move it for me and then move it back.”

Kelleher says one of the most important changes for the residents will be the ability to control their own heating and air conditioning. While the second and third additions have PTAC units, the original 204 oldest units had to decide as a group every year when the heat went off and the air conditioning was turned on.

And Bevins says, “having your own hot water. It used to get cold from everyone using it. Now we’ll have an on-demand system.”

In terms of the bigger public space, one thing the residents requested and they were able to accommodate was a change in the laundry facilities. Currently 267 apartments are sharing five washers and dryers. "Now washers and dryers will be located on each floor and the residents can use a table instead of chairs cramped in a corner."

She adds they will also be relocating services together on the lower level including things like the computer room, doctor space, meeting space for programs and a physical therapy area. Bevins said, “We don’t’ really know what’s going on with the public space but one improvement will be the mailboxes. A lot of people are too short to get their mail. I have to stand on tiptoes.”

Culpepper Garden is Arlington's largest affordable community for low-income elderly and the only one that offers both independent and assisted housing. There is currently a year waiting list for the independent living units. Culpepper Garden includes a diverse population with 48 percent Caucasian, 12 percent Hispanic and the Asian and African American populations both 8 percent. The oldest resident is 101 years of age and the average age 77 years old in independent living and 87 years old in assisted living.

Bevins says the affordability of Culpepper Garden is the big positive for her because she grew up in the Midwest where living was cheaper but moved here for her daughter and grandchildren. “And I’m just a country girl, and lots of little trees here is wonderful.”

Kelleher explains that Culpepper is committed to creating a community of services to reduce social isolation and increase wellness among its residents. But they are also committed to charging the lowest rents that are necessary to fulfill their mission and little is left over to support these programs. "So we rely heavily on volunteers." For instance they have two people who work with residents on their needs such as health, transportation or confusion about insurance forms.

In addition, Culpepper Garden provides a medical suite for doctors on site but forgives them their rent. "A beauty shop, the same thing." She added, "we have chair exercises but no one teaches it right now. We just have a video. We can't afford it." So they work with volunteers, faith-based communities, volunteers from the business community and nonprofit partners to provide what they can.

The average income of Culpepper residents is less than $18,000 a year with 89 percent of the residents having income of less than $30,440. Rent is based on the building, HUD program and rental subsidy. For instance, Kelleher explains that they have applied to HUD to get vouchers, which would reduce the rent for 141 of their residents. "This has been particularly difficult. We know we qualify and we know the money is there but we can't even get a response from this Administration."

She says they are getting closer and closer, and ARHC has expectations that they will receive approval of the voucher, which will mean residents will only be required to pay 30 percent of their income for rent. "But if we do not get the voucher, the ARHC Board has a short term and a long term plan to subsidize all residents. They are committed to ensure that no current resident is unable to live at Culpepper Garden."