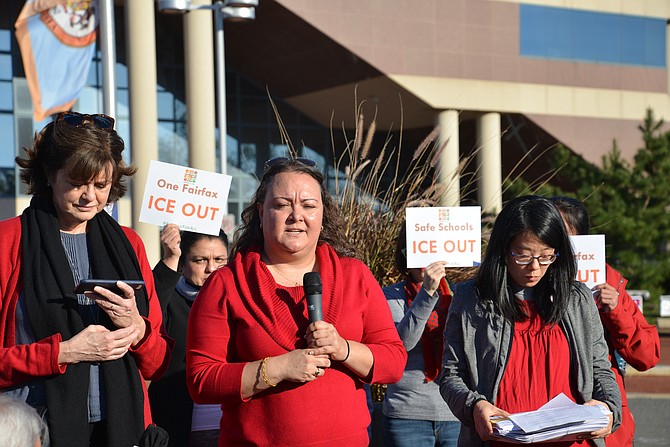 From left, Mary Lareau (DMV Sanctuary Congregation), Michelle LaRue, M.D. (CASA in Action) and Sookyung Oh (NAKASEC) speak on behalf of their Fairfax for All coalition. The group says that the county’s One Fairfax Resolution fails to address the immediate issues being faced by immigrant residents. Photo by Andrea Worker.

Members of the Fairfax for All Coalition outside Government Center demanding that the Board of Supervisors adopt their Ordinance to Protect Equal Justice for All which would end sharing information with ICE, end releasing immigrant detainees to ICE, and establish a legal fund for immigrants among its components. 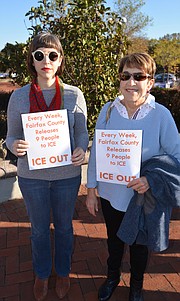 Elizabeth Benson and Sharon Canner of Reston show their support for the Fairfax for All Ordinance to Protect Equal Justice for All. “We should do everything we can to protect and support all of our residents,” said Canner. “Immigrants to our area are vital to our growth and success. It’s a business issue as well as a human one.”

A determined group of citizens advocating for immigrants’ rights held a press conference outside the Fairfax County Government Center on Tuesday, Oct. 29, before heading inside where several members of the Fairfax for All Coalition provided testimony during the Board of Supervisors’ meeting.

The coalition is demanding that the Board adopt their “Ordinance to Protect Equal Justice for All” which they drafted and presented to the Supervisors in February of this year.

In a recent written response to the group, Board Chairman Sharon Bulova cited the joint passage of the One Fairfax Policy by the Board and by the Fairfax County Public Schools’ Board in 2016, which pledges their commitment to “intentionally consider equity when making policies and delivering programs and services.” One Fairfax outlines 17 areas of focus, including housing, health and human services, and public safety, as areas that “must be addressed to create an equitable community.”

In the response, the Chairman wrote “As I have said in the past, I do not plan to pursue the Ordinance to Protect Equal Justice for All.” Bulova’s reasoning, beyond the existence of the One Fairfax resolution, is that the ordinance calls for the complete severance of the county’s cooperation with ICE (Immigration and Customs Enforcement), something the county is not prepared to do since “we work with outside law enforcement agencies like ICE on criminal matters like gang prevention, human trafficking, and cyber crimes.”

SPEAKING FOR FAIRFAX FOR ALL at the press conference, Michelle LaRue, M.D., Virginia State Director for CASA, fired back that One Fairfax without their ordinance “lacks teeth.”

Sookyung Oh, a member of the coalition and the Area Director of the National Korean American Service and Education Consortium (NAKASEC) added that without the accountabilities and direction of the ordinance “One Fairfax is just an abstract,” applied to nothing tangible and basically just another “checklist.”

Both speakers acknowledged that the Fairfax County Sheriff’s Office has terminated its “Intergovernmental Service Agreement” with ICE as of May 23, 2018. Under that agreement, the Sheriff’s Office would hold detainees for ICE past their release dates. In a statement announcing the termination, Sheriff Stacey Kincaid said “We intend to comply with all federal obligations as they pertain to ICE … but the current contract is not necessary for us to do this … we found it expedient to no longer have an agreement that requires us to extend our resources beyond these obligations.”

“But they are still collecting the personal information of people arrested and detained and sharing that information with ICE and others,” said Oh. Even with the termination of the agreement between the Sheriff’s Department and ICE, Oh says that 73 people were released to the Immigration authorities between August and September of this year alone.

“Of those 73 people, 50 of them were never even convicted of the charges they were arrested for,” said Oh, adding that for many of these same charges, “others have been let off with warnings or fines, not sent to jail and then ripped from their families. That is not equality for all in Fairfax County.”

The coalition thinks that without their ordinance, the county is basically leaving many of its most vulnerable residents open to discriminatory actions and adversely impacting thousands in the region. According to the coalition speakers, 1 in 4 families in Fairfax County have a parent or guardian born outside the county.

“And it’s not just about collaborating with ICE,” said LaRue, and Mary Lareau with the DMV Sanctuary Congregation.

Fear of family separation is keeping children from school, parents from work or from seeking needed medical attention, says Lareau. Lareau and her fellow advocates say that this same fear is hampering the safety of us all, as immigrants fail to report criminal activity or to come forward to cooperate in criminal investigation.

“Turning people over to ICE, that’s the real crime. How is any of this helping us to make our communities safer places?” asks LaRue.

Reached for comment, Karla Bruce, the county’s Chief Equity Officer charged with championing the One Fairfax Resolution, said she has met with members of the coalition, and other immigrant and civil rights advocate groups.

“I can’t speak to the individual Board members’ stance on the group’s proposed ordinance, but I can say that since taking over this role in June, I have been meeting with as many parties as possible, internally and externally. I want to listen, to hear what the concerns are and see how our policies may be negatively affecting, even if inadvertently, our residents.”

Bruce said the County is sincere in the desire to implement One Fairfax, but that it’s not something that can be achieved overnight, even while she acknowledges the frustration of groups like Fairfax For All.

“We are trying to see where changes are needed in the entire system,” she said. “Yes, there are individuals who are experiencing negative impacts today. We have to keep at it and I want to keep hearing from groups like this.”

AFTER THE PRESS CONFERENCE, several of the coalition representatives gave testimony before the board, some recounting personal struggles as immigrants or family members of immigrants, including a young man named “William” who is fearful that his stepfather is about to be deported. “He has been everything to me. I need him. I still need him.”

Others, like Ruth Maul of Herndon, spoke of how domestic violence victims refuse to come forward for treatment or protection because of their fears of being deported or separated from family members.

Marcella Levine told the Board that “you don’t have to be a sanctuary county to adopt more non-compliance regulations.”

Before the meeting was gavelled out of session, the members presented more than 500 signed petitions they had collected in support of their ordinance.

“They say we don’t have support from the community,” said Oh of NAKASEC, “but we do, and we are gathering more each day.”

Fairfax for All vows to continue to advocate for immigrants in the region and to continue to “bring these friends, neighbors, co-workers, families, and congregants under our full protection.”

The full text of the proposed ordinance is available on the website www.fairfaxforall.org.