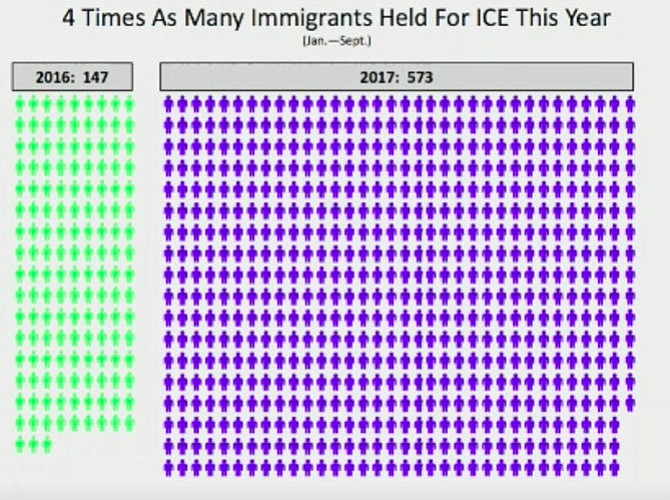 “County officials have assured us they will not collaborate nor enforce immigration law, but recent actions put the lie to these assertions.” — Matt Bakker, speaking for a coalition of Fairfax advocates for immigrants

“Who Are They?” Statistics on immigrants held in jail for ICE pickup and deportation.

“How They Get There:” Interaction with local police can land undocumented immigrants in ICE custody in a variety of ways. 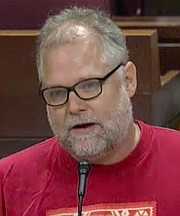 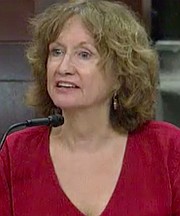 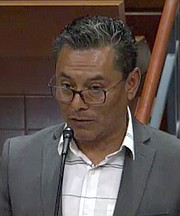 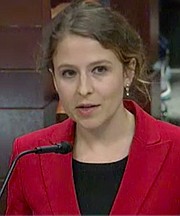 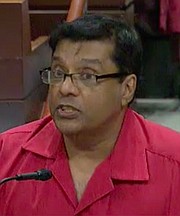 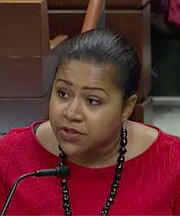 Fairfax County “is making money off the suffering” of the immigrant community, said Matt Bakker.

“Worst of all, Fairfax County through its Sheriff’s Office maintains a contract with ICE [U.S. Immigration and Customs Enforcement] to hold immigrants within the Adult Detention Center as if they were under federal custody,” said Bakker, who spoke on behalf of a coalition of advocates on immigration.

“They also act as informants and they tell ICE where to find the person,” said Diane Burkley Alejandro, of ACLU People Power.

“This is aiding and abetting,” she said.

Fairfax County has turned more than four times as many immigrants over to ICE in 2017 as they had by this time last year, including 100 people in September alone, according to Alejandro. Immigrants are often jailed when others would be cited and released, she said.

“These people end up in ICE custody through the police. Police send people to jails when I would be given a summons,” said Alejandro. “The Police and Sheriff admit they do not have to hand over a single person to ICE; they do it anyway.”

Six people waited more than eight and a half hours on Tuesday, Oct. 24, to speak before the Board of Supervisors during the public comment period at the end of its regularly scheduled board meeting.

“Current policies of cooperating with ICE are ripping holes in the fabric of our community. We’re better than this,” said the Rev. Alexis Vaughan Kassim, of the DMV Sanctuary Congregation Network.

THE BOARD VOTED to adopt a resolution on April 4, 2017 pledging non-cooperation with federal government on immigration law except when serious criminal activity is involved.

Chairman Sharon Bulova stated in her Board Matter that same day: “Fairfax County is a welcoming and accepting community where residents of all backgrounds deserve to feel respected and safe. It is important that we, as local leaders, speak out when our constituents are concerned regarding policies or practices that may affect them. We are a safe, diverse and caring community, and if that harmony is threatened, I believe we have a duty to speak out and clearly articulate our values.”

WORDS ARE NOT ENOUGH, the advocates said.

“County officials have assured us they will not collaborate nor enforce immigration law but recent actions put the lie to these assertions,” said Bakker.

“Fairfax by its actions has embraced ICE’s mission of ensuring the deportation of all undocumented immigrants whether or not they have committed a crime and the data will show that,” said Alejandro.

“Our demand is simple,” she said. “Equal justice and liberty for all. More specifically, the county needs to treat immigrants as they do all other people.”

“All of our faith traditions call us to stand up for the humanity of our neighbors, to resist labeling undocumented residents in our community as criminals and outsiders, and to oppose policies that lead to the detention and deportation of our families, friends and neighbors,” said Vaughan Kassim.

Being undocumented is not a crime, said Allie Boldt, senior counsel with Demos, which conducts analysis of how county policy must be strengthened to protect immigrant communities “who are facing unfair and terrifying policies at all levels of government.”

“The legal landscape allows the county to do a lot more to protect its immigrant residents who are represented here today. In fact, the Constitution even requires some of these changes,” Boldt said.

Boldt asked the county to end arrests and detention based on civil immigration matters, to restrict when and how information about a person’s immigration status is shared, to accept a wider range of identification documents, and to ban county contracts and agreements to perform and facilitate federal immigration law enforcement.

A DECLARATION was read in English by Bakker and then in Spanish by Jorge Mendez, representing CASA.

They requested that the county terminate any agreement with ICE, including agreements between ICE and the Office of the Sheriff; that the police department update its general order so “it protects our community rather than attack it;” that traffic and safety policing no longer lead to detention and deportation of immigrants; that the Sheriff’s Department no longer honors ICE requests to detain immigrants unconstitutionally; that the juvenile detention authorities no longer share information with ICE; and that county buildings, including schools and courts, be “safe spaces” that “forbid entry to ICE officers.”

“With this declaration we demand that all authorities in Fairfax County end their agreement and voluntary and unnecessary collaboration with ICE. In place of your ineffective statements of support, we need policies that guarantee non-cooperation with ICE,” said Bakker.

“An atmosphere of fear, intimidation, arbitrary detention and xenophobia is not compatible with the ethical basis of our ... community nor with the continued economic vitality and social progress with which Fairfax County has up to now been an exemplary model,” said Fairfax resident Govind Nair, of the Northern Virginia Ethical Society.

BULOVA THANKED thanked the speakers for their work, testimony and advocacy.

“This is a difficult time in our world and in our community and in this country,” Bulova said. The board is required to strike a balance “between making sure we continue to be a welcoming place, a tolerant place where people from all over the globe have felt comfortable coming to,” she said, and “making sure we are protecting the public.

“We do have issues of human trafficking and gangs that do require our cooperation. Everyone deserves to be safe.”

She said the board awaits response from the police chief. “We should be hearing back.”