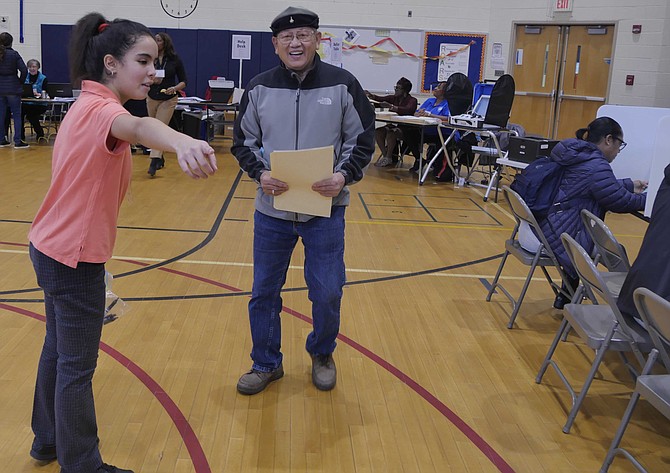 Layla Janah is a blur of activity as she works up and down the 13 double-sided voting booths at Samuel Tucker Elementary School on Election Day. Janah is an election page who is assisting voters with answering questions and giving directions about the voting process.

Janah is one of five Moroccan students in the International Academy at T.C. Williams High School. She arrived at the polling place at 5 a.m., and people were already there setting up. "Hello sir. You just go right there," she says pointing to a nearby chair. "I make sure everyone has a pen. I've lost a lot of pens today."

Ponytail bobbing, she races down the room with a pile of empty folders to be refilled with new ballots. Then she spots a chair out of order and replaces it neatly for the next voter. A woman approaches with a puzzled expression. The woman is clutching a blue sample ballot. She says, "I don't know any of these people and it doesn't list a party affiliation for some of these candidates."

Janah says, "There has been a lot of confusion like this today. There are a lot of boxes and they don't know what to do." There are a number of people asking for Republican sample ballots but there is no one outside the building handing them out.

She says there is a trashcan in the corner filled with discarded blue ballots. "When the volunteers run out, they just go to the trash can and take out a supply to use again."

Janah says her mother took her along to the polls in Morocco, but this was unusual in the tiny area where she lived, where mostly men vote. "Women don't think it is important; nobody is going to care." She says women there get married and have children. Most of them don’t work. ”They don't wait to finish school to get married. Some are married at 14." But she says, "my mom doesn't think that way." She explains that in a big city, people are educated, but not in a small area like where she lived.

In Morocco there is a king who is always the king. "But we vote for those who work for the king changing rules in education and work. Janah thinks in America "a lot of people vote” and "yes most of them here early this morning were women.” The first person in line, "she was there first."

Janah became an election page as part of a school project. She says in school she tries to solve problems on how to make T.C. united. A teacher could see she was one of the students making a positive change and urged her to apply for the internship. Janah says she went to training to know what to do.

Janah has been in America two years and tries to be involved in American society. "I always try to have experiences in life, and it helps me learn the language. Janah plans to attend Old Dominion and then get a job in America. "I am 18 now but I can't vote because I only have a green card." But she waits for the day when she will be able to vote in America.

In the area where she lives in Morocco not many people vote, "but it can make the future bad or better. I would tell them it only takes 10 minutes of your life.”